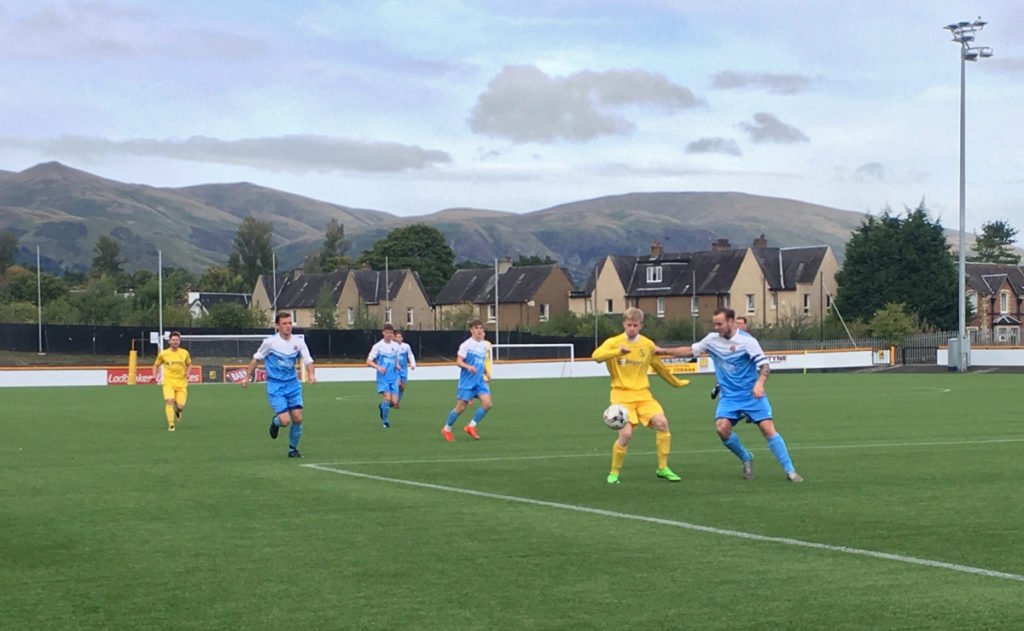 A group of teams from the league were involved in South Challenge Cup action this weekend so we have a wee half card of fixtures in this week’s SLFL Roundup.

First, a call for volunteers! We are keen to bring in a few volunteers who would be willing to compile short match reports (around 150 words) on SLFL matches which would allow us to have two or three featured games every week. Please send a wee email to michael@slfl.co.uk if this sounds like something you’d enjoy.

Let’s start off the SLFL Roundup proper at Ainslie Park where Gretna 2008 were the visitors as The Spartans looked to keep up the pressure on the leaders. It was an incredibly close match throughout and became even tighter on 62 minutes when Jack Hunter saw red for the Black & Whites. An excellent defensive display kept the score level at 0-0 going into the 90th minute, but Blair Atkinson popped up in the second minute of injury time to give Spartans a valuable win and leave 2008 irritated.

Cumbernauld Colts will have travelled to Hawick Royal Albert‘s Albert Park on Saturday confident of adding to the home side’s woes. New Hawick manager Craig Tully has already added to his squad and made six changes to the side which lost 9-0 to BSC Glasgow last weekend.

The difference in The Albert’s play was obvious too. Colts’ William Mortimer turned in a rebound after Craig Saunders saved a penalty but the Cumbernauld side found their new-look hosts tough to break down and the game finished 1-0. Signs of progress – and most importantly hope – for Hawick fans.

Edusport Academy were on their travels at Christie Gillies Park to play Civil Service Strollers in what looked to be an entertaining clash. Raffi Krissian put the Academy ahead just before half time but David Churchill pegged them back with his third of the season after 65 minutes. Thomas Garnier has enjoyed a good start to his Lowland League season though and netted his fourth of the season to give Edusport a 2-1 win.

Your humble correspondent was in attendance at The Indodrill Stadium as BSC Glasgow welcomed Gary Small’s Whitehill Welfare, so you may notice an unusual level of detail in this match.

BSC were looking to open up a 5-point gap at the top of the table (although East Kilbride weren’t in action this weekend) and Welfare were keen to build on an impressive 5-2 win at Gala Fairydean Rovers last weekend.

Welfare made five changes to that team but found themselves behind after three minutes when Martin Grehan turned in a cross from Stevie Murray. Murray scored one of his own after half an hour, a fairly soft free kick award gave the former Partick Thistle man a chance from 25 yards. His left foot strike wrong-footed Welfare keeper Billy Taylor and BSC were 2-0 ahead.

Despite the score, Whitehill were playing some impressive football and a couple of deft touches from Kyle Mitchell excited the crowd at The Indodrill. BSC were awarded another free kick inside the Welfare half on 40 minutes – another decision which angered the visiting bench – and the ball was floated into the box and found its way to Josh McArthur.

The BSC defender rose to meet it among offside calls from the defence and sent a looping header over the stranded goalkeeper. The ball was on its way in but Jack Smith made sure for the home side, knocking it over the line.

BSC managed a fourth on 73 minutes as Gary Redpath, who had spurned a few chances in the match, took the ball down just inside the Welfare half and went on a mazy run through the defence, poking home under Billy Taylor.

It was a professional performance from Stephen Swift’s BSC who set an early marker for their title rivals, but there were plenty of positives for Whitehill Welfare going forward, with Gary Small acknowledging the hard work and positivity of his side in his post-match interview.

With only East Kilbride and East Stirlingshire in league action next weekend, we’ll be taking a wee break from SLFL Roundup, but we’ll be back after Matchday 9 with all the goals and talking points.