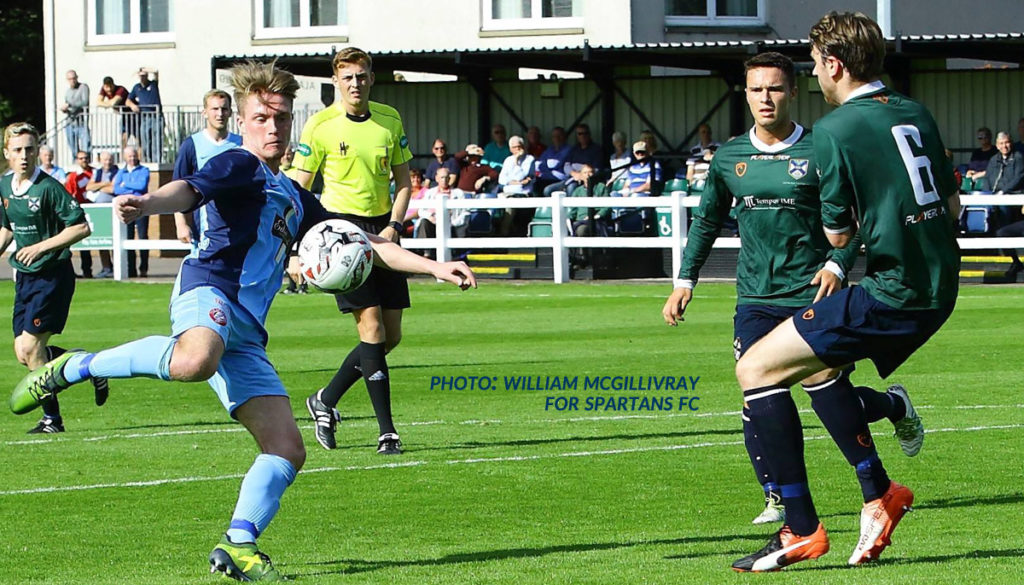 It’s SLFL Roundup time! With 42 goals scored in the Scottish Lowland Football League this matchday, it’s been a GOAL BONANZA weekend, so strap yourselves in as we take you on a whistlestop tour of all the goals.

We kicked off with a local derby on Friday night as University of Stirling extended their hospitality to East Stirlingshire. The Shire have had a mixed start to the season, with only two wins so far for last season’s top scorers. John Sludden’s side went into the match looking to take the points against a Uni side who are riding high under marksman turned marksman/manager Chris Geddes.

The home side struck twice in the first half before Andy Rodgers pulled one back for Shire to set up a tasty last half hour, but Jordan Tapping received his marching orders for a second yellow card on 68 minutes which took the sting out of East Stirlingshire’s resurgence. Substitute Kieron Hall made it 3-1 to University of Stirling, keeping them in third place after an impressive start to the season.

Civil Service Strollers have had a steady start to the SLFL season and Dalbeattie Star made their way to Christie Gillies Park looking to get back to winning ways. It wasn’t to be for Dalbeattie’s finest as Stephen Froude hit a hat trick and Jack Downie made it 4. Star were unable to add to Scott Milligan’s first half goal. Final score: 4-1.

Cumbernauld Colts have had a changeable start to this SLFL season. Three wins at the start of the season followed by two draws and two defeats left Colts in 7th going into the weekend. Vale of Leithen, coming off two wins and five defeats in the first part of their season, were looking for an away win at Broadwood.

It proved a case of ‘what might have been’ for Vale’s fans as after Jason Stevens put them into the lead in the 8th minute. Colts regrouped and stampeded forward, Liam McCrory and Craig Holmes had overturned the deficit within ten minutes of Vale’s goal and there was no corralling the Colts from there. Stephen Kerr, Craig Murray and Sean Brown (2) got in on the action as the Cumbernauld side ran out 6-1 winners.

Edinburgh University played host to The Spartans at Peffermill as Dorian Ogunro’s side looked to put a tough start to the season behind them and Spartans’ boss Douglas Samuel looked to get their title challenge back on track after a week off for cup business. Ross Allum was the match winner for Spartans as his two goals cancelled out one from Luke Murray to give them all three points.

David Banjo and Phil Addison were the heroes for Selkirk yet again as they defeated Edusport Academy 2-0 away at Galabank, putting Ian Fergus’ charges 5th in the table.

Galashiels was the venue for a former Selkirk player this weekend as Gary Nicholson’s new side Whitehill Welfare travelled to take on Gala Fairydean Rovers.

It’s been a mixed bag so far for Gala but a disappointing derby defeat to Selkirk last week didn’t seem to affect them as Lewis Swaney put The Fairydean ahead inside five minutes. Unfortunately for them, goals from William Kidd and a stunning five minute hat trick for Jack Wright exploited a number of errors in the Rovers backline to send them in 4-1 down at the break. George Windram pulled one back in the 60th minute but Gary Nicholson, replacing Mark Smith from the bench, sealed an impressive 5-2 victory for Welfare.

East Kilbride went into the weekend looking to close the two point gap between them and BSC Glasgow at the top of the table. They travelled to Raydale Park to take on a Gretna 2008 side buoyed by three wins in a row. The Champions were too strong for The Black and Whites though. Adam Strachan got things off to a flyer with a goal inside ten minutes before Daniel Wadge converted a penalty to even things up.

There was a sense of intrigue at Albert Park as new Hawick Royal Albert manager Craig Tully took his place in the home dugout. The Albert have struggled this season, going into the weekend having conceded 35 goals in just seven games. BSC Glasgow were the visitors, looking to cement their pre-season shout as title dark horses.

Tully got a glimpse of the task ahead as BSC roared into action, putting themselves three goals up inside 20 minutes. Jack Smith then netted two in two minutes to make it five, before Ross McMillan netted his first goal for BSC and Martin Grehan completed his hat trick on 41 minutes to make it 7-0 to BSC going into the half time break. Robbie Duncan scored on the other side of half time before Martin Grehan converted his hat trick into a haul on 57 minutes. The final score, 9-0, will be concerning to Albert fans who are still seeking their first league win of the season.

With all that tied up, we look forward to a half matchday next Saturday as some SLFL teams are in South of Scotland Challenge Cup action. Here’s the all-important league table…

And, for those of you that haven’t been keeping a tally throughout this GOAL BONANZA edition of the SLFL Roundup, here’s the top goalscorers list…