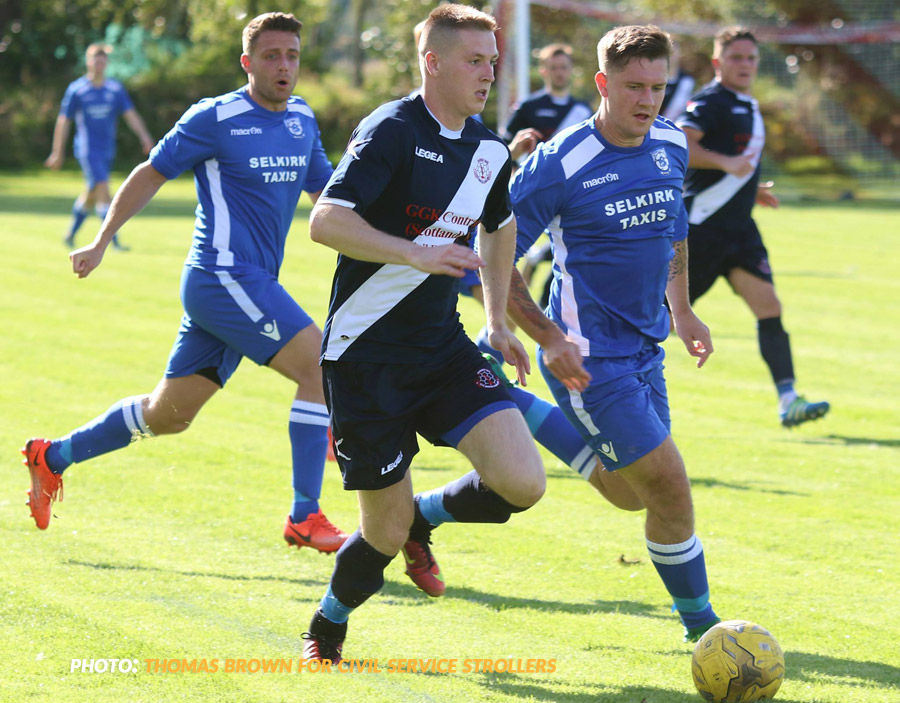 It’s been a couple of weeks since we saw your distinguished, handsome faces on the SLFL Roundup due to a wee technical hitch last week. That means that not only do we have the SLFL’s Matchdays Six and Seven to cover, we’ve also got half of Matchday Five. Strap in!

After a midweek half round of fixtures which saw a good win for Gretna 2008 over Vale of Leithen and draws in the games between Edinburgh University and Civil Service Strollers, and University of Stirling and Whitehill Welfare, the league table was beginning to take shape as we hurtled inexorably toward Matchday 6 in the Scottish Lowland Football League. Speed-round-up!

Undoubtedly the highlight of last weekend’s round took place at Christie Gillies Park on Saturday afternoon where Civil Service Strollers, fresh from a draw with Edinburgh University on Wednesday night, welcomed Selkirk whose midweek match had been postponed. It was end-to-end throughout the match and an even game got off to a lightning start when Civil’s Kyle Fee turned into his own net in the first ten minutes.

Strollers equalised through trialist Kris Mitchell just after half time before Dale Baxter pushed Selkirk back into the lead. That man Mitchell was at the double to make it 2-2 with just ten minutes left but David Banjo popped up for Selkirk with a minute to go to send the Souters back to Yarrow Park with all three points. Ding dong.

It’s been an even start to the Lowland League season and that was borne out at Broadwood on Friday evening where Cumbernauld Colts said ‘hiya pals!’ to The Spartans. David Greenhill opened the scoring for the Ainslie Park men but a goal in the dying seconds from Stephen O’Neill gave Colts a share of the spoils and dented Spartans’ sprint to the summit of the SLFL.

Two sides very much gunning for that all-important top spot were BSC Glasgow and East Kilbride who took on Edusport Academy and  Gala Fairydean Rovers respectively.  Two tight games resulted in three points each for BSC and Kilby, the former winning a tight game 1-0 at The Indodrill and the latter came roaring back in the last 20 minutes after being a goal down, coming away from Netherdale with a 2-1 win.

Bookend goals from Steven Degnan and Farrel O’Sullivan were enough to give Dalbeattie Star three points at Islecroft against Edinburgh University and two second half goals from Paul Sludden and Kevin Kelbie gave East Stiringshire a 2-0 win at Victoria Park against Vale of Leithen.

University of Stirling have enjoyed an impressive start to the season under goal machine player/manager Chris Geddes and he was on the scoresheet again as the Uni travelled to Albert Park to take on struggling Hawick Royal Albert. The home side battled away against the scholars but went down 1-4 but the performance itself will have given their fans hope.

James Flynn fired Whitehill Welfare into the lead against Gretna 2008 on 13 minutes at Ferguson Park and Welfare fans could have been forgiven for thinking that they might be looking at their second win of the season. Andy Aitken and Davie Irons’ side had other ideas though and regrouped. Jake Smith and Kevin Connelly hit Welfare with a quickfire sucker-punch before half time and Connelly got his second just before the whistle, sending Gretna in 3-1 up. 2008 hit another 3 in the second half, with Stuart Gray bagging one, Connelly got his hat trick and Smith hit a brace. The match finished 6-1 to Gretna.

Still with us? All of that white hot action on Matchday Six had made things very tasty at the top of the SLFL. A mere three points separated the top four and The Spartans were hoping for a few good results to give them impetus – their match with East Stirlingshire was postponed ahead of their Irn-Bru Cup tie with Linfield.

University of Stirling started the day in 4th and were looking to clip the heels of leaders East Kilbride when they visited K Park. The scholars have developed a habit of scoring early in games and this match was no exception. Paul McCafferty put them ahead inside ten minutes before Sean Winter equalised for Billy Stark’s side. By half time it looked like the game could explode into action in the second half but 1-1 was the final score.

All eyes then were on Islecroft where BSC Glasgow took on Dalbeattie Star. Two goals in the opening ten minutes put BSC in control of the match but Stephen Swift’s side would have learned lessons from last season when Star took two 3-2 victories. BSC went 3-0 ahead just after half time but Star roared back into the match with a goal from Scott Milligan before Jack Smith restored BSC’s three goal advantage. Farrel O’Sullivan scored another goal for Dalbeattie Star to make it a nervous finish but BSC emerged 4-2 winners.

Gala Fairydean Rovers made the short jaunt down the A7 to take on rivals Selkirk at Yarrow Park. Unfortunately for the travelling support, Rovers weren’t at the races and Ian Fergus’ side put four past GFR without reply and George Windram saw red for Steven Noble’s men. Daryl Healy scored two, Dale Baxter and Ciaren Chalmers completed the scoring.

Gretna 2008 built on an impressive victory at Whitehill Welfare last week, beating Edinburgh University 1-0 at Raydale Park with another goal from Stuart Gray. Edusport Academy welcomed Cumbernauld Colts to Galabank. Grant Nelson and Sofiane Zeghdane scored either side of Colts’ Andrew Selkirk to give Edusport a 2-1 win.

Civil Service Strollers took on Whitehill Welfare at Ferguson Park and it was the North Edinburgh men who took home the three points with a 2-1 away win.  Hawick Royal Albert were on the road at Vale of Leithen where Chris Anderson’s men picked up their second win of the SLFL season, running out 2-0 winners at home.

A note of congratulations to The Spartans who fought valiantly against Northern Ireland’s Linfield in the second round of the Irn-Bru Cup on Saturday but went out after a close-run 2-1 loss.

A bumper SLFL Roundup ends, in the traditional way, with a look at that all-important league table…