In the first of a regular series, our very own Lowland League virgin Alistair Wollaston gives his impression of the grounds and games as a first timer, and where better to start off than at the home of the Lowland League champions, The Spartans.

“You can fair feel the draught up here, eh?” says an elderly fan as he passes me. It’s more of a statement than a question. 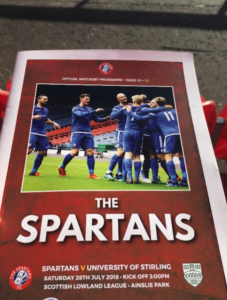 He’s not wrong; my backside – pressed against the back wall of Ainslie Park’s solitary stand – feels like it might fall off at any moment. The rain, which had been lightly drumming on the roof of the stand prior to the match’s 19:30 kick-off, is now laying siege to both the fans and the players, who trudge out from the safety of the dressing rooms to start the second half.

For my first ever Lowland League game I’ve made a grave error: trusting the Scottish summer. As I made my way toward Ainslie Park – a small but modern facility hidden just off Ferry Road in Edinburgh – it had been a blustery but not unpleasant evening.

As kick off approached however, clouds began to blow overhead, and the rain began to fall; as the teams emerged it became a downpour, with the wind howling in from the pragmatically named Café End of Ainslie Park making conditions difficult throughout the opening period.

The first half was a cagey affair, with both teams looking well organised at the back and attacking play dampened, quite literally, by the weather. Cross-field diagonal passes – particularly towards the Café End which Spartans were attacking – had been something of a gamble, with balls from the visitors’ left towards the right wing often heading further back towards goalkeeper Blair Carswell than towards their intended target.

In a first half of few chances, Spartans – the incumbent Lowland League champions – had come closest to taking the lead. Forward Jack Smith, last season’s Lowland League top scorer while playing for BSC, found space in the box after good work from left back Gary Cennerazzo, but slammed his shot straight at the Stirling Uni ‘keeper John Allan from close range. 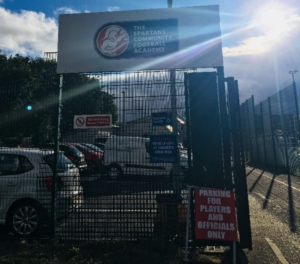 Smith was one of the players I found myself watching most keenly throughout the opening 45. Despite a subdued first half, I had been impressed by the intelligence in the striker’s play, positioning his body cleverly and allowing the ball to do most of the work in creating an extra yard of space. In nearly 20 years of watching my own team, Livingston, play at every level of the SPFL, it’s incredible how many strikers I’ve seen lack this seemingly basic skill.

The first half had been punctuated by few other moments of interest: Spartans’ centre back Adam Corbett had set a new world record for shouting the word ‘squeeze’ in a five-minute period (alas, nobody from Guinness was present to verify this); a delightful dipping cross from Stirling Uni’s Thomas Cowley had been headed just wide; and I’d had to move seats due to my view being blocked by the scout from Edinburgh University AFC (Spartans’ next opponent) taking videos of the match on his phone.

The rain shows little sign of abating as the second half kicks off, but the quality of the match does improve. Cennerazzo continues to please the home support – who have turned out in good numbers despite the weather – with his work rate down the left, but Spartans continue to struggle to create clear-cut chances against a disciplined Stirling Uni back line.

The visitors continue to soak up the hosts’ pressure, before delivering a terrific sucker punch in the 54th minute. After the students win a free kick outside the Spartans’ area, full back Dominic Slattery curls a brilliant strike past beyond the reach of Carswell and into the top corner. It’s possible that the wind plays its part, but I’m willing to give the Stirling Uni defender the benefit of the doubt.

Jamie Dishington comes close to levelling the game for Spartans shortly after, but moments later Stirling Uni deliver what could be the knockout blow: intercepting a poor pass in midfield and breaking at speed, with Lewis Hunter eventually firing home to double the students’ advantage against a defence that conceded only 17 goals in the whole of last season. A few of the Spartans’ faithful, probably equally as concerned by the welfare of their frozen posteriors as by the score, take this as a cue to head for home.

The defending champions aren’t done yet though. The introduction of the powerful Harry Girdwood presents the Stirling Uni centre backs with a different kind of problem to solve, and – despite pressure from two defenders – the forward wins a flick-on at halfway that sends Smith clean through to poke a shot under Allan and reduce the deficit with ten minutes to play.

Three minutes later, after a chaotic goalmouth stramash following a Spartans’ corner is somehow cleared by the visitors, I begin to think that Stirling Uni might still get out this with a very credible victory. The Ainslie Park stadium announcer seems to agree with me, and does a passable impression of Marvin the Paranoid Android while informing the crowd of a Stirling substitution.

He needn’t have worried, as moments later Cennerazzo snatches a point for the hosts with a glorious equaliser, cutting in from the left and curling a belter of a strike past Allan and into the far corner. It’s a fitting end to a match that came to life in the second half and that’s quality and entertainment value far exceeded the £7 entry fee, and I’ve learned a lesson that (I hope) the other 15 Lowland League teams are already well aware of: don’t count out the champions.

Despite my complaints about the weather, I’ve thoroughly enjoyed my first Lowland League experience. The gap in ability between the Lowland League and the lower reaches of the SPFL is considerably less than I’d anticipated, and I can think of a few games I’ve paid more than twice the admission price to watch a poorer product.

Look out for more tales from Alistair in the coming weeks of the season and follow him on Twitter: @gaunawol.