To say we at the Roundup were excited about the big kick off in the Lowland League would be a slight understatement. At one point, the room in which we were locked over the close-season was so buzzing that the door hinges almost gave way, giving us a glimpse of the promise of the outside world.

Thankfully football’s back, and with it, the Lowland League Roundup! Let’s get to it…

For many Lowland League supporters this was the first glimpse of new boys Kelty Hearts, the team who brushed aside all in their path on the way to the East of Scotland league title last season. Thomas Courts’ men welcomed Dalbeattie Star who had impressed in pre-season.

Kelty lined up with Errol Douglas, a forward who scored 25 goals last season, in the heart of defence. It was the Maroon Machine who opened the scoring on 20 minutes when new signing Mathew Gay rose to meet Stephen Husband’s cross.

Dean Brotherston levelled the scores for Dalbeattie before half time and Lewis Sloan put Star into the lead with a stunning free kick (video below) around the 70 minute mark.

Just 14 minutes later a foul on Stuart Cargill (I think?) saw Kelty Hearts win a free kick on the edge of the Dalbeattie box and Scott-Taylor McKenzie fancied a bit of that stunning free kick action and dispatched a kick that left the Star ‘keeper rooted.

An entertaining match to mark the start of the new season and a new side in the league and both sides will have gone home happy with the point.

It was honours even at Christie Gillies Park in a match where the pre-match monsoon was the main talking point. Thankfully for the 79 attendees in North Edinburgh, the sun eventually came out and a much reinforced Vale of Leithen side did their best to test the home side.

A point apiece for both sides as they find their feet, Vale with a raft of new signings to bed in and Civil Service finally transitioning into life under their new manager Gary Jardine. 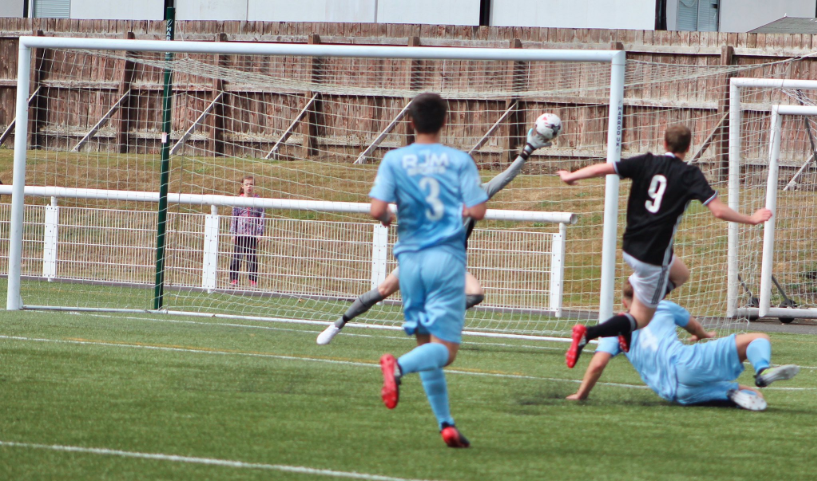 Colts returned to the scene of their Lowland League Cup triumph looking to take three points away from their opening Lowland League fixture against Dean Shanks’ Gala Fairydean Rovers. It didn’t take long to find a goal either as new signing Fraser Team took advantage of good hold up play from last season’s top scorer Sean Brown to put Colts 1-0 up.

It stayed that way until 68 minutes when Darren Smith converted a chance to make it 1-1. Unfortunately it wasn’t going to be Gala’s day as Colts restored their lead within two minutes as Scott Davidson put the ball past Gregor Amos, one of four former Selkirk players making their debuts for Rovers, to make it 2-1.

On-loan Livingston ‘keeper Jordan Pettigrew secured the points for Cumbernauld Colts, making a match-winning save from Josh Morris in the closing exchanges.

Raydale Park played host to Edinburgh University on the opening day and it was the students – who many had predicted to struggle in the opening few games – racing into the lead on 10 minutes when Stu McNicholas converted his chance. Double the time, double the lead, as McNicholas popped up again to make it 2-0 on 20 minutes.

Abdul Yusuf completed the win with a well struck penalty on 60 minutes.

East Kilbride TV produced a 90 second highlights package for this match and you wonder how they managed to fit it all in (you can see it below). An opening day demolition was the order of business against a depleted Selkirk side whose goalkeeper Matthew Mackie was to endure a torrid afternoon.

Selkirk’s fate was all-but sealed in the opening minutes when Anton Brady crossed in toward new Kilby captain Craig Malcolm. His header was judged by the referee to be going wide but thankfully for him Selkirk’s Ludovic Erhard, formerly of Hawick Royal Albert, was in the way to guide it into the net.

Due to the restrictions of the word count, I won’t summarise every goal – I’ll stop at two – but Liam Craig’s cross-come-shot on 15 minutes was parried out by ‘keeper Mackie directly into the path of Malcolm before trying in vain to block the Kilby striker’s shot.

The 10-0 win for Kilby is a record opening day victory in the Lowland League and matches the highest winning margin set last season by… err… Selkirk against Hawick Royal Albert. There’s much for new Souters manager Terry Ferguson to consider ahead of their home match against Gretna 2008 on Wednesday.

Jean Guy Lucas opened the scoring at Galabank, the beneficiary of a lovely weighted pass from Mark McKenna, which allowed him to slot the ball under Welfare’s Ross Jardine. McKenna was creator again in the 19th minute as his cross found Edusport’s trialist striker to beat Jardine with a half volley just inside the six yard box.

Liam Coogans’ first goal of the season came about thanks to some excellent build up. David Sinclair threaded an excellent pass through the Whitehill defence, allowing the Edusport number 10 to finish with aplomb, sending the hosts in 3-0 up at half time.

Whitehill Welfare were brighter in the second half and pulled one back through substitute Kyle Mitchell, the attacker scoring from a seemingly impossible angle past Solal Pelmard-Bassi following good interplay with trialist Liam McIntosh.

Edusport wrapped up the three points in the 74th minute though as their trialist striker raced through, forcing a good save from Ross Jardine whose parry hit the unfortunate Craig Reid who was forced to watch the ball trickle into his own goal.

The Spartans 2 – 2 University of Stirling

The evening game on Saturday was at Ainslie Park where Lowland League champions The Spartans welcomed Chris Geddes’ University of Stirling side. The conditions were distinctly unsummery in North Edinburgh as the early exchanges were punctuated by high winds and driving rain.

The first half ended in stalemate as neither side could overcome the conditions to put the ball in the net, but on 54 minutes Uni won a free kick. Right back Dominic Slattery stepped up and promptly put his side ahead, his free kick sneaking inside Blair Carswell’s post.

Lewis Hunter put the students further ahead in the 70th minute after the ball broke to him in midfield. He burst forward and slid the ball home, prompting wild celebrations among the men in green. New Spartan Jack Smith pulled one back for the home side on 80 minutes, getting in behind the Uni defence to slide home.

Then Gary Cennerazzo did this…

The game finished 2-2, thanks to that absolute peach of a strike.

Notable by their absence are last season’s third and fourth placed sides, who competed in the Irn-Bru Cup Preliminary Round on Sunday. East Stirlingshire ran out 1-0 winners thanks to an own goal from BSC’s John Tennent and will play Motherwell U20s in the next round.

So that’s your lot for this week! We’ll be back next Monday for a roundup of the midweek games and this coming weekend, so keep your eyes peeled and be sure to tweet us your stories from the weekend just gone to @OfficialSLFL.