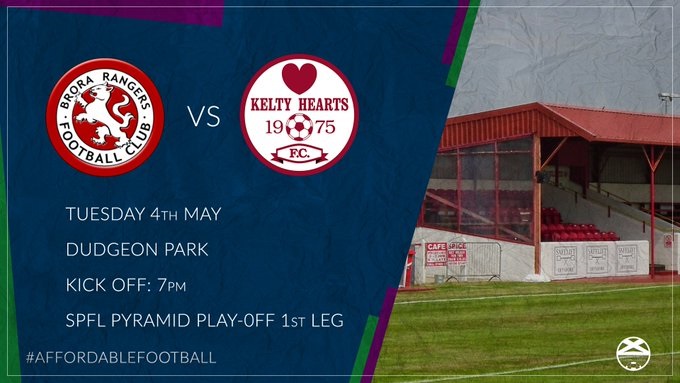 Brora Rangers and Kelty Hearts will finally meet in the first leg of the Pyramid Play Off this evening as the Scottish Highland League champions welcome the Scottish Lowland League winners to Dudgeon Park.

A match that has already had so many sub plots before a ball has even been kicked, it would rival an episode of Line of Duty is available to watch via Brora Rangers PPV with kick off at 7 o’clock.

Both sides were declared champions of their respective leagues a couple of months ago but have had to wait to find out if the play offs would take place with confirmation coming through last week.

Kelty head north having not kicked a ball competitively in 2021 but will be optimistic of their chances of getting a good result to take back to New Central Park for the second leg on Saturday.

Kelty only lost one league game in the 2020-21 season and had won eight of their last ten games in all competitions before the season was abruptly halted.

Last year’s top scorer Nathan Austin had scored eight goals in those ten games and will be one of many potential goalscorers for both sides on show. Austin also netted for East Fife during a short term loan in March.

Brora may have only played three league games this season but they also know where the goal is with 20 goals scored in those three matches.

Bjorn Wagenaar scored a hat-trick in their last league match against Fort William while Jordan MacRae and Martin McLean were the men that made the headlines when they scored to knock out Championship side Heart of Midlothian in the Scottish Cup.

Both sides featured in the Betfred Cup at the start of the season with Brora losing two games on penalties while Kelty Hearts beat Brechin City along with narrow defeats to Dundee United and eventual winners, St Johnstone.

In a weird twist of fate, both sides last games were against Stranraer in the Scottish Cup.

The prize on offer is a two legged affair with Brechin City for a place in the SPFL next season.

You can watch the match via PPV here: https://brorarangers.cleeng.com/buy-now-brora-rangers-vs-kelty-hearts-4-may-2021/E844313776_GB?fbclid=IwAR1OKWIzRs7O4ls9suY2eCF8eS2J3EvmnTFowxcFEBztQtVH7f–hQUeSZ8