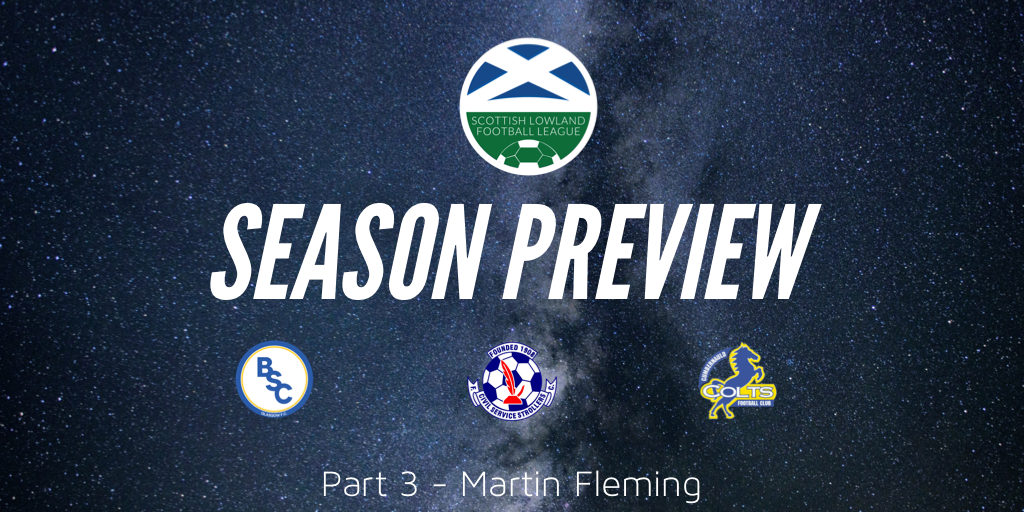 We’re onto part three of our season preview. This time, Martin Fleming checks how BSC Glasgow, Civil Service Strollers and Cumbernauld Colts have been operating during the off-season.

BSC Glasgow will surely start the season with more confidence than last given that, not only did they finish runners-up and win the Lowland League Cup, they also finished the top scorers and have managed to hold on to the majority of the squad that were so crucial in last year’s victories.

The hardest departures to take for Stephen Swift’s side were already expected as the key players who headed for the exit door were loanees; Ben Quigley has recently signed for Stirling Uni, last season’s Young Player of the Year, Carlo Pignatiello has signed on loan with Stranraer, Euan O’Reilly has headed to Airdrieonians on loan and Cammy Ballantyne is back with St Johnstone.

However, BSC have more than made up for their losses signing three new players who all played in the Lowland League last season; Michael Anderson joins from East Kilbride after spending his youth career at K-Park plying his trade as a midfielder, Ricky Miller joins the defensive ranks after spending last season at Gala Fairydean Rovers, and finally Simon White joins from East Stirlingshire after the midfielder won the side’s Young Player of the Year award last season.

The changes are also coming off the pitch for BSC as two important members of the coaching staff in Michael Moore and Richie Salveta decided to leave the club. Replacing them will be Frazer Wright, a former assistant manager at Stirling Albion as well as a former Stranraer, Kilmarnock and St Johnstone player as well as current skipper Ross McMillan who will be taking on a player/coach role for the season ahead.

Thanks to keeping the side that have already tasted victory, BSC Glasgow will surely hope to at least emulate last year’s success and take the fight to the title. Their first match is a home tie against East Stirlingshire.

The 22-year-old may have only joined the squad in March but quickly proved how much of a benefit he was to the squad especially in their Lowland League Cup campaign. The former Beith Juniors man may play up-front but fights for the ball in every area and can cover every blade of grass over the 90 minutes.

After a solid 5th place finish last season, the Edinburgh side will be out to prove once again, they are not to be taken lightly.

A flurry of new players have come into Christie Gillies Park as Gary Jardine looks to showcase a revamped and refreshed squad in the opening games; the duo of Callum Yeats and Jack Hodge arrive on loan making the short trip over from Hibernian.  Striker, Josh Morris joins from Hill of Beath, Jack Blaikie has arrived after spending his last two seasons at Vale of Leithen, Scott Main signs from Gala Fairydean Rovers, Chris McKee from East Stirlingshire and finally Cammy Muirhead signs from Cowdenbeath after spending a six-month loan with Civil last season.

However, the sting will still be fresh after the club lost two of their talisman from last season. Steven Froude left for Whitehill Welfare while their top scorer from last season, Jordan Hopkinson departed for Tynecastle.

Their pre-season results have looked nothing but positive and have seemingly proven this new squad will be tough to break down with a 4-0 win over a young Dunfermline Athletic team, 4-1 over Broxburn Athletic and a 5-0 victory over Arniston Rangers.

The atmosphere surrounding the club will be at an all-time high, especially with the side in the process on getting floodlights at Christie Gillies Park.

Their first fixture is away to Gretna 2008.

Despite only having a short 6-month stint at Civil Service Strollers before, his performances proved he was adept in the Lowland League. With six goals in that stint and experience from Cowdenbeath, he will surely be a forward to watch out for.

After a respectable finish in 7th place last season, the Broadwood men will look to once again take a fight to the top six and improve on their performance last year.

Colts have managed to keep hold of a fair majority of their team from last season while successfully adding a good few from around the Lowland League and beyond; Marty Wright joins upfront after signing from Bo’ness, Lewis Bonnar comes in from Stirling Uni along with Michael McAnespie at the back, meanwhile goalkeeper Jonathan Grier joins from Harthill Royal and midfielder Lewis Warnock signs up from East Kilbride.

Pre-season hasn’t been the kindest to the side having lost to Buckie Thistle, Rutherglen Glencairn, Queens Park and Irvine Meadow. Their only victory came over Rossvale Juniors. However, it is only preseason and with the squad Colts have at their disposable, it’s hard to envision anything less than a top 8 finish.

Their first game is an away trip to Galashiels as they take on Gala Fairydean Rovers.

A crucial piece of the puzzle for Colts last season, he will link up extremely well with new strikers, Lewis Bonnar and Marty Wright and create an experienced front line likely to intimidate many defenders across the league.