‘You’ve shown your true colours, ref!’ one of the away fans shouts from the sideline. East Stirlingshire forward Andy Rodgers shares this view. He springs from the ground into a crouch and straightens up, directing a verbal barrage at the official throughout.

I’d arrived at Christie Gillies Park moments earlier. Around 20 minutes of the match have already passed.

I’m not usually this tardy. My bus across Edinburgh had been delayed by the pro-independence rally taking place in the city centre.

I’ve always respected those prepared to take to the streets in support of their beliefs, but as my bus tiptoed through the sea of saltires occupying the Royal Mile, the delay made me resent every one of them.

It’s a gorgeous afternoon in Edinburgh though, and my bitterness didn’t last long. 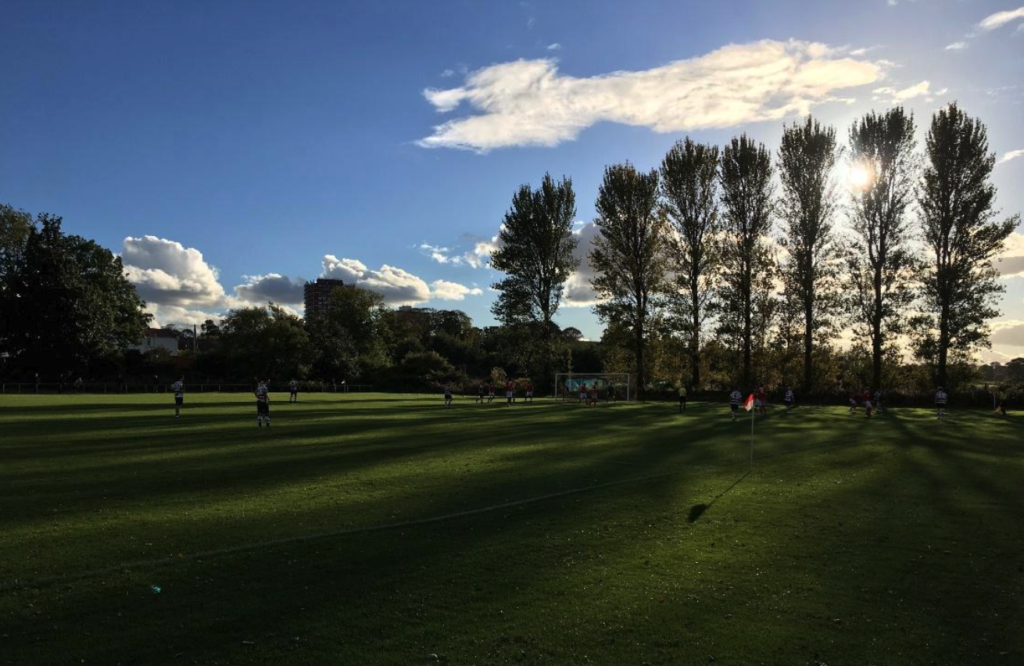 Hidden behind World of Football on Marine Drive and overshadowed by trees on two sides, Civil Service Strollers’ home is instantly one of my favourite grounds.

Travelling East Stirlingshire supporters appear to outnumber the home fans. They’re spaced out in small to medium-sized groups around the fence surrounding the pitch and creating most of the noise. The score remains goalless as I find a spot near halfway to watch the match, and a succession of hard tackles by Civil Service Strollers’ midfield is riling the away support.

Among the Lowland League title favourites at the beginning of the season, East Stirlingshire are in a bit of a rut. The away side haven’t won in six league games dating back to August, and have dropped to 13th in the table going into today’s game.

Three wins out of four in August saw Civil Service Strollers rise to the top end of the Lowland League table, but the home side have also struggled recently. Successive defeats to BSC Glasgow and Kelty Hearts have seen the North Edinburgh side drop back towards mid table, but within the first few minutes of my arrival it’s easy to see why Civil have exceeded expectations so far this season. The home side is a coordinated unit. Striker Steven Froude works hard to press Shire high up the park, and the back three deals well with high balls while also posing a threat from set pieces.

Despite this, East Stirlingshire take the lead with the first real moment of quality since my arrival. Graeme MacGregor escapes the defence down the right before cutting the ball back across goal for Ross Allum to finish at the far post.

After joining from Spartans in the summer, Allum has quickly found his feet as the focal point of Shire’s attack – scoring seven goals in nine Lowland League games before the start of play.

The goal increases the urgency in Civil Service Strollers’ play as we approach the end of the half. A succession of direct passes bombard the East Stirlingshire box, but the away side are aggressive in defence, winning their share of headers and pressurising the Civil Service forwards on the ground.

Just as it appears that Shire will make it into the interval unscathed, the momentum of the match swings in a matter of moments.

From a Civil Service Strollers corner, defender Shaun Turnbull beats the defence in the air and powers a header past Jamie Barclay in the away goal. Almost immediately after play resumes, East Stirlingshire get caught high up the pitch and a great through-ball sends striker Cammy Muirhead in on goal. He slots it past Barclay and the home side are 2-1 ahead as the ref signals for half time. 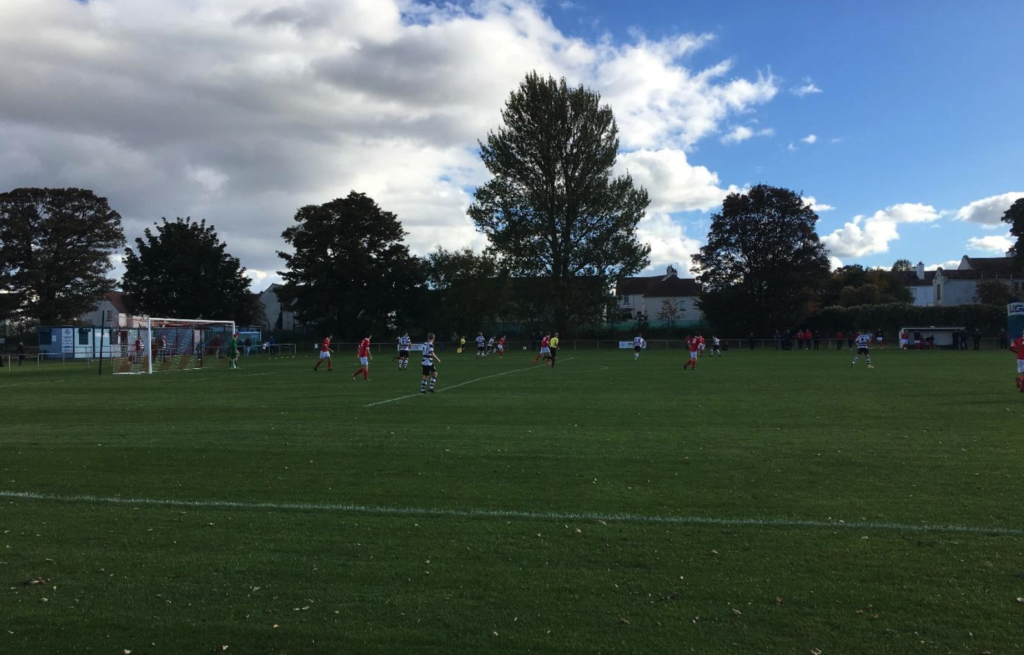 The second half begins as frantically as the first ended. The visitors are struggling to create clear-cut chances against a Strollers’ defence that has regained its shape since conceding the opening goal.

The ball breaks to East Stirlingshire midfielder Simon White with space to shoot. As he winds up for the release, a passing ice-cream van (piloted by one of Strollers’ coaching staff, I imagine) hits the disco button, piercing the Pilton air with a riotous rendition of ‘Teddy Bears’ Picnic’. Frankly I’m surprised the shot isn’t wider. Nothing is going Shire’s way.

Civil Service Strollers nearly increase their lead shortly afterwards. Muirhead receives the ball and fires wide after some good hold-up play by Froude. The visitors’ frustrations are growing on and off the pitch, with the referee taking an inventive and unrepeatable volley of insults from a particularly vocal section of the away support.

Spurred on by the passion and offensive creativity occurring off the pitch, East Stirlingshire equalise. Centre back Danny Ashe rises to meet a corner and his goal-bound header is helped on its way by Allum, who nets his second goal on his 30th birthday.

Keen to ruin Allum’s big weekend, Strollers’ retake the lead straight from the kick-off. Shire centre back Chris McKee mistimes a tackle as the home side break into the box, and Muirhead keeps his cool and converts the penalty to make it 3-2.

The ice-cream van makes another taunting circuit of the nearby housing estate.

Despite the penalty decision being clear cut, some of the away side’s frustrations with the officials are starting to boil over. Rodgers, who in fairness has been the victim of number of robust tackles, seems particularly irate.

This frustration appears to have seeped into their play. Despite over 15 minutes still being on the clock, Shire become direct in their approach, but balls from deep aimed at Allum and Rodgers are routinely dealt with by the Civil Service Strollers’ back three.

An incredibly watchable game is almost put to bed as Strollers’ captain Mark MacConnell gets in behind the away defence, but his shot on the stretch is well saved by East Stirlingshire ‘keeper Barclay.

It’s a costly miss, as shortly after the ruthless Allum completes his hat trick and levels the game at 3-3.

A ball into the Strollers’ box from the right results in uncharacteristic chaos in the defence. It somehow finds its way to the magnetic striker – who has now scored 10 goals in 10 Lowland League games this season – at the far post to finish.

Every game I’ve seen in the Lowland League so far this season has ended in a draw, but both sides seem determined to break that streak.

Civil Service Strollers respond by sending on the giant Aleau Faye. The midfielder is so tall that he draws an audible gasp from an East Stirlingshire fan near me as he enters the game. They’re almost instantly rewarded, as Faye’s mere presence in the box from a corner causes the sort of stramash usually only seen towards the end of ceilidhs, and almost results in the corner going straight in at the back post.

As the final whistle nears, the game is becoming increasingly end to end, and it’s the visitors who land the final blow. With space opening up all over the pitch, Rodgers* finds space on the right and swings in a cross that’s headed into his own net by a Strollers’ defender.

*I’ve seen several media reports which have attributed the cross to McCafferty, but I could have sworn it was Rodgers. Rest assured, a grovelling apology will follow if I’m wrong.

The goal sparks understandably raucous celebrations among the East Stirlingshire players, staff, and fans. Somewhat in keeping with the tone of the afternoon, one supporter even manages to snap out of his celebratory trance long enough to casually insult the referee as he passes by. I can’t help but be happy for Shire’s travelling faithful, who’ve played a huge role in contributing to an enjoyable afternoon.

It’s a heart-breaking end to the game for the hosts, who have played their part in easily the most enjoyable 70 minutes of football I’ve watched in any league this season.

There’s a lot of room for optimism for Civil Service Strollers, who played well throughout and won’t come up against a striker of Allum’s calibre every week.

Next time on ‘Tales of a Lowland League Virgin’, I’ll be rounding off my world tour of the EH Postcode stadiums with a trip to Rosewell to see Whitehill Welfare.