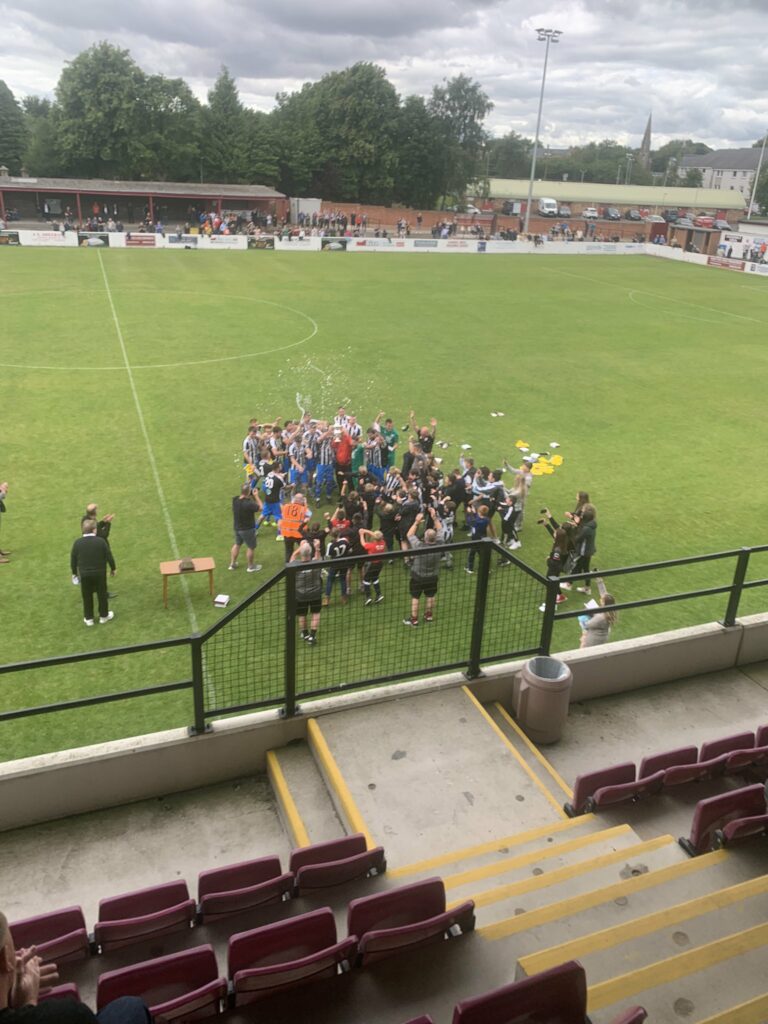 East of Scotland Conference A side Dunipace were crowned 2019/20 South Challenge Cup winners on Sunday afternoon in a thrilling 3-1 win over Lowland League Broomhill at a packed Prestonfield in Linlithgow.

Dunipace started strongly with a squad featuring a whole host of former Lowland League talent, with the former East Stirlingshire stars Andy and David Grant featuring together, while ex-Shire and Kelty Hearts defender Danny Ashe captained the Dunipace side. Marty Wright, who scored 13 goals for Cumbernauld Colts during the curtailed 2019/20 season, also featured as a striker for the East of Scotland Conference side.

Jordan Herron, who had signed for Bo’ness United this summer before abruptly leaving for Dunipace, opened the scoring after racing through on goal past two Broomhill defenders and slotted calmly under Stephen Barr in the Broomhill goals to put the East of Scotland side 1-0 up after only four minutes played.

Marty Wright was somewhat of a troublemaker for the Alloa-based side who at times seemed incapable of stopping him, and he showed his class to tee up David Morrison who flicked the ball home at the front post to double the Dunipace lead.

Dunipace could’ve and probably should’ve had another goal, after Marty Wright had again caused some problems down the right side, and his enticing cross was just out of reach for David Grant’s outstretched leg to tap over the line.

Young winger Finlay Gray looked like the real dangerman in the Broomhill attack, and his efforts paid dividends when he managed to find Scott Cusick with a great cross, allowing Cusick to finish perfectly into the bottom corner past a helpless David Kane in the Dunipace goal.

Broomhill seemed inspired after notching a goal back and went into halftime looking more confident than their counterparts.

That confidence spilled over into the second half too, with Broomhill flying out the traps and looking dangerous with each attack.

Dunipace keeper David Kane was called upon more and more but dealt with everything Broomhill threw his way. An expert reaction save from Kane to deny Wednesday night’s Challenge Cup hero Ross Alexander after some nice play from the towering Sean Slaven was enough to preserve his sides lead in the tie.

Unfortunately for Broomhill they were reduced to 10 men on the hour mark after Jack MacCalman had held back striker David Grant, with the centre back shown a straight red for denying a goalscoring opportunity.

This proved to be the end of the Lowland League side’s period of dominance in the game as they struggled to deal with the extra man at times.

Mayhem broke out in the Broomhill box around the 78th minute after David Grant had taken the ball round Stephen Barr at a wide angle, but rather than shoot, the striker unselfishly decided to tee up earlier goalscorer David Morrison who saw his shot saved by Stephen Barr. The ball spiralled in the air before a Dunipace player headed back across goal with the ball falling to David Grant again. In true David Grant fashion, the striker opted not to shoot first time, instead shimmying past two outstretched Broomhill defenders and cut in from the right-hand side, with his shot cannoning of the crossbar and going out for a goal kick.

Broomhill had one final chance on the 85th minute when a cross was floated across the goal to Derek McNab, but the former Rutherglen Glencairn striker could only send his header looping over the crossbar.

David Grant finally got his goal, and Dunipace’s third and final of the day on the 87th minute, when he found himself unmarked after a quick free-kick and managed to dribble his way into the box from the left before firing under Stephen Barr to send the travelling Dunipace support into dreamland.

A clinical performance from Dunipace proved to be the difference, as the club collected their first piece of silverware since 1999.

Broomhill return to league matters on Wednesday night when they host Berwick Rangers, while Dunipace are also back in action at Westfield on Wednesday where they welcome Kirkcaldy & Dysart.