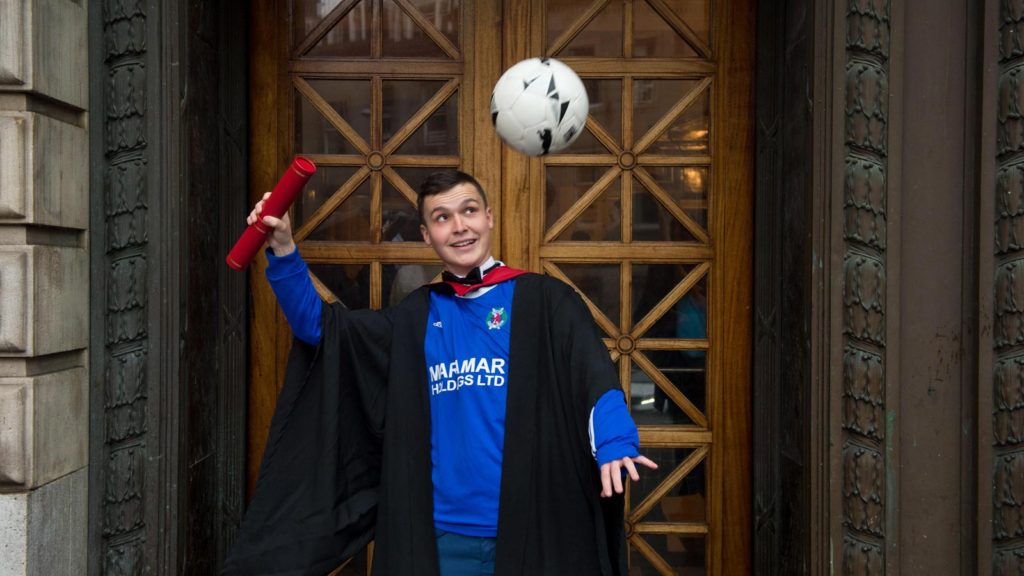 The youngest manager in Scottish football will today graduate from Edinburgh Napier University.

Kenny Aitchison has just become the youngest boss in Lowland League history by getting the top job at Hawick Royal Albert at the age of 23.

Today he will follow up his appointment – which will see him operate at the level immediately below the professional game’s League Two – by picking up his honours degree in sport and exercise science at Edinburgh’s Usher Hall.

Now he hopes to use the coaching know-how he gleaned from his two years at university to get the Borders side performing successfully on the pitch.

Kenny said: “I believe the club appointed me because of the confidence I showed at interview, but also due to the unique and innovative training methods learned from the course.

“Subjects like Analysis of Sports Performance and Practical Coaching have made me rethink the sport I have played my whole life, and my honours research project was an analysis of the goals and assists within last season’s Scottish Premiership.

“The remit for the job is to try to keep Hawick in the league, but personally I am hoping we can be the dark horses of the competition and pull off a Leicester City.”

Former Portobello High pupil Kenny, who has had spells on the staff of East Fife and Alloa Athletic, studied sports therapy at Edinburgh College before enrolling at Edinburgh Napier.

He was thrilled to find that, as well as concentrating on the physical aspects of the game, the university course expanded his coaching knowledge and allowed him to link his tactical and technical methods to wider theories about the game.

Kenny, who has just done his introduction to the UEFA A Licence, will have his work cut out at Hawick though. The club finished 14th in a 16-team league last season, and he inherits the job with few players signed up for the next campaign.

However, he said: “I felt the challenge of being a manager at this level was too exciting to turn down. I was told I was one of numerous candidates to be interviewed for the role, so, despite my young age, I obviously rubbed off well on them.

“I am now working hard on meeting and recruiting players and staff as well as developing other areas within the club.”

University staff said Kenny was a pleasure to teach as he worked his way through his BSc (Hons) Sport and Exercise Science course.

Pete Laird, Programme Leader Sport, Exercise and Health Science, said: “As one of our direct entry students, he took to the course with great enthusiasm and through his hard work and research in performance analysis and coaching, he has given himself all the tools to succeed in modern football.

“We will all now be watching for Hawick’s results on a Saturday, and wish him all the best in his career.”