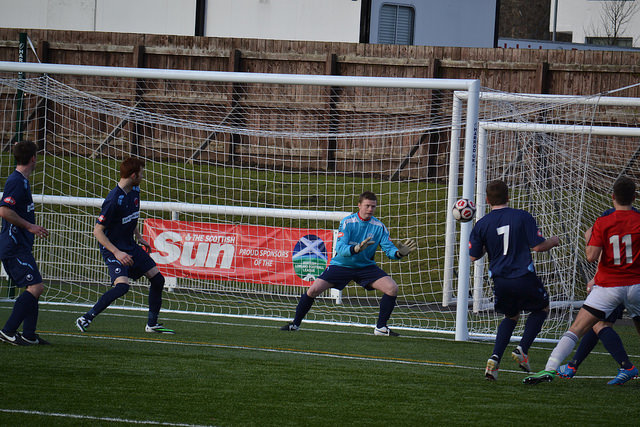 Spartans, Dalbeattie and Gretna all booked their places in the Scottish Sun+ League Cup semi finals after recording wins yesterday.

Spartans welcome Preston to Ainslie Park and the visitors almost scored early on after some good attacking play play from Paul Devlin almost resulted in an early goal.

After running through the Spartans defence, he squared to Max Todd but his shot was saved well by Blair Carswell.

Jack Beesley then came close to scoring for the home side when he got on the end of a Dean Horribine through ball. After breaking into the box Beesley’s shot went just wide of the post.

Spartans finally broke the deadlock when Paul Sludden broke the offside trap and as he raced into the box he squared to Craig Stevenson who slotted the ball into the empty net.

Horribine almost got Spartans second but Sean Brennan pushed his perfectly placed shot round the post at full stretch.

Spartans doubled their lead when a Sludden free kick from 30 yards came of the post and landed at the feet of Ali MacKinnon who rolled the ball into the net.

Scott Devlin almost pulled one back for Preston with a free kick from the edge of the box. Devlin’s shot had the keeper rooted but the ball hit the crossbar before going being cleared.

Both teams had chances in the second half but Preston’s hopes of a comeback were dashed when Max Todd was given his marching orders after he appeared to lash out at Spartans defender Ali MacKinnon.

With a few minutes remaining Jack Beesley was played in and slotted the ball past the keeper and into the net.

Jack Beacher went on a tricky run and he played in Dean Horribine who smashed the balled into the net to make it 4-0.

Elsewhere Vale of Leithen made the trip to Islecroft to face Dalbeattie Star.

Jason Stevens gave the visitors a half time lead when he headed home but the turning point was the sending off of defender Saunderson. Craig Fergusson then equalised with another header and with just a few minutes left Danny Dunglinson fired in a superb winner.

Iain Anderson bagged a double for Gretna at Netherdale to cancel out a Kyle Collins goal earlier in the game. Brandon Longcake ensured the visitors booked their place in the semis with a goal in the closing minutes.

BSC and East Kilbride will go head to head on Monday night to battle it out for the last semi final place.