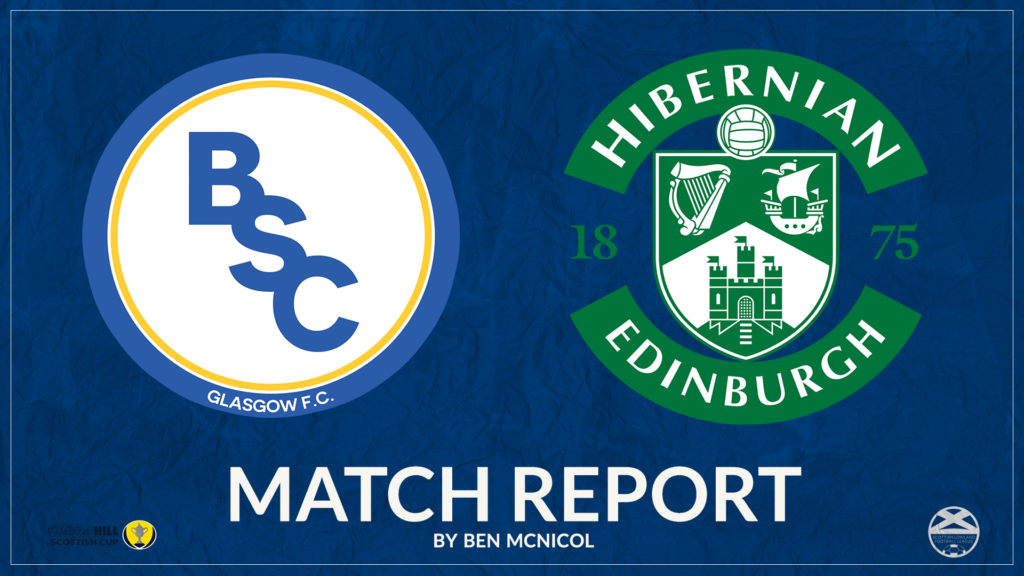 Our reporter Ben McNicol was at the Indodrill Stadium to see the biggest game in BSC Glasgow’s history.

You can check more of Ben’s work on his website where you can expect to see reports from his boyhood team Hamilton Accies as well as his ventures elsewhere, all the way from Lanarkshire to the Czech Republic.

It was biggest game in the Lowland League club’s history without a doubt, and despite them losing 4-1, they have absolutely nothing to be ashamed about as they made the top-flight side for work for their Quarter-Finals spot.

Despite falling 2-0 down early doors, Stephen Swift’s men bravely fought back and pulled one back through Ross Smith header.

However, McNulty added a third before unselfishly squaring the ball to the on-loan Greg Docherty to wrap up a Quarter-Finals place, where they were drawn at home against Inverness Caley Thistle.

BSC made two changes from their recent victory against Berwick Rangers. Robbie McNab returned from his suspension and replaced Jamie Hamilton while Ross McMillan came in for Jordan Marshall.

Hibernian head coach Jack Ross made three changes to the side that lost narrowly to Rangers on Wednesday with Steven Whittaker, Greg Docherty and Marc McNulty taking over from Darren McGregor, Joe Newell and Scott Allan.

The game got underway in the horrendous conditions, especially Hibernian who would have thought they were fighting with Storm Ciara for the first half.

It was the Premiership side who took the lead however on the 11th minute. The move started down the right-hand side with Martin Boyle.

He played McNulty through with an excellently timed pass and the 27-year old slotted it under Ryan Marshall.

A couple of minutes later, Christian Doidge looked certain to make it 2-0 but Ross McMillan made a tremendous tackle to deny the Welshman.

BSC’s first effort of the afternoon was nearly the equaliser. Thomas Orr picked up the ball in a dangerous area before his powerful effort was tipped around the post by Ofir Marciano.

Moments later, it was 2-0. Greg Docherty’s cut back wasn’t the greatest but McNulty done superbly well to readjust, control the ball and fire it into the top corner.

Stephen Swift’s men didn’t give up though and fought their way back into the game and pulled one back on the 38th minute. Declan Hughes floated a free-kick into the six-yard box and Ross Smith rose highest of all and guided his header over Marciano and into the far corner.

McNulty had a huge chance to complete his hat-trick on the stroke of half time, but his lob was well caught by Marshall.

The wind picked up in the second half and unfortunately ruined the game a little, but Thomas Collins spurned an excellent opportunity to pull his side level.

Jamie McCormick worked his way down the right wing and his cross evaded everyone apart from Collins, who’s mishit effort went out for a goal kick.

McNulty was given another golden opportunity to complete his hat-trick and this time he made no mistake. He latched onto a long ball which was held up in the strong wind, before running clean through and firing into the bottom corner.

It was four on the 84th minute when some nice link-up play between Jamie Gullan and McNulty resulted in Docherty having the easiest of tasks to tap home from six-yards out.