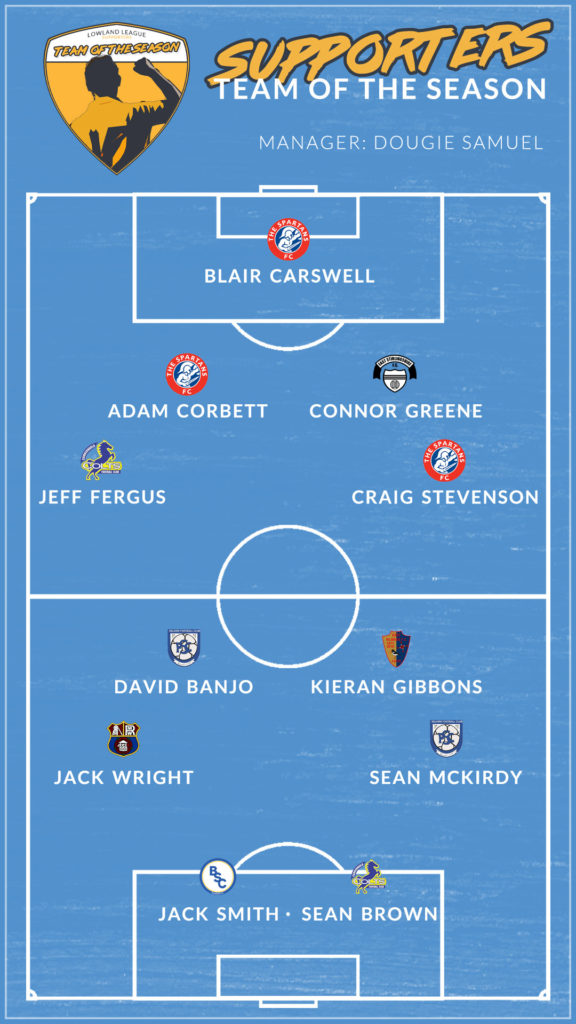 It comes as no surprise that the goalkeeper comes from the Champions’ side that had the best defence in the league. Spartans conceded only 17 goals in their 30 matches and Carswell was vital between the sticks. The shot stopper kept 14 clean sheets in his 24 appearances.

Mr Consistent at left back for Spartans this season. Part of the best defence in the league conceding just 17 goals throughout the campaign. Stevenson also had a habit of scoring absolute screamers. He netted the winner in a 1-0 triumph over Gala Fairydean Rovers with a curling effort from outside the box and smashed a free kick into the top corner in a 2-2 draw against East Stirlingshire.

A key part of Shire’s season that saw a second half resurgence that sprung them into title contention. Greene has made 154 appearances for the Ochilview side, with 35 coming this campaign. Is a threat in the air with 18 Shire goals to his name, only five away from becoming East Stirlinghire’s record holder for highest scoring defender. Won Shire Supporters Player of the Season for his contributions this term and has signed up for his fifth season at the club next year.

An Under 20’s graduate that has become a key presence at the heart of Spartans solid defence, helping to contribute in the side’s 17 clean sheets in their championship winning campaign. Also a threat from set pieces, netting in both games against Vale of Leithen. A committed defender, who spent 4 years in the academy, and was offered a contract extension over the festive period and said it took him two seconds to sign on the dotted line and stay at Ainslie Park.

Another youngster from the Cumbernauld ranks that has progressed through the youth system to be one of the first names on the team sheet for Craig McKinlay and James Orr. Played 2,653 minutes of football at left back for Colts, picking up a Ferrari Packaging Lowland League Cup winner’s medal in the process. A clear role model to other youngsters coming through the youth setup at Broadwood and had three goals to his name in an impressive year.

The energetic playmaker has been instrumental in Selkirk’s excellent season. Chipped in with 12 goals through the season, 5 of which came in the league. The 20 year old has certainly caught the eye of the supporters at Yarrow Park. Made his Scottish Premier League debut for Hearts against Partick Thistle in 2016 but was released at Tynecastle. Linked up with Hamilton Accies but moved to Yarrow Park after one season at New Douglas Park.

An ever present in Billy Stark’s East Kilbride team that stood out with his range of passing and ability to dictate the tempo of games. Excelled in tight matches, including victories over Spartans where he managed to get the ball to his feet and begin attacks as a deep lying playmaker. The former Livingston and Cowdenbeath man also chipped in with two goals from the centre of the park. His performances have earned him Player of the Season in the last two seasons at K Park. Has now left Kilby, but has been attracting interest from clubs as high as SPFL League 1.

A tough tackling powerhouse midfielder who had an excellent season for a hugely improved Selkirk side. Started his career at Tottenham in the same academy as the likes of Danny Rose, before he moved on to Walton & Hersham and AFC Wimbledon before coming north of the border, playing for teams such as Montrose and Berwick Rangers. Notched 7 goals this campaign, with 6 coming in the Lowland League. The one cup goal was a strike that gave Selkirk the lead in the Ferrari Packaging Lowland League Cup Final, but the Souters ended up losing out 3-1 to Cumbernauld Colts. He also found the net in important narrow victories over Gala Fairydean Rovers and scored the winner in a 3-2 triumph over Civil Service Strollers.

Son of Hibs legend Keith Wright, Jack had an outstanding season on the wing for Whitehill Welfare. He scored a 4 minute hat trick against Gala Fairydean Rovers in a 5-2 win back in September. The youngster, a product of Welfare’s academy, also picked up their Supporters Player of the Season after scoring 8 goals in his 24 appearances this term.

The league’s golden boot winner, Jack Smith was instrumental alongside his strike partner Martin Grehan in BSC Glasgow’s rise up the league this season. The diminutive striker brings pace and poise to Stephen Swift’s side, netting 21 goals in the Lowland League and 32 in all competitions.

The 21 year old was Colts man of the moment with 15 league goals to his name this season. Also scored a brace in the 3-1 victory over Selkirk in the Ferrari Packaging Lowland League Cup Final. Goals in other competitions took his tally to 25 for the season in 35 games, picking up Cumbernauld’s player of the year in the process. This season was an improvement from Brown’s 17 strikes last term and was tough to handle for defenders throughout the league with his pace and strength.

The long serving Spartans boss guided his side to the title in his sixth season in charge. Done brilliantly to overcome competition from high flying East Kilbride, a resurgent East Stirlingshire and transformed BSC Glasgow. Has created a real fighting spirit at Ainslie Park, which is proved by their large number of late goals, showing their fight right to the end. Couldn’t quite get past Cove Rangers in the play-offs but has still had a brilliant year.