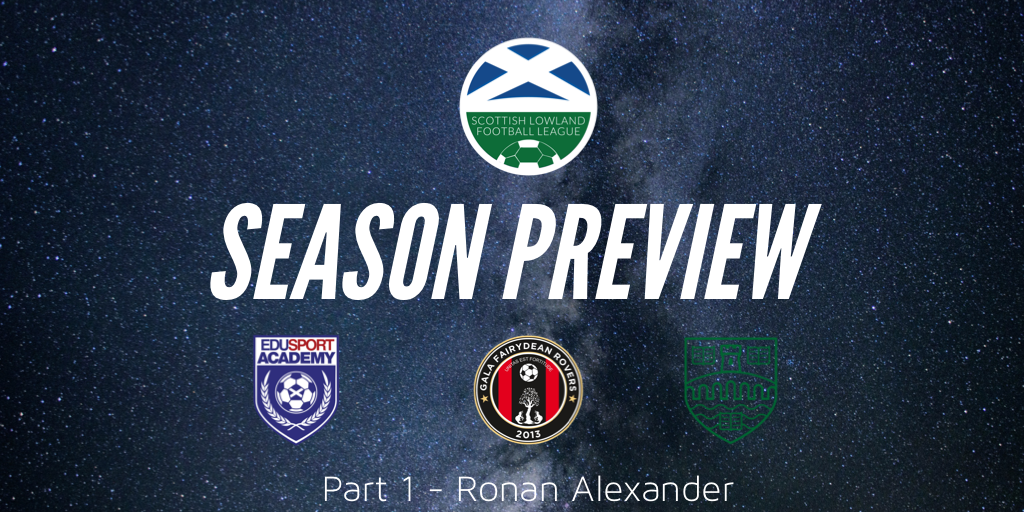 The new Lowland League season is just four days away. Here is part one of five previewing all 16 clubs giving a summary of what’s happened over the summer break.

Ricky Waddell’s men have had quite the transformation over the both on and off the park over the summer with a change in club name and a switch to a new stadium. Edusport Academy are now the Caledonian Braves, playing at their new home Alliance Park, at Strathclyde Country Park instead of ground sharing with Annan Athletic at Galabank.

Waddell’s side lost central defender Raffi Krissian to the Magpies Crusaders in Queensland, Australia as well as key attacking duo Matty Flynn and Scott McLaughlin to East Stirlingshire and Stenhousemuir respectively. However, they have recruited well to replace this trio with Ross McNeil joining from East Kilbride, David Winters making the move from BSC Glasgow and Dominic Slattery coming in from University of Stirling.

They have also added 20-year-old forward Neil McLaughlin following his release from Motherwell where he spent last season on loan at Stirling Albion with teenage midfielder John Guthrie also linking up from the Binos.

There have been nine new arrivals in total so far including goalkeeper Alex Marshall from Bo’ness United, Alan Reid, a right back with a wealth of experience having spent 12 years with Albion Rovers, left back Kyle Johnson who links up from Stenny and 23-year-old midfielder Reece Glackin.

The Braves pre-season campaign has been impressive, with a 6-2 win over Benburb before back-to-back 5-1 triumphs against Kilsyth Rangers and Rossvale.

On paper they again have a strong squad and will be looking to improve on last season’s ninth place finish but will need to work hard with several new faces on board and an even more competitive league than last year.

They begin their campaign with a trip to the capital as they take on Edinburgh University.

A 27-year-old who knows the Lowland League inside out having played for East Kilbride for the last three seasons with loan spells at the Caledonian Braves in between. Found the back of the net seven times last campaign and will be aiming to improve on that tally with regular first team football this time round.

After finishing 8th last season, a joint highest end to a campaign in the club’s history as well as reaching the third round of the Scottish Cup, Gala deciding to part company with gaffer Dean Shanks certainly raised some eyebrows.

However, Neil Hastings, formerly of Livingston is the new man in the hot-seat at Netherdale and he’ll be joined by Eddie Mangan.

After losing the core of last seasons squad, including Dale Baxter to Spartans, Tommy Patterson to Vale of Leithen, Ricky Miller to BSC Glasgow, Ryan Stevenson to Tynecastle and loanees Ruari Paton and Patrick Martin of Hibs have all moved on, it was going to be a difficult task for the new boss to rebuild.

However, he has so far made a positive impression with the key signing of local lad Danny Galbraith from Edinburgh City catching the eye. The 28-year-old winger boasts clubs such as Manchester United and Hibernian in his former clubs and is certain to be a hit with the local faithful.

Young defender Alex Chingwalu has linked up from Kelty Hearts along with Vale of Leithen trio Craig McBride, Marc Berry and David Bonnar making the move across the Borders.

They have a new goalkeeper in Fraser Morton who has joined from Edinburgh City, a team Gala lost 0-3 to in their opening pre-season friendly but did collect a 3-2 win over Coldstream last weekend and are due to welcome a Celtic XI to Netherdale on Thursday evening before they kick off their season by welcoming Cumbernauld Colts down to the Borders on Saturday.

A left winger originally from Gala looks to be their marquee signing of the summer as the Borders outfit aim for another solid campaign in the Lowland League. Galbraith’s pace and trickery will be vital. Turned out 63 times for Hibernian with his only goal being a dramatic late winner at Parkhead against Celtic. Last season featured 16 times in Edinburgh City’s journey to the League 2 play-offs but has been extremely unlucky with injuries in the past so keeping Galbraith fit could be key to a successful year at Netherdale.

A successful 2018-19 season at Forthbank saw the club end the league in tenth place, reach two semi-finals and make it to the third round of the Scottish Cup.

Player development is a key factor for manager Chris Geddes and he can be proud that three star performers made the step up to senior football as top-scorer Blair Lyons joined Montrose, Lewis Hunter moved on to East Fife and Rory MacEwan linked up with Elgin City.

This has led to the men in green appointing a new club captain which will be central defender Angus Mailer who played 4460minutes of football last campaign and featured in the Lowland League Team of the Season. He will be joined at centre back by new signing Ben Quigley who moved from St Johnstone with the 18-year-old spending time in the Lowland League last season on loan at BSC Glasgow.

They have four further new scholars on board including defender Giannis Kotzageogis and midfielders James Berry, Conor Doan and Jason Jarvis. Craig Brown has been promoted to vice captain and key players including Alex Webb, Kieran Hall, Kevin Walker and Matthew Burrows.

At the weekend continued their pre-season preparations by securing their first piece of silverware this campaign after defeating Camelon 3-2 in the final of the Westfield Tournament.

Former youth player with Carlisle United who has bags of tricks and an eye for goal. Was unlucky to miss most of the second half of last season through injury but still managed to contribute 14 goals and five assists in all competitions.