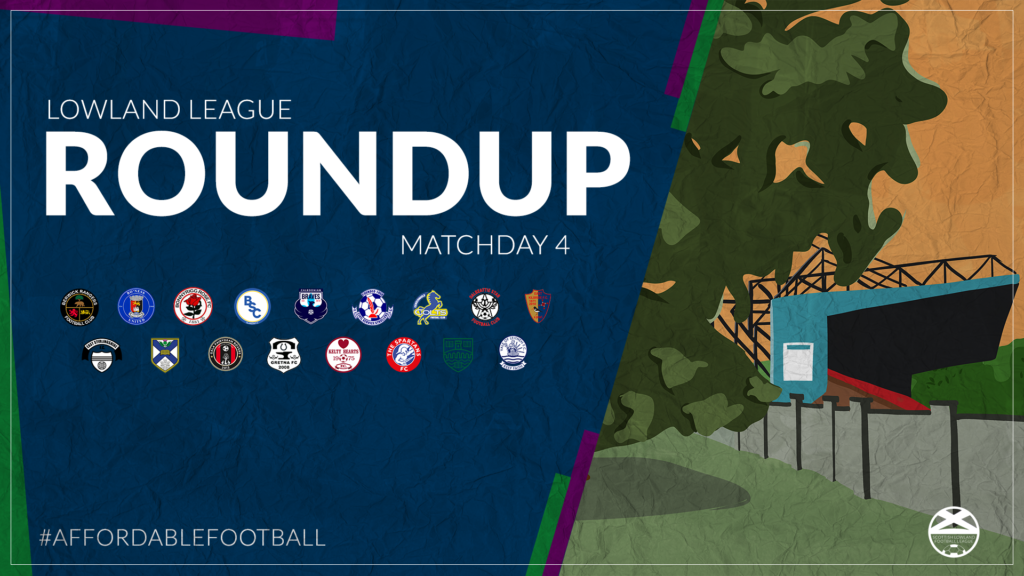 Bo’ness United continued their fine run of form on Saturday after moving past Caledonian Braves with a 2-0 win at Newtown Park.

League new boys Bo’ness now lead at the top of the pack on goal difference, while yet another defeat for Ricky Waddell’s Braves side sees them fall to 13th in the league, although they have a game in hand on the teams around them.

The opening 30 minutes provided little to talk about with teams settling themselves into the game, the only real talking point of the first half being a disallowed goal for The Braves.

The second half was much different from the first, with Bo’ness taking the lead on the 63rd minute when new recruit Nicky Locke sent in a pinpoint cross for Craig Comrie to tap home, who was making his first appearance of the season having recently returned from injury.

In the 80th minute Bo’ness would double their lead via a Ryan Stevenson penalty, after Braves debutant Ahmed Bouchentouf fouled Nicky Locke in the penalty area, with Stevenson making no mistake as he sent keeper Alex Marshall the wrong way.

Bo’ness took all 3 points in what is a mightily impressive start to the season, while Braves will look to pick up their first points sooner rather than later.

Both sides are in midweek action this week, with the BU’s hosting Civil Service Strollers at Newtown Park again on Wednesday night. The Braves will welcome Dalbeattie Star in an early bottom of the table clash on Tuesday night.

university of stirling 4-1 vale of leithen

It would be somewhat unfair to call Stirling University’s start to the season as a surprise.  Given the backdrop of unpredictability that surrounds just about every facet of football these days the excellent start of Chris Geddes is worthy of praise rather than query.

Lowland League strugglers Vale of Leithen found the student side just too hot to handle from the word go in this encounter.   The home team continued its fine league form by smashing four goals past McGinley in the Vale goal.

Penker continued his rich vein of form after only 3 minutes giving his side the lead before Robbie McGale added a second goal on 26 minutes.

Vale coach Chris Anderson changed things around considerably at half time shuffling his pack with Neave, Ndiweni and Rixon coming on.  But the change of cards seemed to do little to stop the home side who continued to dominate.

Penker added a third goal on 54 minutes making it virtually impossible for the Innerleithen side to find any way back into things.

Substitute Brad Rixon did give the visiting side something to cheer with what turned out to be purely a consolation.  The sub capitalised on an error by home goalkeeper Fry.

But any hope whatsoever of a comeback ended when fellow substitute Donovan Ndiweni was shown a straight red for using excessive force in a challenge on Stirling’s Callum Downie.

All that was left was time for Euan Baird to fire home a clinching fourth goal for Stirling University.

With Bonnyrigg Rose up next for Stirling University frontman Penker will again be looking to continue his fine run of form although he will be ruing his luck after this game given, he could and should have had a hat-trick.

Kelty Hearts maintained their 100% record in the Scottish Lowland League this season with a 2-0 home victory over Dalbeattie Star.

New signing from Raith Rovers, Grant Anderson made the perfect start to his Kelty career with a goal in five minutes before the lead was doubled just after the 20 minute mark through Jamie Stevenson.

The hosts had the ball in the net again but the linesman’s flag kept the score at 2-0.

There was no goals in the second half meaning the three points stayed in Fife as Kelty made it three wins from three while Dalbeattie Star, who have had a tough opening run of fixtures, are still looking for their first points of the season ahead of a trip to Caledonian Braves in midweek.

Kelty are also in action in midweek at home to Vale of Leithen.

Cumbernauld Colts got their first victory of the season with a 3-0 win over Edinburgh University at Broadwood Stadium.

Both teams came into this game searching for their first points of the season.

The hosts took charge of the match with two goals either side of the half hour mark. The first one from Billy Mortimer and a second from Scott Davidson gave the home side a deserved half time lead.

The Colts got a third late on with Stephen O’Neill finding the net with a few minutes remaining as Cumbernauld got their first three points of the season ahead of a trip to BSC Glasgow in midweek.

Meanwhile Edinburgh University stay bottom and pointless with a trip to Berwick on Tuesday to come.

East Kilbride continued their perfect start to the season after a late victory over 10-man Berwick Rangers on Saturday.

Former Livingston man Chris Erskine was the difference between the sides as he fired a volley home with 83 minutes on the clock.

The Wee Gers took the positives from the game despite losing Craig Reid to a second bookable offence on 72 minutes. Jack Cook, who made the Official Catchup Team of the Month earned Berwick’s man-of-the-match award after winning 13 aerial duels.

The result was Berwick’s fourth consecutive 1-0 result, with them winning twice and losing twice.

BSC continued their unbeaten run with Ross Lyon becoming joint top scorer in the division as his brace took him to five goals for the season so far. Meanwhile, The Anvils tough start to the campaign continued as they remain pointless. BSC host Cumbernauld Colts on Wednesday as Gretna are idle.

Gala claimed an important three points over Strollers at Netherdale. Last season’s top scorer Zander Murray was on target  for the hosts before Connor Young immediately equalised from the penalty spot. But Ross Aitchison and a Scott Taylor-Mackenzie wonder strike secured the win for the Borders side. Strollers are still searching for their first win and travel away to league leaders Bo’ness in midweek as Gala host Spartans.