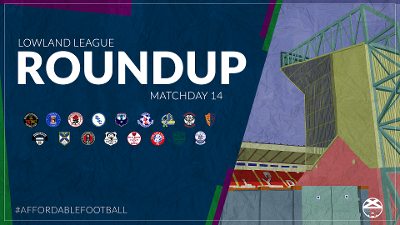 Gala Fairydean Rovers finished their brilliant year by inflicting Bo’ness United’s first home defeat of the season on Saturday after coming from behind.

The hosts went into the break in the lead, with Scott Taylor-Mackenzie having the visitors best chance on 24 minutes when he should’ve hit the target from 12 yards out.

Neil Hastings men found the equaliser on 65 minutes when Marc Berry made it two goals in two games after he netted in midweek at East Stirlingshire.

Gala kicked on from this point and got their reward after 81 minutes when Taylor-Mackenzie netted his 8th goal of the season as his terrific free kick found the top corner.

The result means Gala sit 6th in the table for Christmas, with Bo’ness in 8th although they do have games in hand on those above them.

A Ross McNeil inspired comeback by the Caledonian Braves was enough to see the points shared against Civil Service Strollers.

The windy conditions were no issue to Strollers in the first half as they handled the wind well, with Alieu Faye giving his side the lead after an excellent volley flew into the top corner to make it 1-0 to the visitors.

Strollers doubled their lead later in the first half after Ross Guthrie steered his front-post header past Yohann Chardon in the Braves goal.

Strollers were well worth their two-goal lead at the break, but the Braves turned on the style in the second half with Ross McNeil and Neil McLaughlin causing real problems for the Strollers defence.

Ross McNeil would eventually score Braves’ first goal of the day after sending a header home from close range to get his side back in the game.

McNeil and McLaughlin continued to prove problematic for Strollers, with the two combining brilliantly before McLaughlin was fouled in the box by on-loan Rangers keeper Lewis Budinauckas.

McNeil stepped up to take the penalty and expertly finished it while sending Budinauckas the wrong way, giving his team the equaliser.

The drama wasn’t done there however, with Neil McLaughlin being mere inches away from scoring the goal of the season after his volley from the halfway line thundered off the Strollers bar, before firing a freekick off the post in the dying minutes of the game.

Berwick Rangers and Cumbernauld Colts both went into the weekend’s Lowland League fixture at Broadwood on the back of away wins in the 2020-21 Scottish Cup Preliminary Round the previous Saturday.  Berwick’s win over Dunipace and Colts fine away win at Tynecastle bringing much needed prize money to both sides club finances.

Despite those fine wins neither club are located in the higher reaches of the Lowland League table with it likely both clubs are simply playing for mid-table respectability this season.

Eventually, it was Berwick who continued on successfully from the previous weekend’s cup exploits with a 2-0 win in Cumbernauld.

It had taken the visitors only 10 mins to take the lead via Grant Nelson who stroked home under the home goalkeeper Grier.  With the home side desperate to find a way back in Berwick went 2-0 up this time Lewis Allan finding the net thanks to an assist from Ward.

In the second period Colts made valiant efforts at trying to find a way back into things but in truth, but for the efforts of the home goalkeeper Grier, it may well have ended up more than just the two goals.

With Berwick meeting old foes Stirling Albion at home in the cup Colts know, on the back of this defeat, they will have to improve greatly if they are to take anything from a tough away tie at Highland League Huntly on Boxing Day.

Kelty Hearts took advantage of Bonnyrigg’s match postponement by increasing their lead at the top of the Scottish Lowland League to seven points following a 2-0 victory over University of Stirling.

The league leaders set about making it 12 wins from 13 games early on with an early claim for an opener when Hill headed goalwards but the referee determined the ball did not cross the line.

It took till just before the half hour mark but Kelty did get the ball conclusively over the line thanks to Nathan Austin as he hammered home the rebound after the visiting goalkeeper had made a save.

On loan Ryan Shanley doubled the lead for the league leaders shortly after following another rebound.

The students had chances with Penker being denied before Kelty had the chance to seal the points through Higginbotham but his penalty was saved however, it didn’t affect the ultimate result with the points staying in Fife.

The league leaders welcome Jeanfield Swifts in the Scottish Cup on boxing day while University of Stirling could potentially move up to sixth next week when they face Edinburgh University.

This seasons Lowland League has seen its fair share of high scoring matches and one look at the table tells you all you need to know as to which sides are leaking goals heavily.

Vale of Leithen are sitting on 0 points and are already sitting on a staggering -53 in the goal difference column.  And, after this home fixture at Peffermill East, the student side now sit on a goal difference of -41.  This was a painful hammering for the student side and they simply were swept aside by Kilby who moved the ball well in the final third of the pitch being clinical with finishing.

The only source of consolation for Uni is the 4 points that they have picked up so far; valuable points that gives the students some sort of cushion above the Innerleithen side at the bottom.

On a calm and clear afternoon where the rain threatened to fall but never came to much Kilby took an early grip of things in Edinburgh and this set the course for a fixture that was very one sided.  The opener came via a penalty, but the goal quickly opened the floodgates and East Kilbride added three more before HT to take a commanding 4-0 lead into the dressing room after a brace from Craig Malcolm, with Chris Erskine and Anton Brady also finding the net.

The one-way traffic at Peffermill continued in the second period and by full time captain Steven Bell was also amongst the goals as was debutant Tomi Adeloye who got a couple including another penalty. Darren Smith and Greg Stewart also added to EK’s tally but the game ended on a sour note with Uni being reduced to 10 men – an indication of a team who are simply scrapping and battling through fixtures.