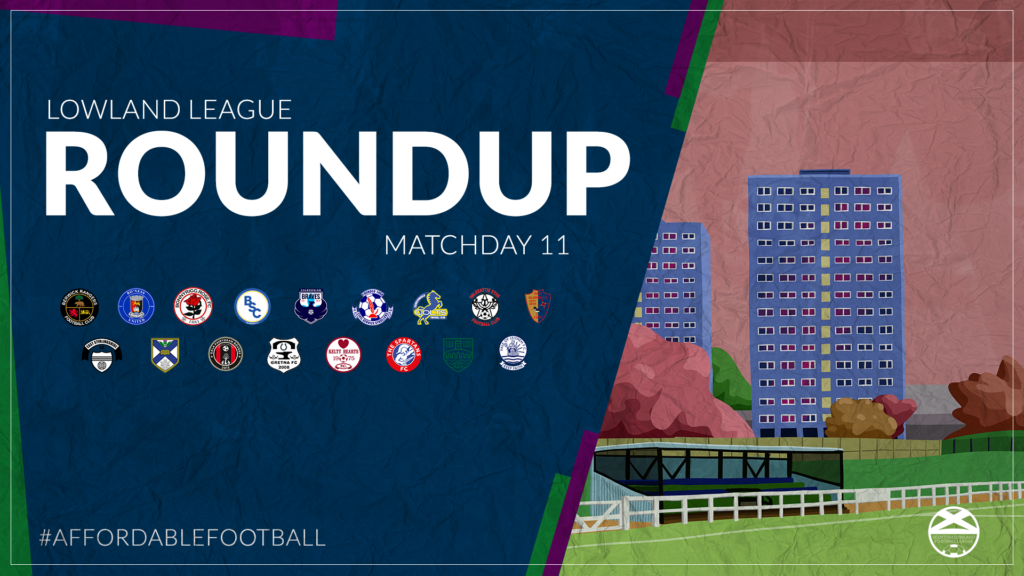 A low sun and a beautiful overhead blue sky conditions in Edinburgh would not have replicated the mood of the student side come 4.45pm.   The sun set of this fixture long before half time and dark clouds are now gathering down Peffermill way in terms of results.  Only a four points now separate University from Vale of Leithen at the bottom of the Lowland table.

For the second Saturday in a row BSC Glasgow came to the Lothians and struck home six goals without reply.  Last weekend’s cup win over Dalkeith Thistle was replicated in stunning form with a superb win over Edinburgh University the highlight of which was a Jamie Glasgow hat-trick.

It had only taken 9 minutes for the visitors to take the lead through a Declan Hughes free kick which should never have been allowed to creep in at the near post.  That then set the tone with BSC capitalising on a range of errors from the home side to clinically put four goals past the home side before half time including two strikes from outside the box by Glasgow.

A similar tone to proceedings continued in the second half with Andy Geggan possibly scoring the best of the bunch.  A far side cross at an angle reached Geggan and with an angled right foot strike he managed to squeeze the ball into the far corner.

Like they always do the student side tried to fight a way back into making the scoreline somewhat more respectable but it was BSC who struck a sixth goal thanks to a header from Tierney just before the end of the match.

Rose took the lead on the 18th minute when Currie scored his first of the game from the spot and th home side would go in at the break in front.

EK started the second half in the worst possible fashion as they were reduced to ten men with Kyle Hutton being given his marching orders.

The visitors unbeaten start looked in danger but the two timeLowland League champions showed what they are made off with four minutes to go when Ricky Miller headed home.

The drama wasn’t over as three minutes later the referee pointed to the spot again and Currie for the second time in the afternoon found the back of the net to secure the points for Bonnyrigg.

The result moves Bonnyrigg above East Kilbride on goal difference with the two sides both on 23 points, a point adrift of the lead duo of BSC Glasgow and Kelty Hearts.

Exciting times in Innerleithen and the surrounding Borders community thanks to floodlights now being on at Vale of Leithen. But unless the Borders team start picking up some Lowland League points then the lights may soon go out on the club’s stay in the Lowland League.

If ever a game was a tell-tale sign of why Vale find themselves in the critical situation they are in at the bottom of the table it was this fixture.  The opening goal came as a result of a relatively easy run on goal for Connor Young.  He fired home after running from close to the half way line after a simple chipped through ball was not dealt with by the home team.

The second goal was a comedy of errors again and as a result of calamitous defending.

Again another simple ball through from the visiting side of the field saw Vale unable to defend the home goal effectively.  This left Young with the easy task of chipping the home goalkeeper.

Vale tried to rally but even at this stage of the season the pitch at Victoria Park is, to put it mildly, not the best of conditions and it is easy to see why the previous weekend’s fixture against Heston was abandoned.

Strollers eventually put this tie to bed thanks to a clinical finish from the tall Alieau Faye.  An excellent advantage played by the referee allowed a Strollers attack to progress. With the resulting cross the ball was finished expertly into the top corner; a high angled finish that gave the home goalkeeper no chance.

All the goals came in the first half, with first courtesy of defender Dougie Hill. Dylan Easton who started the game brightly swung un a free kick from wide left and Hill rose highest to nod the ball back across goal into the corner.

Gala equalised from a set piece of their own as a corner deep to the back post was headed dowm by Gareth Rodger, and Scott Taylor-Mackenzie fired home his 7th goal of the season.

Kelty regained the lead five minutes later as the ball broke to Easton in the box, and he swivelled before lashing a left footed strike beyond the Gala keeper across goal.

The hosts had the better of the second half and can count themselves unlucky not to pick up anything from the game, but Kelty found a way to win as they now sit second in the table.

Dalbeattie Star made the long journey to the capital on Saturday to take on a Spartans side in good form.

The Star took the lead on 17 minutes with a goal of the month contender from Steven Degnan, who shuffled past a Spartans defender before firing a rocket into the top corner from just outside the box.

Spartans didn’t have to wait too long for an equaliser though after the in-form Archie Meekison showed some good control of the ball before volleying home from close range after 31 minutes.

Spartans doubled their lead right before halftime, this time it was Scott McCrory-Irving who expertly volleyed into the bottom corner after a knockdown from striker Aaron Murrell.

The second half was a quieter affair with nothing of note other than two disallowed Spartans goals. Spartans would kill the game in the 88th minute however with skipper Adam Corbett firing home after the ball fell to his feet at a corner.

This result sees Spartans sit in 9th place while The Star remain in 15th place after a difficult start to the season.

Daniel Smales’s strike on the 50th minute was the only goal of the game however the home side had the chance to make the win more comfortable but Lewis McGrattan missed from the penalty spot on the 70th minute.

The victory moves Gretna up to 13th place and Ronan Alexander’s side will aim to continue their good run of form when they welcome Bo’ness United next weekend.

Berwick Rangers’ second 1-0 defeat in a row drops them to 11th spot in the table and welcome second place Kelty Hearts next weekend.

The hosts were dealt with an early blow as Stephen O’Neill was red carded with 15 minutes on the clock. The referee blew for an initial foul and O’Neill looked to boot the ball off the Braves player on the floor which the referee deemed as violent conduct.

The Braves looked to make the man advantage count as their best opportunity in the first half came when Andy Dowie rattled the bar with a header from an in-swinging corner.

Dowie was the man who got the opener after 64 minutes when he bundled in David Sinclair’s free kick from the right.

Ross McNeil had a golden chance to seal it but Colts keeper Jonathan Grier made an outstnading 1v1 save as the visitors took the victory.

East Stirlingshire took all three points at Forthbank on Saturday after a clinical second half performance saw them sink a strong Stirling University side.

The Shire had the first real chance of the game on 14 minutes, after a long ball was played forward to the returning striker Sean Brown, who managed to knock the ball down to the oncoming Marty Orr, but he could only drag his shot wide of the post.

Stirling Uni had a chance of their own five minutes later when Jamie Penker raced through on goal, but his shot from a tight angle was saved by Shire keeper Ross Connelly.

Shire had another chance on 33 minutes, when Sean Brown managed to knock the ball past his defender, but his shot was saved brilliantly by Ben Fry in the Uni goal.

Shire were the more clinical side in the second half however, with an Andy Rodgers penalty giving Shire the lead after he was brought down while heading through on goal.

It was Andy Rodgers who would double the away sides lead just a few minutes later, after Nicky Low sent an excellent through ball into the path of Rodgers who calmly slotted past Ben Fry to make it 2-0.

The moment of the game would come in the 72nd minute. The roles were reversed this time with Nicky Low turning from provider to goalscorer, after an Andy Rodgers through ball found Low, who then managed to chip Ben Fry from a tight angle into the far corner of the net.

This result sees Shire in 5th place in the Lowland League, while Stirling University fall to 8th place after some recent losses.