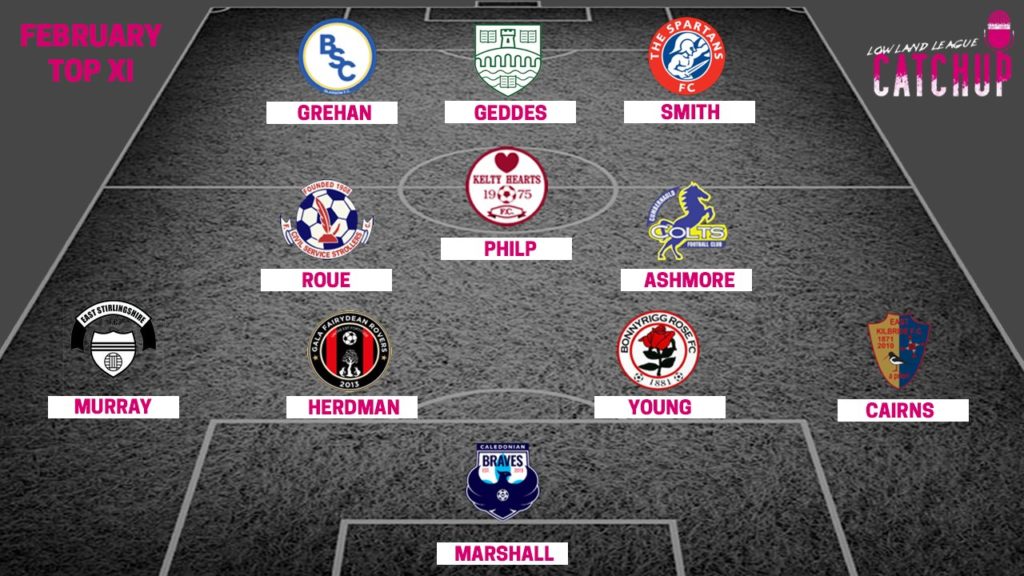 Rampant FM from the Lowland League Catchup gives us the lowdown to his Team of the Month for January’s matches.

We’ve been doing it since August and we try to change it up from month to month to make sure the players are getting full credit for playing well.

So far it has been successful and both the fans and players have enjoyed it. We’re at a point where it’s good to give an insight on what merits an inclusion.

First of all, it’s the top XI from the Top 11 clubs in the league – so unfortunately players playing from a club in 12th to 16th don’t make it in. That’s not to say their isn’t players playing well – it’s just easier to put a formation together with the standard 11.

Some might find it a surprising choice given Caledonian Braves have lost their last three league games, whilst conceding a few. Despite this, Alex has been impressive for the Braves and likely pulled off the save of the season against Kelty Hearts at the weekend.

Dean has been one of the first names on the Kilby team sheet during his spell and although he’s been playing in centre midfield, I think he’ll forgive me for putting him at right back. I think right back has been an issue for EK. Craig Reid (now at Kelty Hearts) was a mainstay last season. Dean, George Stanger (now on loan at Forfar Athletic) and new loan signing Liam Scullion have all arguably been played out of position to cover.

It’s been an excellent month for Adam. He’s been a stand out on the pitch and scored his first goal for Shire against Dalbeattie Star on his 101st appearance for the club.

I actually had to look back at previous TOTM’s cos I couldn’t believe Kerr had not made it in yet. Kerr has been solid throughout the season but clinching an important winner away to Dalbeattie was certainly worth an inclusion.

Honestly, there was a few boys that could have been made it in the team that haven’t featured before as Gala have been impressive lately. I was personally impressed with Ben when Kelty Hearts went down to the Netherdale. I thought he played well against Nathan Austin and was pretty solid throughout the game.

The Colts have not been the easiest pick over the last few months due to some stop/start results. Max started the season with Spartans but signed for Colts to be closer to home. Unfortunately, he picked up an injury which had him sidelined for a few months but has since returned to action. Max is a good footballer for this level and adds to an already decent midfield with players like Stephen O’Neill, who have previously made the Team of the Month.

Archie is a player I know well. I saw alot of him last season while he was playing for Kelty Hearts U20s in the Lowland Development league. He had a couple of appearances in the first team but left in the summer to trial with Dunfermline Athletic. It didn’t quite work out for him but it’s good to see him back getting first team football in the Lowland league for the Strollers. His debut for Civil, he scored a peach of a winning goal against rivals Spartans.

Ross is one of the most consistent players in the league and I’ve seen him play in almost every position on the park for Kelty. Ross missed most of last season due to injury but has come back incredibly well and has been one of the league’s top midfielders.

Delighted to be able to include Jack in this finally. Jack is an out and out goalscorer but has had a few injury woes over the years. Famously “made of chocolate”, it’s no surprise that Spartans have began to come into form since Jack has made his return.

It’s not everyday you get the opportunity to praise the job of a gaffer both on and off the pitch. I’ve spoken to Chris a number of times and he’s a guy I’ve got massive respect for – in terms of the job he does for Stirling Uni. I sometimes ask for recommendations from the clubs, gaffers, coaches etc. I can confirm that Chris didn’t pick himself out but I’m happy to include him this month.

Yaaaassss. He’s only gone and done it. Geddes gets on a long ball drives it home after a good save from keeper shows great reactions to bury it. Don’t have a picture – though we are all mentally scarred from the celebration to be honest 0️⃣-2️⃣ 55 mins

It’s probably tough for Stephen Swift not to play three upfront with Thomas Orr, Thomas Collins and Martin Grehan. Paulo has been on fire recently for BSC and fully deserves credit and included in this Team of the Month.

24. GOAAALLLLLL!!!!!! A BSC corner from Declan Hughes finds its way across the box and into the path of Martin Grehan who has time to control it and pick his spot on the farside of the goal.