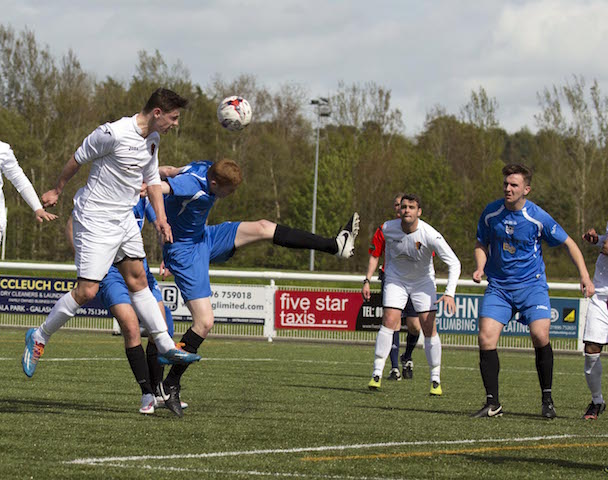 In the Ferrari Packaging League Cup three goals in as many minutes secured a victory for East Kilbride against Gala Fairydean Rovers.

Sean Winter put Kilby ahead with a penalty after twenty minutes after jack Smith was fouled in the box.

Smith caused problems for the Fairydean defence and when his shot hit the woodwork David Proctor was first to react and guided the ball into the net.

Just before the interval Ross Smith broke away down the wing and cut the ball back to Craig Hastings who flicked the ball home.

Hastings got his second of the game within a minute when his perfectly placed shot from 25 yards found the back of the net.

On the hour mark Fairydean pulled one through Jack Hay.

Kilby sealed the victory on the hour mark when Hastings beat the gala defender and played in Gavin Millar who smashed the ball home. (5-1)

Dalbeattie Star made the trip to Edinburgh to face Spartans in a repeat of last Saturday’s league tie.

Beesley broke down the wing before squaring to Murrell who slotted the ball into the net.

Ten minutes later and Beesley was causing problems again before playing in Murrell who again scored.

Dalbeattie got back in the game from the penalty spot when Jack Steele was bundled over in the box by Ewan Saunderson.

Lewis Sloan stepped up and sent the keeper the wrong way make it 2-1 at half time.

Dalbeattie levelled the match when Lewis Sloan whipped in a ball and Lee Wells nipped in front of the keeper to prod the ball into the net.

David Greenhill almost put the home side in front when but his long range effort smashed of the bar before the danger was cleared.

With it all level at full time extra time was needed and Spartans won the game when Jamie Dishington was played in by Murrell and fired the ball home. (3-2 AET)

Elsewhere in the Ferrari Packaging League Cup Gretna welcomed Selkirk to Raydale Park. Just as it looked like the game was going into Extra Time David Renyard slotted home to put the home side into next weeks semi final. (1-0)