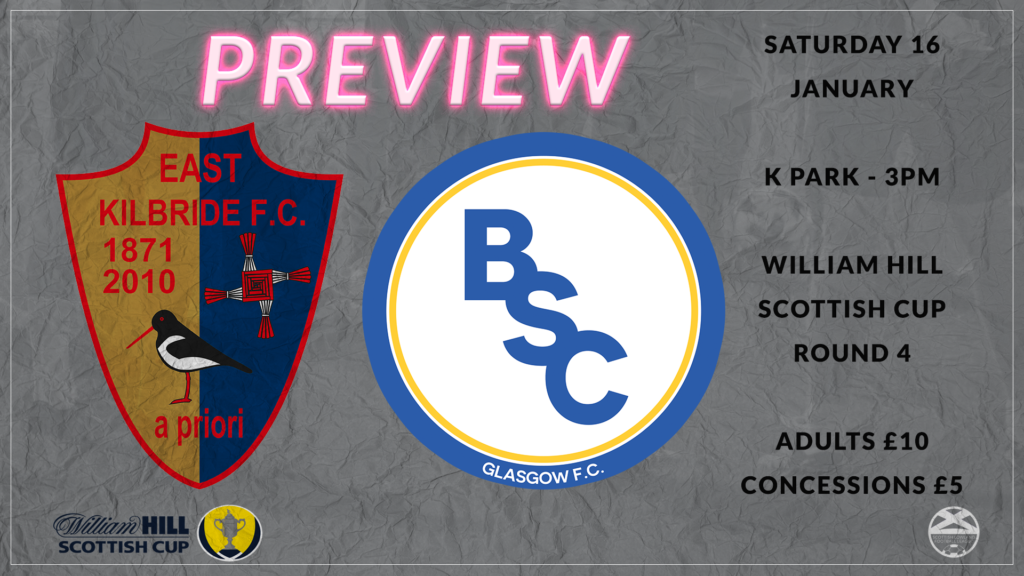 A big preview of the Lowland League clash as Ronan Alexander speaks to both gaffers Jim Paterson and Stephen Swift ahead of the tie tomorrow.

East Kilbride host BSC Glasgow in an all Lowland League clash in the fourth round of the William Hill Scottish Cup tomorrow with both clubs eager to set up a glamour tie in the next stage of the competition.

Both gaffers are expecting a closely contested game. Kilby manager Jim Paterson said: “It’s an absolutely massive game. It’s a game everyone is looking at because you know there’s going to be a Lowland League club in the next round.

“It’s a great opportunity for us but I’m sure BSC will be thinking that as well. To be honest I think it will be whoever handles the occasion better.”

BSC boss Stephen Swift said: “Games like this take care of themselves energy wise and most the boys will get through it on adrenaline alone so we’re looking forward to it but are under no illusions it’ll be a tough match.

“We beat East Fife to get here and in a lot of people’s eyes we don’t have the right to be here, but we’ll go and enjoy it and whatever happens, happens. It’s a 50/50 shout and whatever team turns up on the day will win.”

The men from the Indodrill Stadium got to this stage after defeating Lochee United after a replay before one of the club’s most famous results when they knocked out League One side East Fife in dramatic style. After finding themselves 3-1 down to The Fifers, Swift’s men turned the game on its head and Thomas Orr netted a stoppage time winner to seal a 4-3 triumph.

Orr and his strike partner Thomas Collins have been in blistering form this season having both netted 12 goals each in the league and that has caught their manager’s eye.

Swift said: “These guys are flying this year and must have so much confidence and want to make a name for themselves and this is the sort of game where they can showcase their talent.”

Along with these pair, BSC have a strong spine to their squad which Swift believes has been pivotal to their success: “It’s been absolutely huge. I’ve looked to the experienced guys to create that culture and bring the dressing room on and without that I don’t think we’d be where we are.”

BSC have had a run of three tough fixtures coming into the game. Narrow victories over fellow promotion chasers East Stirlingshire and Spartans were followed up by a last minute 3-2 defeat against Bonnyrigg Rose.

East Kilbride’s title defence has not gone to plan but Paterson has started to gather some momentum with three consecutive victories including a 7-0 demolition of Cumbernauld Colts in their last home match.

Paterson said: “Gradually over the course of the past few weeks we’ve been getting better and better and the boys have taken a lot of confidence from the good run.

“It’s upbeat at training and the tempo is high with everyone pushing each other for places on Saturday.”

After Stuart Malcolm departed K Park to take on the Forfar job, Paterson stepped up and has taken it all in his stride.

He added: “I’ve absolutely loved it. It’s something that has definitely been the next progression for me after being assistant at Stenhousemuir and getting promotion before working under Stuart Malcolm here.

“It just fell under my lap a wee bit earlier than expected but I’ve no complaints about that and it makes me hungrier for more.”

BSC won at K Park 2-1 on the final day of last season as games between the two clubs continue to be hard fought.

Swift said: “It’s a different game all together on Saturday but it might give the boys a bit of confidence and we drew 1-1 this season in a tough match.”

On the other hand, Paterson also recognises how evenly matched the two sides are: “The 1-1 match was a tight game, we scored a very good goal and conceded from a defensive error. It was end to end without many clear-cut chances but both teams dominated spells of the game.”

Highlights of the 1-1 draw earlier this season

Paterson has added to his team recently after the double signing of Ricky Miller and Daryl Healy from Berwick Rangers before Liam Scullion joined through the week from Hamilton after spending the first half of the campaign with League Two boys Stenhousemuir.

Paterson commented: “They will bolster the squad, but Liam and Ricky are both cup-tied, however the competition for places is brilliant.

“I have a very difficult job with selecting from a squad of 18/19 players that could all play. The hardest job I’ve got is keeping everyone happy and I’ve got no qualms with swapping any player.”

Other than that, the hosts will be at full strength for BSC’s visit. Paterson added: “There’s a few wee niggles but I have no doubt everyone will be fit for Saturday because it’s Scottish Cup week and everybody wants to play in it and are raring to go.”

Swift also has no injury worries heading into the game and is confident the players can execute their winning strategy.

He said: “We have a training session tonight (Thursday) so hopefully everyone comes through that unscathed, but you find in these big games most players want to be fit so we have a full bill of health at the moment.”

“I’m sure if the boys don’t play the occasion, stick to our game plan and maintain their discipline it will take a good team to beat us, but East Kilbride have been the benchmark for the Lowland League the last couple of years so we know how tough it will be.”