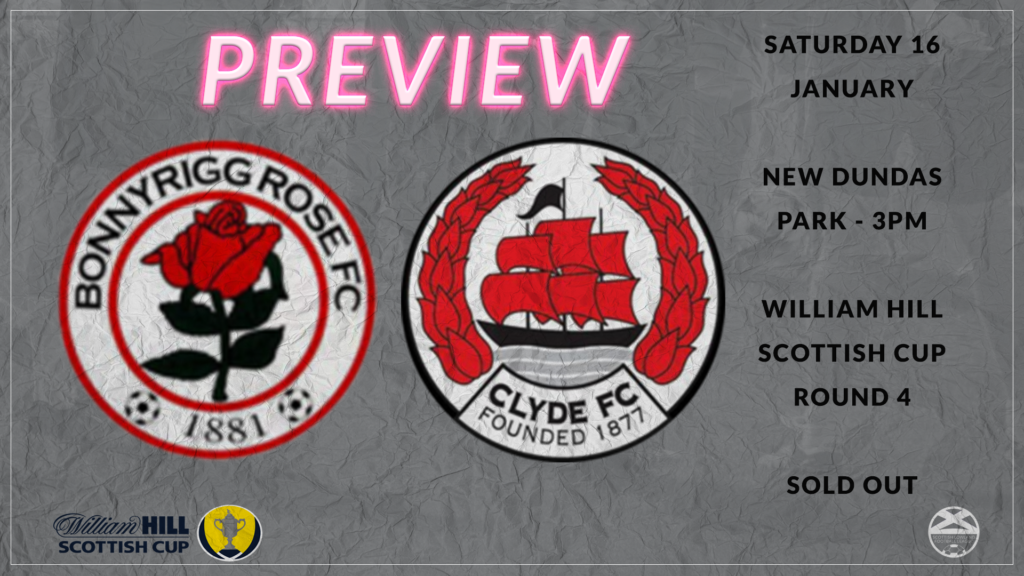 It’s GAME ON at New Dundas Park as it passes a pitch inspection ahead of Bonnyrigg’s clash with Clyde.

Bonnyrigg Rose are aiming to claim their second League One scalp of the season and make it through to the last 16 of the Scottish Cup as Clyde visit New Dundas Park which passed a pitch inspection earlier this morning.

The Rose’s home ground has sold out with over 2,000 spectators expected to be in attendance and manager Robbie Horn is grateful for the support.

He said: “They’ve really got behind the team and the club so it’s great and we hope we can get another good result on Saturday and keep everyone happy. We’re looking forward to it.”

However, the Bully Wee, who currently sit 8th in League One will provide a stern challenge for the Lowland League outfit but Horn’s men know what they’re up against.

He said: “We’ve had them watched. They have a really good squad of individual players and have real match winners in their team so it’s a big test for us but we’re confident we can cause an upset.”

Clyde’s last result was a dramatic 3-3 draw with Stranraer where top scorer David Goodwillie bagged a hat-trick to take his tally to 16 for the season. However, despite Clyde’s next top scorer only having two goals, there is plenty other dangermen throughout the team.

John Rankin has played at the top level with Hibs and Dundee United as well as winger Gregg Wylde who joined earlier this month from Livingston. On the other flank is Chris Johnston who was player of the year in League Two with Annan last season.

Danny Lennon’s men got to this stage of the competition after overcoming Stirling Albion 2-0 at Forthbank Stadium with Goodwillie and Darren Smith finding the back of the net.

For the hosts, they put out Highland League duo Fraserburgh and Buckie Thistle, the latter being on TV before their famous win over Montrose in the last round.

Goals have been well spread throughout the team with George Hunter, Lee Currie, Dean Brett and Jonathan Brown all scoring seven or more league goals already.

Horn said: “That’s been the case for the last few seasons. Our centre half’s have chipped in as well but it’s about keeping Clyde quiet first and foremost and doing our defensive duties before and when we get our opportunities, we take them.”

You have to go back to mid-November for Bonnyrigg’s last defeat, which was in a different cup competition against East of Scotland side Dunipace. But the Rose have now won seven consecutive games since then.

Horn added: “It’s been a difficult period for us with games being off but there’s been difficult games where we haven’t quite been at our strongest with players missing at different points but the full squad has been used so that shows the depth we’ve got.”

Their last result was a 3-2 win over BSC Glasgow at the Indodrill with Ewan Moyes bagging a last gasp winner which was crucial for their title push.

Horn said: “It was a massive result away to BSC who are a really good side and I think they still have a big say in what’s going to happen and are in with a shout of winning the league, but winning there was a real confidence boost.”

That confidence boost will be the ammunition Bonnyrigg are hoping for to provide another upset and make it to the last 16.

Rose will be without Kerr Young for the game today after his red card against Montrose in the last round means he is suspended.