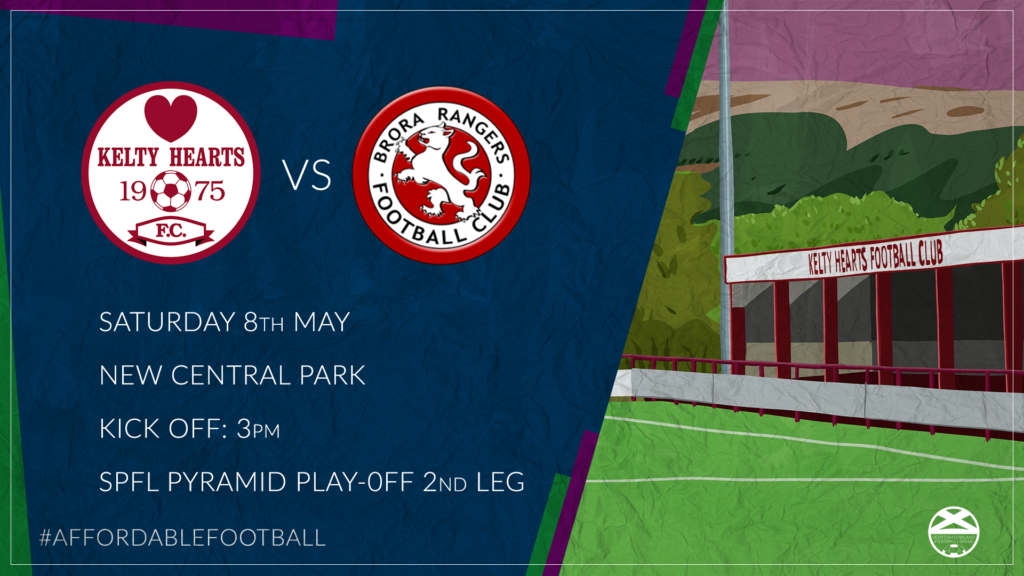 It’s advantage Kelty at the end of leg 1 as Barry Ferguson’s men travel back to Fife with a two goal cushion.

Both Barry Ferguson and Steven Mackay named highly experienced sides with new signings on the bench for each.  Brora Rangers lined up in its traditional all red kit and Kelty Hearts appeared in its away colours of all blue.

It was a calm and sunny evening if a little fresh, but the game kicked off in good conditions for such an important game.

Incredible the Cattachs survived an almost hellish opening nine minutes as Kelty Hearts missed two early penalty kicks.  The first came after Colin Williamson wildly charged into a tackle on the edge of the goal area leaving referee Irvine with no option but to award the pen.  Up stepped Kallum Higginbotham but his ill-judged effort at a Panenka chip saw the ball weakly fall into the diving arms of Joe Malin in the Brora goal leaving the striker with his head in his hands.

Both sides were clearly up for the occasion but again it was this high energy approach that forced Brora into conceding yet another penalty kick.  Nathan Austin showed superior fitness getting ahead of the Brora defence and Malin crashed wildly into Austin bringing him down just inside the penalty box.

While the kick this time from Austin was hit with more direction and purpose Malin sprang to his left to palm the ball away.

Exchanges by the first quarter of the game were countless and Brora were making the mistake of not feeling a way into the game choosing instead a high energy approach.   Having come through those early scares of the penalty kicks, Brora failed to settle wasting several very good chances to take the lead.

And, on 22 minutes the Lowland League side took the lead through a superb effort from Dylan Easton.  Advancing to the edge of the box, twisting the ball from his right to his left, the Kelty man crashed a swerving strike high past Malin into the top-left corner.

Brora however were showing huge ambition in the final third of the field with both Macrae’s having chances.  Jamieson twice blocked efforts and the ball swept across the Kelty goal face with no takers.  Kelty also had a goal disallowed just before the break due to handball but the half-time single goal lead for Kelty was not a score line the home side could have any complaints with.

The hills behind Brora are of the old coarse sandstone type and that mountainous skyline gave some clue as to a change in the playing conditions.

Brora once again came out all guns blazing pushing for an equaliser that their tactical ambition was deserving of.  Macrae sent a low effort narrowly wide from the edge of the box but Kelty were awarded a third penalty of the night on 56 minutes when the ball struck the arm of MacDonald.   This time Higginbotham chose not to take the Panenka option and instead put the ball low to Malin’s right as the goalkeeper dived to his left.

With the home side 0-2 down the hail and murky overhead conditions gathered making it somewhat uncomfortable for both teams.  Several dangerous balls swept across the face of both goals with Brora frontmen unable to finish while Kelty Hearts and Nathan Austin had numerous chances to make the second leg a formality.

Brora knew a goal back would give them some hope ahead of this Saturday’s second leg, but the chance to get a goal was prevented thanks to a spectacular save by Darren Jamieson who tipped a goal bound header over the crossbar.

The loud cheers that came from the Kelty Hearts directors at full time spoke volumes for a club who know they are 3 games away from a place in SPFL League Two.  Brora Rangers showed enough in this game to show they are very capable of going to Fife and getting an early goal, but they will have to be far more tactically disciplined if they are to avoid conceding to the dangerous front players of Kelty Hearts.

You can purchase the second leg courtesy of Kelty Hearts TV here: https://keltyhearts.co.uk/kelty-brora-virtual/