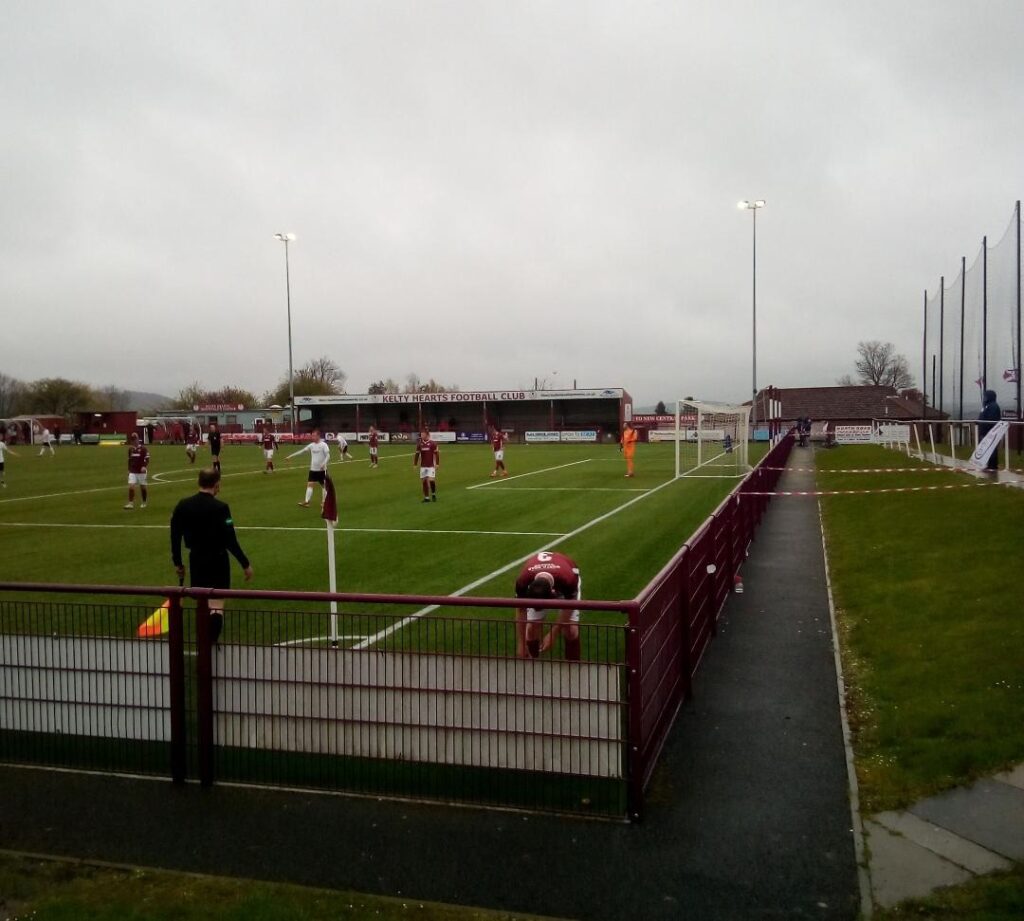 Kelty progressed to the next stage of the League 2 Promotion Play-Off after a 6-1 aggregate victory over Brora Rangers and will now face Brechin City next week.

Nathan Austin was the man whose goal scoring exploits were the difference in the second leg of this SPFL play off. But his pivotal striking prowess should not deflect from his side who were by far the stronger over the two legs.

A diving header, a clinical finish right foot after a one on one with the visiting goalkeeper and a spectacular left foot free kick are what the record books will show with the frontman’s top-class performance finishing off any hopes Brora had of a comeback in Fife.

The opening exchanges followed the same sort of pattern as those of midweek in the Highlands.  High energy rather than tactical discipline was on show with Kelty forcing a couple of corners and Brora using the physicality they had up front to pose questions of the home backline.

That penetration of the home backline had already seen centre half Dougie Hill go off when Greg Morrison capitalised on a Bjorn Wagenaar pass to burst clear and calmly finish past Darren Jamieson.

However, once again the lack of discipline within the Brora side was shown when almost immediately on 30 minutes a burst forward saw Austin poke the ball goalwards with his right boot and finish despite Malin’s efforts.

Brora never gave up and withstood a penalty appeal late in the first period.  The Highlanders were trying to force some way back into things but by half time it was clear Kelty Hearts still had a lot to do if they were to win through to the play off final.

While Brora came out all charged up and ready for battle Kelty’s second half performance blew Brora away.   On 58 minutes Kelty got the crucial third goal.

From the left a Boyle cross from the left that was struck over at knee height.   Austin showed excellent skill to meet the ball with an angled downward header and the ball softly nestled in the corner of the net.

Just 5 minutes later the danger man Austin was tripped on the edge of the area.  He then dipped a left foot effort over the wall and beyond the dive of the goalkeeper who was positioned to the right.

Austin was then substituted for Russell getting a well-deserved round of applause from the Kelty touchline and his teammates in the enclosure.

Brora’s heads went down, and the morale of the side must have been compounded by the terrible conditions as it never stopped raining from the first blow of referee Anderson’s whistle.   That drowning feeling was reinforced even more in stoppage time when a first time Dylan Easton effort from the edge of the box claimed number four for the maroon kitted side.

Brora Rangers manager Mackay had harsh words for his side at full time but in truth there was no lack of effort on show.  How Brora failed was a stark lack of an ability to play settled, controlled football instead choosing a high energy approach that the pacey Austin capitalised on time after time.

The will it happen won’t it happen nature of the play-off for a place in the SPFL has now reached the much-predicted end game.  What sort of game is in store is anyone’s guess but the confrontation for a place in next season’s Scottish Professional Football League is taking place with Kelty Hearts clear favourites.

If Brechin City can learn anything from the two semi-final matches it is to keep things tight in the centre of the park and in defence as Kelty have too many dangerous offensive players who can take advantage of slip ups very clinically.

Brechin City have struggled for over two seasons now in SPFL 2 and need to turn this into a battle to win.  There is no doubt whatsoever Kelty will win on ability and confidence.

It may well be the home leg at New Central Park on Tuesday May 18 that is the key  winner.  No matter the score in Fife it’s hard not to see the tie at Glebe Park on Sunday week being anything apart from tense.