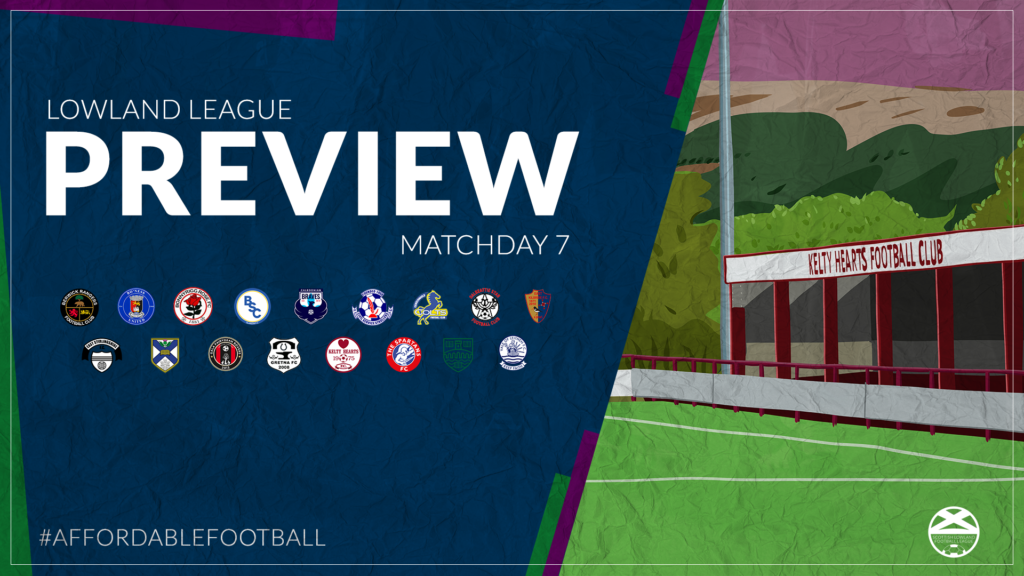 Some massive matchups this weekend at both ends of the table, find every preview here

Cumbernauld Colts will be aiming to build on an impressive point away to Bonnyrigg Rose last weekend that could have been all three.

The Colts started the campaign with consecutive defeats before getting off the mark with a 3-0 triumph over Edinburgh University. Tough fixtures against BSC Glasgow and Bonnyrigg Rose followed that up where they managed to get a draw in the latter fixture.

Last seasons top scorer Marty Wright is still to get off the mark but did score on his Cumbernauld debut against Gala last season.

The visitors come into the match full of confidence after securing back-to-back 3-1 victories over Edinburgh duo Civil Service Strollers and Spartans. Scott Taylor-Mackenzie has caught the eye with four goals this season, as well as Zander Murray who has two and celebrated his birthday during the week.

The two sides have met each other eight times, with Cumbernauld winning four, two draws and two wins for Gala with the most recent match at the end of last season getting postponed.

Two of the Lowland League title favourites meet at New Central Park in a crunch match that could be crucial in the long run for the title race.

Both teams come into the match unbeaten, sitting second and first in the table respectively.

The hosts come into the match having won all five league matches so far, keeping a clean sheet in their last three. New signing Grant Anderson has hit the ground running since he joined from Raith Rovers. Scott Hooper grabbed the winner in a narrow triumph over Caledonian Braves in horrible conditions last weekend.

The visitors are a point ahead of the hosts but have played a game more and have kept a clean sheet in their last four matches. That was helped by the fact new keeper Conor Brennan saved a late penalty in their 2-0 win over Spartans. Their toughest test came after a visit to the Falkirk Stadium where their match against East Stirlingshire ended a goalless draw.

Both sides will be littered with players who have SPFL experience and both managers will be looking for them to step up on the big occasion and lay down an early season marker to see who is the early pace-setters.

Kelty won both fixtures between the sides last season 1-0.

Edinburgh University’s 1-0 win over Gretna last weekend might not have taken top billing on Sky Soccer Saturday’s results show but there is no doubt for the student side it was a huge win.

Every point on offer is crucial to EUAFC in its efforts to stay in the league but the goals for and against statistics this season offering a rather stark and telling story.

After only 6 fixtures this season Edinburgh University are already on -14.  However, it is a consistent ability to pick up a win and a fighting draw every now and again, just as they did last season, that seems to keep Uni just away from trouble and no more at the bottom of the Lowland League table.

Similar battling qualities will therefore we required against Braves who have struggled themselves this season all be it they look stronger at the back and less open.

A draw will be a great result for the home side, but Braves will want a win if they are to make any ambitious moves up that table.

university of stirling vs dalbeattie star

Last weekend’s 1-0 reverse for Stirling University against Civil Service Strollers in Edinburgh was a setback for the student side. After a solid start to the Scottish Lowland League campaign, the strong winds and driving rain made conditions tough for what had been a free scoring Stirling team going into the game.  Ultimately it was a flat performance from Stirling’s key players which resulted in the loss to Strollers.

While Stirling endured those miserable playing conditions and a proper soaking similar weather fronts did lead to the Dalbeattie Star fixture against Bo’ness – also pencilled in for Halloween – being postponed. This means that Dalbeattie have still to pick up a point this season after 5 league fixtures.

Star did register a win against Stirling last season but University will be looking to home advantage at Forthbank to offer them another 3 points in what has been a positive campaign so far.

It’s a minor rivalry this weekend as BSC Glasgow host The Spartans at the Indodrill. BSC remain undefeated while Spartans will be desperate to shake off their previous losses and grab a win.

Stephen Swift’s men remain undefeated and will hope to continue this run of good form. A draw last weekend against Berwick Rangers will feel like a loss for BSC but they still sit near the top of the table. The last four meetings between these two sides have all been in BSC’s favour. Good performances against Gretna 2008 and Cumbernauld Colts will have BSC’s morale high but Spartans could pull a win out the bag especially since they’ll wish to end a negative run.

It’s been two wins in five games for the Edinburgh men – three previous games have all been losses to Stirling Uni, Gala Fairydean Rovers and East Kilbride. The former champions will need to end this poor run if they want to reach their success in previous seasons. Spartans will also want to end their run of defeats against BSC with these head-to-head fixtures having a lot of last minute goals. Spartans first two games were wins against Gretna and Berwick so they’ve proven they can win games and they got a win against Berwick which BSC couldn’t.

Gretna 2008 vs Vale of Leithen

It’s a tale of two teams at the bottom of the table as Gretna host Vale of Leithen. Both teams sit at zero points each so this is a crucial game for either side.

Gretna’s opening fixtures weren’t the easiest with defeats from Spartans, East Kilbride, Bonnyrigg Rose and BSC Glasgow. Last weekend, Edinburgh University grabbed a crucial three points with a 1-0 win over Gretna. Previous fixtures against Vale of Leithen have been in Gretna’s favour so they may go in as minor favourites.

The men from Innerleithen have been in a similar position with defeats from Bo’ness, BSC Glasgow, Stirling Uni and Kelty Hearts. Last weekend, they suffered a massive 7-0 loss against East Stirlingshire and a win against Gretna would be crucial. Both teams have proved they can score goals despite losses so this game is important for both clubs.

Bonnyrigg Rose will make the journey from Midlothian to Falkirk on Saturday as they look for a vital 3 points to end their recent run of draws.

Bonnyrigg go into Saturday’s encounter having drawn their previous two matches 1-1 to the University of Stirling and Cumbernauld Colts.

The Rose will be without key midfielder Lee Currie, who was sent off against Cumbernauld Colts last Saturday, which will undoubtably be a huge blow to Robbie Horn’s men.

Derek Ure’s East Stirlingshire side will be in high spirits coming into this game, as they remain unbeaten so far with 4 wins out of 5, the only drop in points coming to title-challenging East Kilbride in a 0-0 draw last Wednesday.

Both sides will be looking for wins to show they are in the title hunt this season alongside the high-flying Kelty Hearts and East Kilbride sides.

Kick-off is strictly behind closed doors at The Falkirk Stadium at 3pm on Saturday November 7th. The game is available via livestream on Shire TV for £5.

Two of the Lowland League’s newest clubs who will both be happy with their starts to the season meet at Newtown Park on Saturday.

The BU’s come into the match fresh having had their match against Dalbeattie Star postponed last weekend. This will be Bo’ness fifth home game for only their sixth match of the season so far and Newtown Park has been a bit of a fortress so far as they are unbeaten. The home side also have goals well spread throughout their team with eight different goalscorers already this campaign.

The Wee Gers have also been secure in defence, and their results show it. Four 1-0 games, with two of them being wins and two defeats, a 3-1 triumph over Edinburgh Uni and a goalless draw with BSC Glasgow last time out. Midfielder Jordan Sinclair also won goal of the month for his 35 yard free kick against Vale of Leithen.