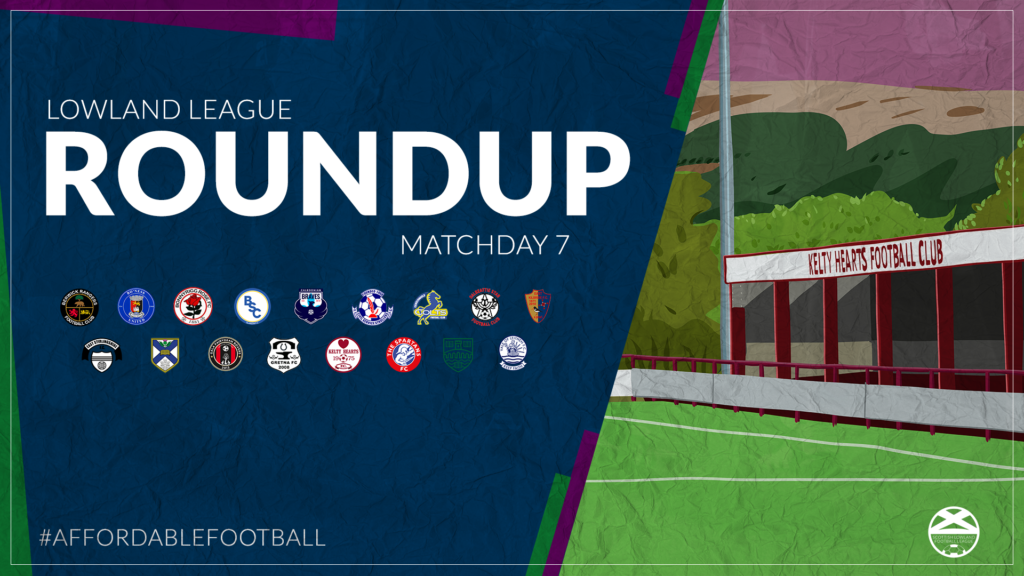 East Kilbride win the big one at the top over Kelty, Shire beat Bonnyrigg and Gretna get off the mark against Vale

East Kilbride grabbed a massive three points with victory over last seasons champions Kelty Hearts to climb to the top of the Lowland League table.

There was little to separate the sides as expected, and not helped by the foggy conditions. But the winning goal arrived on 67 minutes when Chris Erskine found Paul Woods who hit the post and Kyle Wilkie was on hand to follow up and fire home.

Erskine had another opportunity on the counter-attack as Kallum Higginbotham couldn’t latch onto a low Dylan Easton cross for the hosts equaliser.

The victory that sees EK go top also inflicts Kelty’s first league defeat in 26 games. Kilby travel to Dalbeattie on Wednesday as Kelty turn their attention to the BetFred Cup as they host Peterhead tomorrow.

It was a huge win for Gretna 2008 at Raydale this weekend while some horrendous struggles for the men from Innerleithen.

Despite originally billed as a battle at the bottom, Rowan Alexander’s men proved they were no match with Vale of Leithen. Lewis McGrattan opened the scoring only fifteen minutes in with Daniel Smales finding another only five minutes later. These two men would be the sole scorers that afternoon despite the resultant scoreline.

Smales grabbed another immediately following the restart, McGrattan secured a brace soon after with Smales securing the match ball in the final five minutes.

Gretna will hope this is the catalyst for a positive run of form, meanwhile this result forces Vale of Leithen to continue with zero points and sitting at a lowly -26 goal difference. Vale travel to Spartans midweek and Gretna are away to Caledonian Braves.

East Stirlingshire extended their unbeaten start to the season after a 2-1 win over last season’s runners up which sees Shire sit 3rd in the table with a game in hand on the teams above.

Bonnyrigg Rose arrived at The Falkirk Stadium in need of a win after two draws in their previous two games. The Rose were without Lee Currie which proved to be a big loss.

Shire returned with their own threat on goal, as Andy Rodgers set up on-loan Partick Thistle striker Dean Watson, but he could only drag his shot wide of the post.

Shire took the lead in the 38th minute, after a lobbed ball in behind the defence found Dean Watson, who made up for his earlier miss by powering the ball home on the half-volley from a tight angle past a helpless Mark Weir in the Bonnyrigg net.

Shire’s lead didn’t last long however, as just two minutes later The Rose were awarded what seemed a soft penalty when Dean Brett was seen to be fouled in the Shire box. Brett made no mistake from 12 yards, as he thundered his penalty into the top left-hand corner.

Shire would then be awarded a very soft penalty of their own just minutes later, after dangerman Dean Watson rouletted past two Bonnyrigg defenders on the touchline before weaving past another two and eventually going to ground, much to the anger of the Bonnyrigg defence. Andy Rodgers slotted the penalty into the bottom left corner for his 100th Shire league goal.

The second half would be much quieter than the first, with Shire aiming to hold their lead rather than extend it.

Andy Rodgers came close to extending the lead just after halftime, after some more quick feet from Dean Watson allowed him to force Mark Weir into a save, but Rodgers did poorly with the rebound from 12 yards.

Bonnyrigg’s best chance of the second half would come in the 55th minute, after the lively Dean Brett sent a brilliant ball across goal but unfortunately for The Rose there was no one to get on the end of it.

It was a nervy ending in the final 20 minutes with lots of long balls being played forward by both teams, but Shire would have been relieved to hear the final whistle.

This result sees The Rose fall to 7th place after some costly results in recent games. Shire on the other hand move to 3rd place as they look to continue their title challenge.

Both sides are back in action on Wednesday night with Bonnyrigg playing host to Civil Service Strollers while Shire host Cumbernauld Colts with both games available via livestream.

Stephen Swift’s men moved further to cement their impressive position at the top of the table. Despite a late own-goal, the Edinburgh side couldn’t dominate possession and continue an unfortunate run of losses.

Immediately out the gate, BSC newcomers Jamie Glasgow and Craig McCracken, both on loan from Auchinleck Talbot made an impression. In the 15th minute, a terrific long ball up the field found Jamie Glasgow on the edge of the box and some lovely footwork allowed him to get the half volley away and open the scoring.

The first half went much more BSC’s way. The second goal arrived just after the half hour mark – Michael Anderson’s strike from 25 yards out trickled through the Spartans defence and keeper Harry Stone couldn’t get a hand on it.

Only minutes after the break, a terrific run from BSC’s Jamie Hamilton allowed him to lay off Ryan Tierney who easily made it three for the home side.

The game then fizzled out, despite Jamie Mills scoring an own goal for BSC in the last ten minutes when he attempted to head it back to the keeper but over shot his mark and it found the back of the net.

BSC Glasgow go into a top of the table clash midweek against Bo’ness United while Spartans face a struggling Vale of Leithen.

With a lot of the attention at the top of the table, perhaps the result of the weekend was for Dalbeattie Star who grabbed their first three points of the season.

Last weekend’s 1-0 reverse for Stirling University against Civil Service Strollers in Edinburgh was a setback for a student side whom had started the season in highly positive form.

During the very early stages at Forthbank Stadium it looked like Chris Geddes’s side would get back to winning ways.

However, it was Dalbeattie who struck first.

A nice move ended with a free kick being awarded to the visitors and it was fired home right footed by Lewis Sloan although it has to be said the Stirling defensive wall was far from solid as the shot came in.

Big thank you to George Vekic for capturing Lewis Sloan's opening goal in our 4-2 win against @StirlingUniFC this afternoon. pic.twitter.com/AccWDtXvFb

On 16 minutes the visitors added to that lead with Ross Irving shooting a long range strike past Ben Fry.

With Stirling the form side, it was no surprise when they got back into things.   Jason Jarvis firstly struck a deflected shot home and then dangerman Penker headed home to tie things up at 2-2.

Into the second half Stirling may well have went ahead but Dalbeattie showed great character to push forward with Ross Irving getting his second on the hour mark.

And, the game was eventually put out of the reach of Stirling when Daniel Orsi – who has experience with both QoS and Annan Athletic – curving a strike past Ben Fry to give Dalbeattie a 4-2 lead.

Overall a good game with the fixture being tightly balanced for spells and it could have went either way.  Stirling Uni showed they are dangerous and will look to regroup looking ahead to the game against Berwick Rangers during the week.

Reaction from Chris Geddes (@Journeyman09) following today's loss against @dalbeattiestar. On to Berwick on Tuesday. Credit to @CharlieHarris99 for the interview. pic.twitter.com/z4XJB4HXGQ

Football fans are rightfully missing those Saturday afternoon trips to Lowland League grounds.  With winter approaching there are livestreams a plenty online each Saturday at 3pm to enjoy with lots of opportunities to watch online from the living room.

Those that did tune in online for this clash will have witnessed a game where the visitors held on for a win but only just.  Despite a fighting second half comeback from University at Peffermill East, the Braves were worthy winners thanks to two early goals.

Braves had taken the lead thanks to a header from Andy Dowie.  Dowie got on the end of a dangerous corner to power home a header at the back post giving the goalkeeper little chance.   The second goal for the visitors came just seven minutes later.   Jamie Walker made a good run down the wing and his cross was unfortunately turned into his own net by Hamilton.

In truth, Braves could have added to those two early goals but it was Uni who showed typical fighting spirit to drawn themselves back into things during the second half.  Paddy Baird again was showing good touches for the home team and he looks a key player both thanks to a goal danger and inter link up play.

Into the second half and University pulled one goal back; Maskrey shooting left-footed past Marshall.

The home side may well have equalized and Braves themselves might have added to the two-goal lead. But with darkness falling in the shadow of Arthurs Seat it was the Lanarkshire team who went back to the West well deserving of the win.

Match highlights are available on the Caledonian Braves app.

Gala Fairydean Rovers made it three wins on the spin to climb to sixth in the table after victory at Broadwood Stadium on Saturday.

Last season’s player of the season Ben Herdman fired the Borders side in front on 17 minutes. The rest of the action didn’t arrive until the final 15 minutes.

Ross Aitchison looked to have sealed the points after 77 minutes with his second goal of the campaign. However, Lee Whitmore scored for Colts in added time to set up a nervy finish but the visitors went home with the three points.

Gala will look to extend their winning run at home to Edinburgh University on Tuesday. Meanwhile, Cumbernauld’s difficult start to the campaign won’t get any easier when they travel to unbeaten East Stirlingshire on Wednesday.

The hosts took the lead just after the half hour mark from the penalty spot with Ryan Stevenson converting before the lead was doubled in the second half thanks to a Kieran Anderson strike.

The visitors fought back with 13 minutes to go thanks to a Dan Purves side footed finish but it wasn’t enough and Berwick were unable to find an equaliser in the time remaining.

The result leaves Bo’ness sitting in fourth place with Berwick in ninth.

Bo’ness welcome BSC Glasgow to Newtown Park on Tuesday while Berwick are also at home as they play host to University of Stirling.