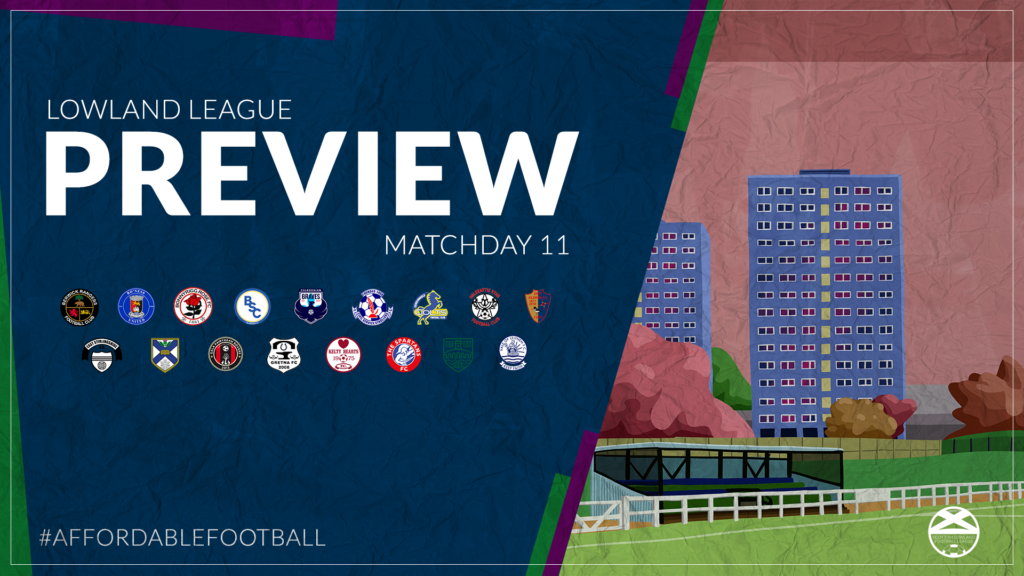 One unbeaten team remains heading into matchday 11, here’s what we have in store

The midweek Lowland League fixtures saw the goal difference of Edinburgh University take a pummelling at the hands of fellow Edinburgh side Spartans on Tuesday.  The manner of the 1-6 home reverse will have left a student side – so used to battling for points – shaken, if not down and out at the bottom of the table.

And unfortunately, the damage inflicted by Spartans could be a sign of things to come thanks to the journey to Peffermill this weekend of the equally free scoring BSC Glasgow.

BSC smashed six goals without reply past Dalkeith Thistle in the cup last Saturday.  Andy Monk, who scored a hat-trick in Dalkeith, will be looking to add to his tally again this weekend given the propensity for the student side to gift easy goals to visiting teams. BSC produced their best performance of the season so far on Wednesday as they thrashed fellow promotion contendors East Stirlingshire at the Indodrill Stadium with Monk again on target.

Edinburgh University will really need to tighten up at the back if they are to stop BSC from heading back along the M8 with 3 points.  The student side do seem capable of sneaking a goal but as with last season it’s the bad habit of losing numerous goals easily that needs to be addressed starting this Saturday against Stephen Swift’s men.

Dalbeattie Star make the long trip to Edinburgh to take on Spartans this Saturday at Ainslie Park.

Spartans come into this fixture having won their previous two games, with a 4-3 comeback win over East Stirlingshire and a 6-1 thrashing of Edinburgh University giving them hope of making it three wins in a row.

Dalbeattie on the other hand have lost to Largs Thistle in the Soccer Shop Challenge Cup and drew with Edinburgh University in their last two games, with their last win coming in a 4-2 win two weeks ago against the University of Stirling.

Dalbeattie will be hoping to pick up a win ahead of some big games in the coming weeks, with games against Bonnyrigg Rose, East Kilbride and Highland League side Huntly in the Scottish Cup all coming in the next three weeks.

Spartans also have a tough run of fixtures on the horizon, with home games against title favourites East Kilbride and Kelty Hearts coming up in the next two weeks for the Edinburgh side.

university of stirling vs east stirlingshire

Chris Geddes’ University of Stirling squad will play host to a Shire team in poor form at Forthbank on Saturday.

Shire have won just one of their previous four games in all competitions, with a 3-1 win over Berwick Rangers sandwiched between disappointing losses to Cumbernauld Colts, Spartans and BSC Glasgow.

University of Stirling however have come back from a mid-season blip in form after not registering a win for three games, having now won their previous two games after beating Caledonian Braves 3-2 and dispatching an impressive Bo’ness United side 3-1 on Wednesday.

Both sides will be aiming for wins as they look to climb the table, with Shire desperately needing to pick up three points if they wish to have any hope of challenging for a league title this season.

Stirling Uni striker Jamie Penker will be hoping to keep up his goalscoring form, as he currently leads the league in goals scored, with nine to his name so far.

Shire will be looking to tighten up defensively on Saturday. After not conceding at all during the opening 5 league games of the season, Shire have now conceded 14 goals in their previous 5 games in all competitions.

Neil Hastings Gala side have been the surprise package of the season so far, currently sitting in 7th place but are only three points behind their opponents up in 2nd. Gala come into the match off the back of six consecutive wins in all competitions, five of them being in the league. Only Bonnyrigg Rose have managed to leave Netherdale with three points this season. Central defender Craig McBride has impressed but will have a tough test marking Kelty’s attackers this weekend.

Meanwhile, Kelty look to be back firing on all cylinders after their BetFred Cup campaign came to an end after a credible fourth place finish in a group of five teams where they defeated Brechin City, drew with Peterhead and also only lost narrowly to Premiership sides St Johnstone and Dundee United. Having Nathan Austin back from injury has also gave them a boost and he netted a brace in midweek in their victory over Cumbernauld Colts.

Kelty have won both times the sides have met at Netherdale, but only narrowly, with the scores ending 0-1 and 1-2.

Anyone lucky enough to have caught a glimpse of the midweek Bonnyrigg Rose versus Vale of Leithen fixture via the live stream would have seen a Vale side ship yet another 5 goals in Midlothian. With the Scottish Borders side finding goals hard to come by, Chris Anderson’s side are already on a stark goal difference of – 36 goals.  The only glimmer of hope this weekend is that Strollers themselves are finding goals hard to come by this season.

Ironically for a team struggling to score goals Vale of Leithen did find themselves 5-1 up last weekend at home against Heston Rovers in the cup only for the game to be abandoned on the 61st minute.  So, Vale can, as they proved against Heston, score goals even if the conditions do eventually thwart them.

Meanwhile, Strollers gained an impressive 1-0 victory over Berwick Rangers in midweek, with Jordan Hopkinson who has re-joined the club after spending time with Tynecastle and Broxburn, netted the winner.

Hopefully the full 90 minutes will come and go this weekend and the fixture is sure to be a little bit more of a tight affair score-line wise given the jump in quality of the visitors.  Even a draw would be welcome for Vale as they attempt to climb off the bottom of the table.

Two of the title favourites meet for the first time this season as East Kilbride head to New Dundas Park to face Bonnyrigg Rose.

Kilby currently sit top of the Lowland League with a two point gap to Kelty Hearts and are the only side unbeaten in the league.

Bonnyrigg are three points adrift in fourth place but would move ahead of their opponents with victory on Saturday.

Rose bounced back from their cup defeat at the weekend with a 5-0 victory over Vale of Leithen while EK beat Caledonian Braves 4-1 on Tuesday.

Both sides have mean defences as they have both only conceded four goals this season.

Gretna have had their last couple of games postponed but before that were on a decent run of form with a 1-0 defeat at Civil Service Strollers bringing an end of two 5-0 wins in a row which saw loanee Lewis McGrattan make the Official Catchup Team of the Month earlier in the week. Gretna have also added former Partick Thistle and BSC Glasgow forward Evan Galasso to their ranks and he will be in line to make his debut.

Berwick’s last game was also a 1-0 defeat at Civil Service Strollers and are searching for their second league win in five games. They have also been given the news that last season’s star player Lewis Barr will need to undergo an operation so will miss out.

The sides drew one a piece when they met in Gretna last January.

Two sides who will be desperate for three points to kick-start their season meet at Broadwood Stadium tomorrow.

The hosts have been inconsistent over the course of the season so far. Their win over East Stirlingshire has been their most impressive result, but have recently suffered back-to-back defeats to Kelty Hearts. Also, last season’s top scorer Marty Wright got his tally underway with a brace against Vale of Leithen a fortnight ago.

The Braves have had a torrid start to the season, with only six points to their name so far. Ricky Waddell has his work cut out with them coming into the game after four consecutive defeats in all competitions. Conceding goals at bad times has been a regular problem, but the return of Ross McNeil at the other end of the pitch could prove to be a vital boost.