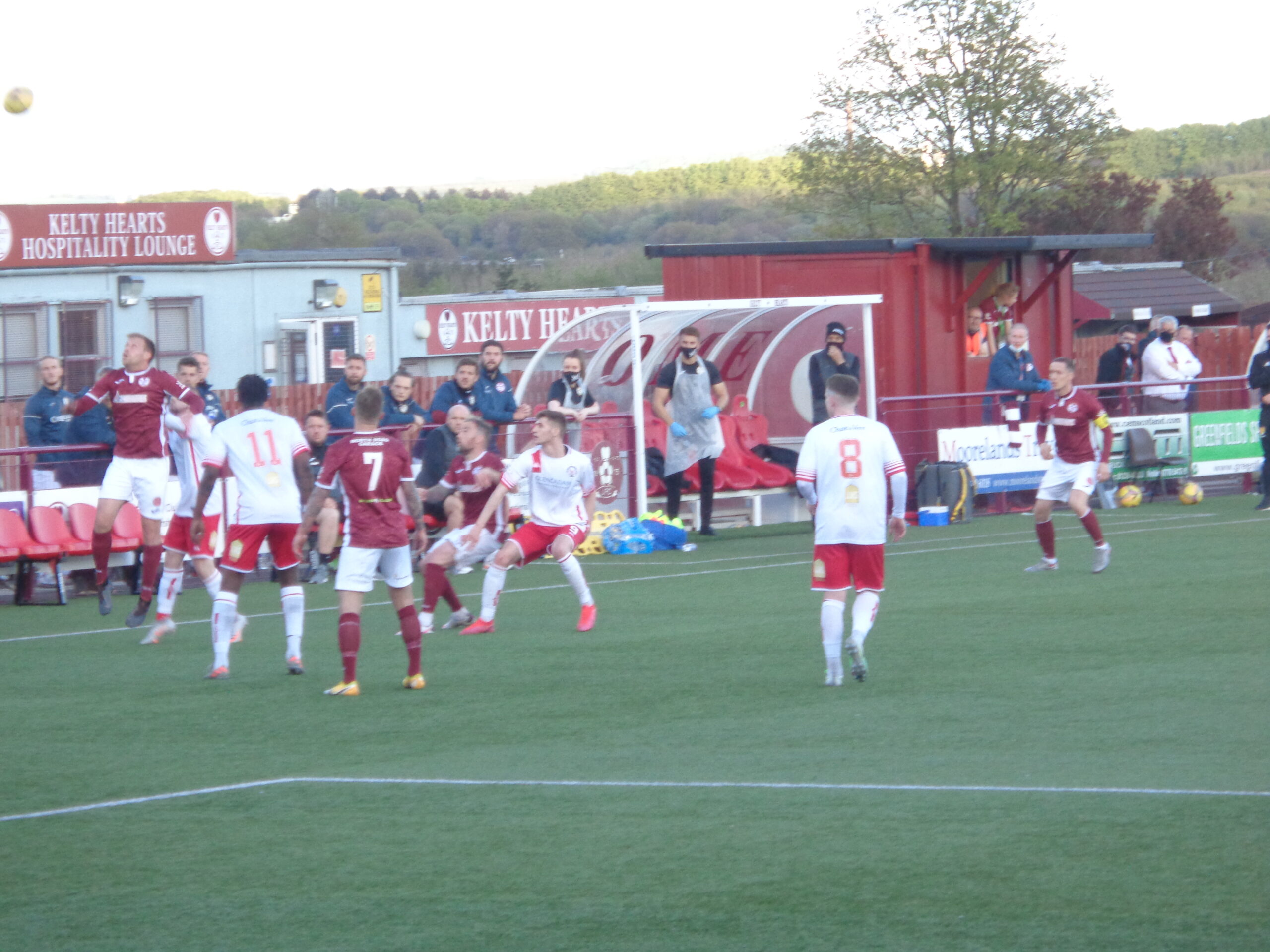 It’s advantage Kelty after the first leg, as goals from Kallum Higginbotham and Cammy Russell gave them a narrow lead before heading to Glebe Park on Sunday.

Brechin City came into the play-off final knowing that its long history in the Scottish professional set up was very much at threat.

With a home ground in Glebe Park – one that would not look totally out of place in the Championship – the Angus side knew that a defeat in the play-off would leave them looking for somewhere else to play football come season 2021-22.

Recent history would appear to be on the side of Kelty Hearts winning through to the SPFL. Both Edinburgh City and Cove Rangers have been promoted over the last 5 years at the expense of the more traditional East Stirlingshire and Berwick Rangers. And given the terrible season Brechin City have had in SPFL2 Kelty Hearts were red hot favourites to be promoted.

On a beautiful night in Fife the opening exchanges showed exactly why Kelty Hearts found themselves such clear favourites. Brechin City’s big and tall defenders were immediately on the back foot and it was the 12th minute before the Angus side found a foothold in proceedings.

Chances came and went for Kelty with Philp striking just wide and a ball from the left sweeping across the goal area with no takers.

But before the first quarter of the game had passed Kelty took the lead through Kallum Higginbotham. Dangerman Austin swept into the box on the right and although his shot was blocked it was stroked home to bring joy to the gathered home fans.

It took that goal for Brechin City to understand that they were in a serious game of football.

Eventually Brechin forced a corner thanks to Kelty’s safety first approach at the back. After it was swept in low by Barr to the edge of the box the home defenders failed to deal with it and Page placed the ball past Jamieson.

A key moment then arrived on 26 minutes.

Cammy Russell replaced Jamie Stevenson and it was the busy play of the substitute that led to him breaking clear and clinically slotting under goalkeeper David Hutton just before halftime.

Certainly with the sun beginning to set it was getting a little colder in Fife. But Brechin City, despite those nervy opening exchanges, began to look more solid and comfortable.

Another corner almost brought an equalizer with only a superb recovery save from Jamieson keeping his team ahead.

Chances came for the home side in the second half although it would be unfair to suggest Kelty Hearts deserved a bigger lead. In stark contrast to the scattered and enthusiastic approach of Brora Rangers, Brechin City looked solid, cool and composed outside of that nervy opening 20 minute spell.

The visiting defenders and goalkeeper captain exhibited a calmness and coolness that the occasion required and they will generally be pleased to have kept the normally lethal Austin silent for the whole game.

The return leg at Glebe Park on Sunday is sure to be a huge occasion for both teams.

After the game manager Ferguson spoke of a hint of disappointment in his team’s performance if not the result. Meanwhile his counterpart at Brechin City Michael Paton said he felt his team had deserved at least a draw.

While behind after this first game Brechin City showed a tactical astuteness that served to frustrate the normally lethal Kelty Hearts and give them hope for the all-important second game.

Brora Rangers had the made the cardinal error of failing to ease themselves gently into a playoff occasion. Brechin City with its ample professional experience probably will not be too worried to find it still 0-0 at half time come Sunday.

In Fife, the Angus side were calm, composed and level headed and they know that with a band of loyal home fans behind them a win over Kelty Hearts is not beyond them.