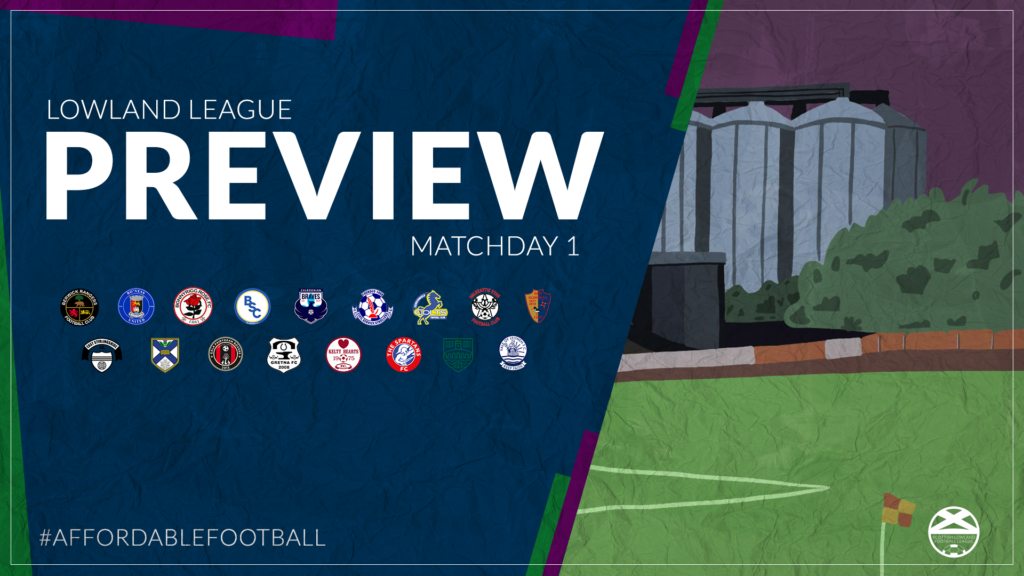 WE ARE BACK! The big preview of Matchday 1 of the new season is here.

Stephen Swift’s new BSC squad will look to start this season off with a confident win in order to showcase how they can take the fight into the top four in the fourth consecutive season. With an array of new players in through the door, BSC will look like a completely different side on paper. Top scorers may have left but impressive signings such as Alfie Agyeman, Andy Geggan and Lyle Avci, just to name a few, with surely bolster an already comfortable BSC squad.

The Star have also improved numbers in the ranks with Dan Orsi joining from Glenafton Athletic as well as, what could be a crucial singing, youngster Connor Potts on a loan deal from Queen of the South. In pre-season friendlies, Maxwell’s men prevailed over Stranraer and Abbey Vale so confidence should be good and they’ll look to rectify last season’s 15th position finish.

Last season, a postponement and 5-0 BSC Glasgow victory were what separated these two sides, however, Star have proven to be a potential thorn in the side as they handed BSC a rare loss the season before.

With a new age of streaming, BSC Glasgow has announced that a handful of their games will be streamed via Twitch with the opener being broadcasted this Saturday.

A postponement and a 4-0 Berwick victory were all that was between these two teams last season who will both be eager to get started and stay away from the bottom six this season.

The new Black and Gold side will want to prove their first season in the Lowland League was a fluke and with new signings such as Jordan Sinclair from Edinburgh City, Lewis Allan from Raith Rovers and defender, Ryan Finnie from Queens Park, it’s easy to see they mean business this year.

The Innerleithen men finished dead bottom last season and will take this season to prove they deserve to be in the Lowland League. New boys, Levi Kinchant and David Bonnar, both from Gala Fairydean Rovers will bolster the Vale squad and hopefully contribute to what would be a massive away victory.

In the pre-season, Berwick experienced a few losses from Stenhousemuir, Raith Rovers and Livingston respectively but having the chance play with big clubs will shake off any rust to prepare them for competitive football. Vale of Leithen on the other hand came out on top over Penicuik Athletic and enjoyed a 6-0 win over Upper Annandale.

Berwick Rangers will be trialling their own streaming service for this Saturday’s fixture and are allowing fans to watch it free of charge for the opening game.

Derek Ure’s East Stirlingshire will play host to Gary Jardine’s Civil Service Strollers side on Saturday as both sides look to kick their season off to a winning start.

East Stirlingshire have brought in a fair number of new faces for the upcoming season while managing to keep hold of some of last season’s key men like Nicky Low, Jamie Dishington, Sean Brown and Jordan Tapping to name a few.

The addition of former Hamilton goalkeeper and UEFA Youth League star Ross Connelly, who has yet to concede a goal for The Shire may also provide some much-needed defensive cover to what was a fairly shaky defence last season.

Gary Jardine’s Civil Service Strollers have become a notoriously tough competitor for many teams around the league since Jardine took over as manager in 2018 and has transformed Strollers into a top 6 Lowland League side.

However, the loss of players like Josh Donaldson, Ryan Shanley and Andy Mair suggests that Jardine will have a tough task to get his squad into the top 6 again this season.

The additions of Hibernian youngsters Connor Young and Jack Bryden alongside Rangers youth keeper Lewis Budinauckas will be hoping to make that task easier for Jardine.

Shire can find themselves fortunate in that they’ve had a successful preseason campaign having not lost a game yet and defeating League One Falkirk 1-0 just a few weeks ago. Strollers have had a mixed bag of results, defeating Whitburn Juniors 4-3 but losing to league opposition in the form of Edinburgh City, Arbroath and Cowdenbeath.

When Shire take on Civil, they are traditionally high scoring games with both teams winning 4-3 away from home last season, while the 2016/17 season saw a 3-3 draw and an 8-3 Shire win.

Gretna 2008 will host Spartans at Raydale Park on opening day as the teams make their final preparations for the 2020/21 season.

Rowan Alexander has had a busy summer as Gretna 2008 manager as he gears up for his first full season at Raydale since 2007. Alexander will be hoping to steer the club clear of the relegation zone that Gretna have perilously resided nearby to over the last few seasons in the Lowland League.

The arrival of loanees Shaun Rodgers, Lewis McGrattan and Darren Hyne from Greenock Morton and Sam Muir from Motherwell respectively should add some much-needed quality while Dylan Cairnie, who is making the step up from the South of Scotland after a successful season at Abbey Vale, will be looking to be the creative spark Gretna have often lacked.

Spartans have also been busy in the transfer market this summer as manager Dougie Samuel looks ahead to his 8th season as manager of the Edinburgh club. The acquisitions of ex-Penicuik midfielder Sam Jones and Dan Baur, who spent the 2019-20 season on loan at Bonnyrigg Rose, are particular standout signings who should both improve a Spartans side which underachieved last year.

Spartans will fancy their chances as they haven’t lost a Lowland League game to Gretna since August 30th 2014, having won every meeting since then.

Lowland League newcomers Bo’ness United go into the new campaign off the back of a promotion from the EoSFL that came with some degree of merit.  Ultimately however, promotion was decided thanks to the confusion of a campaign that was curtailed suddenly due a certain other global situation.

In mid-May the decision was made for Bo’ness United to jump up the league ladder thanks to the SoSFL declaring its league null and void.

Appointed in early 2019, Bo’ness manager Max Christie has spoken keenly about the need for fans to attend Lowland League games.  From the seventh tier and below down south, non-league sides are allowed to admit fans up to 30 per cent of their stadium’s capacity and Christie has said that the situation should be replicated in the Lowland League; or rather his view was that it was a complete ‘no brainer’ for fans not to attend matches in Scotland.

In their most recent friendly, triple Scottish Junior Cup winners BU’s went down 3-0 against EoSFL side Hill O’ Beath Hawthorn; a result that followed on from the more convincing 5-0 win over Crossgates Primrose where local boy Ryan Stevenson got on the scoresheet.

And, while most clubs pre-season preparations have been chaotic, Cumbernauld Colts can take heart from the recent 2-0 friendly win over Blantyre Victoria going into this opening day fixture.

Both teams go into a Lowland League season with a large degree of the unknown hovering over them as to how the approaching season might unfold.  For Bo’ness United this is the first fixture at this level, and they might find the step up just that little bit more difficult than previously promoted for Junior sides have before them.

In hindsight last seasons’ Lowland League campaign was a hugely successful one for Robbie Horn’s side even though it ended in some frustration and indeed with a huge degree of confusion when the season was prematurely called to a halt.

Ultimately the Midlothian side only missed out on a final title push thanks to the points per game formula that was used to determine the final standings. Kelty Hearts were declared champions on a points per game average based on the table positions when the season was halted in March.

The Midlothian side may well again be up near the top of the Lowland League come March 2021 when the title honours are being dished out.  Pre-season has been as stop start friendly wise as lots of teams with games falling by the wayside thanks to amongst other things travel issues and game restrictions.

The core of last season’s Bonnyrigg Rose side – who did so well in both the League and Scottish Cup – remains in place as does the management team headed up by Robbie Horn.  George Hunter is likely, once again, to be a key performer once the season gathers pace.

Border side Gala Fairydean Rovers are one of the teams in the Lowland set up who have chosen to go with an innovative management set up – a Director of football, Manager and Assistant Manager.   This may well again prove to be a factor in the side having a solid and safe presence in the league.  Key man the left sided midfielder Danny Galbraith remains, and his intricate skills and neat play will be crucial whenever any team comes to Galashiels.

The reigning champions begin their quest to defend their Scottish Lowland League title at New Central Park this weekend against Edinburgh University.

Kelty, who started their season in midweek with a narrow defeat in the Betfred Cup to Premiership side St Johnstone. However, they will hope to take confidence from running the Saints close with Michael Tidser getting on the scoresheet.

The Fife side have recruited Darren Jamieson from Arbroath to strengthen their options in goal while Kallum Higginbotham joins and will hope to form a strong partnership with last season’s top goalscorer Nathan Austin.

Edinburgh University face a weird season with the Covid-19 pandemic effecting university life, but they will be aiming to try and improve on their 14th place last season.

The Uni side have a tough opening set of fixtures and will aim to avoid a heavy defeat in Fife like last season.

university of stirling vs east kilbride

Another university side that faces a unique season in University of Stirling as they welcome East Kilbride to Forthbank.

The uni side have kept a large majority of their players and after a mid table finish last year, they’ll be aiming for another top ten finish in 2020/21.

Kilby were only six points ahead of Stirling when the season was finished albeit the university side had played two games more.

East Kilbride have a new man in the dugout in Stephen Aitken and some new faces in the squad with the most notable new arrival being Paul Paton. Lewis Kidd and Kyle Wilkie have also joined the K Park side.

Last season’s seventh place finish was disappointing by their standards and East Kilbride will hope to challenge for the title again this year.

Last year’s meeting saw Stirling take the three points at K Park while the meeting at Fortbank was one of the games that never got played.