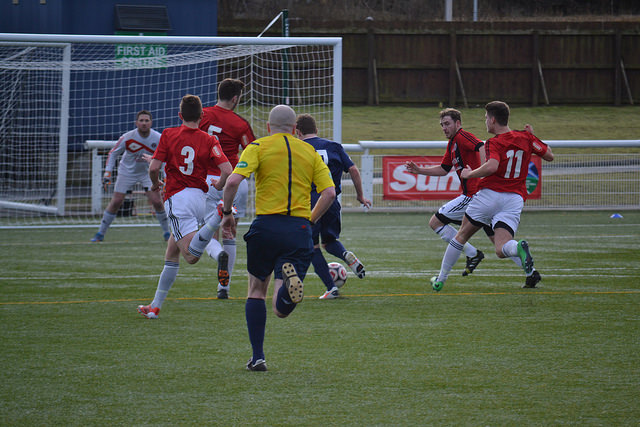 A roundup of all the action from today’s Ferrari Packaging Lowland League.

Newbies Hawick Royal Albert made the journey to face BSC Glasgow at the Indodrill Stadium.

The borders side took the lead with just nine minutes on the clock thanks to Josh Morris.

A corner was played in and only cleared as far as Morris, he hit the ball on the volley and it found it’s way into the net.

Aiden Ferris levelled for the home side just after the interval when Aidan Ferris got on to a near post ball and headed in the net.

Ferris fired the home side in front with minutes to spare, he was played by Corrieri and slotted the ball into the net.

In injury time Ferris got his hat-trick when he got on the end of a rebound and smashed the ball over the line.

East Stirling wasted no time in taking the lead when they visited Ferguson Park.

The home side gave away a free-kick in the first minute and Jamie Glasgow stepped up and fired the ball into the net.

Andy Martin levelled the game when he got the rebound from a corner.

The Shire went ahead moments later when Paul Sludden broke away from the defence, his first shot was saved but he slotted the ball into the net at the second time of asking.

Martin got his second of the afternoon when a cross was played and the striker’s powerful diving header saw the ball smash into the net.

Derek Ure then put Shire ahead when his powerful freekick found the back of the net.

Minutes later Glasgow got his second of the day with a perfectly placed strike.

David Grant scored late in the game to ensure the visitors left with all three points.

Elsewhere Dalbeattie Star took all three points against Edinburgh University thanks to a Tommy Muir goal on the half hour mark.

In the Football Nation Qualifying Cup Gala Fairydean Rovers made the trip to Ainslie Park to face fellow Lowland League side Spartans.

The home side found themselves behind when Jack Hay headed the visitors into the lead when he got on the end of a McCombe cross.

Their lead was short-lived and five minutes later Eddie Malone put his foot through the ball to hammer home the equaliser as Gala failed to clear lines from a Jack Beesley corner.

Spartans almost took the lead when Beesley was played in, he broke through one on one with the keeper but sent his shot the wrong side of the post.

Davey Greenhill put the home side into the lead just before the interval when he picked up the ball and from about 25 yards out curled the ball over the keeper and into the net.

Jack Hay scored his second of the afternoon on the hour mark, he was played in and his first time effort with the side of the boot left the keeper with no chance.

With the playing flowing from end to end Chris Townsley put the home side in front, he got on the end of a cross and nodded the ball into the net.

With ten minutes to go Jamie Dishington got Spartans fourth of the day and Greenhill got his second of the match in the closing stages.

In the other games Civil Service Strollers beat Peebles Rovers 2-0.

University of Stirling eased through to the next round beating Ormiston 5-1.

East Kilbride hit Gretna for six when they visited Raydale, Gretna got one back late on in the game.

Vale crashed out of the cup losing to Heriot-Watt 2-1.