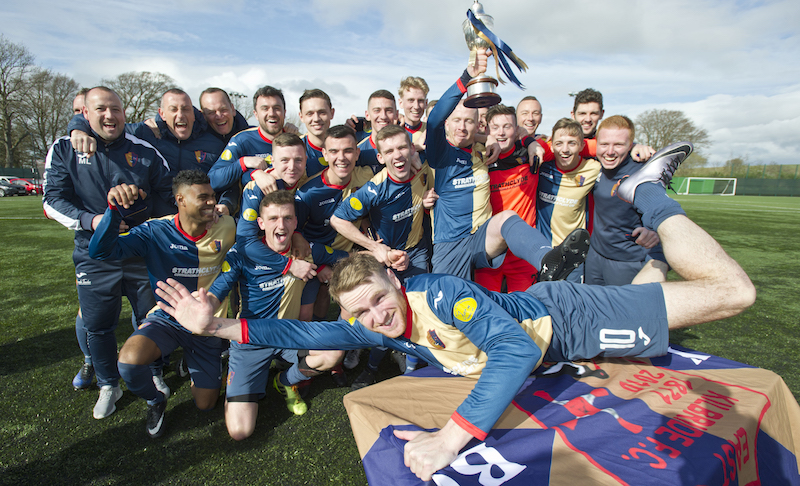 Around 400 fans turned up to yesterday’s (SAT) presentation that followed their game against Edinburgh side, Spartans.

Tony Ferrari, Managing a Director of the league sponsor Ferrari Packaging, was on hand to present the trophy to his local side.

“It has been a tremendous journey for East Kilbride since joining the League.

“The Scottish Cup tie against Celtic is an obvious highlight along with Ajax’s recognition of East Kilbride’s tremendous winning run.

“Not bad for a team which had not played a professional match four years ago.

“Many expected the Lowland League to recruit ‘established’ clubs and eyebrows were raised when East Kilbride were elected to membership.

“There is always an element of risk in accepting a club that did not have a proven track record but we soon understood East Kilbride’s vision after which offering the club membership became an obvious decision.

“The success – from a cup win in the first season to becoming this season’s Champion Club – has fully vindicated the belief that East Kilbride would become a force in Scottish Football.

“The Lowland League has grown from an ambitious idea and thirteen founder members four years ago to becoming a pivotal part of the Pyramid and increasing interest in becoming part of the League.

“Finance is important for any sporting organisation and it is appropriate to recognise the excellent support we have enjoyed from Ferrari Packaging as our sponsor for the last two seasons.

“It gives me huge pleasure that Tony Ferrari presented the Championship Trophy to them.

“On behalf of everyone in the Scottish Lowland Football League, wish East Kilbride every success and hope they can follow Edinburgh City’s example by winning promotion to the SPFL.”

East Kilbride will become only the second Lowland League team to take part in the playoffs for a position in the Scottish League.

The first match is in the Highlands on 29th April with the return at K Park on 6th May.

Dave McKenna, East Kilbride secretary, said: “When East Kilbride FC was founded in 2010 and admitted to the inaugural Lowland League in 2013, the vision was to provide the town with a Club playing in the senior ranks.

“The journey has been remarkable, the learning curve steep, making many new friends on the way.

“On and off the park it has been quite a story.

“Cup success each season has now been surpassed by the winning of the Ferrari Packaging Lowland League.

“In itself, this is an achievement that everyone connected to the Club is hugely proud of.

“The standard within the League has been improving year on year and this season required our very best to prevail.

“We eagerly await the outcome of the Highland League competition, looking forward to a visit up North on 29 April and the second leg at K Park on 6 May.

“That will be another step in the journey.

“Our sincere thanks go to sponsors, supporters and the unsung heroes throughout the Club that have helped us get this far.

“Our tag line ‘Be part of the journey’ has never been more appropriate.”