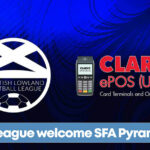 This proposition allows the three guest clubs to participate in the Lowland League for season 2022/23. In addition, the respective league bodies have agreed to participate in the Scottish FA’s pyramid working group discussions aimed at providing a longer-term solution to optimise the structure and aid the transition of talented players between the ages of 17 and 21.

Following a positive vote, the plan commits to the following:

Ian Maxwell, Chief Executive Scottish FA: “We are delighted that the Lowland League clubs have approved the participation of three guest clubs for the forthcoming season. The Scottish FA supports the principle of elite player development and particularly providing opportunities for talented players in the key transition years from 17 to 21.

“The Scottish FA will oversee a discussion in parallel to propose and implement a long-term plan with the objectives of optimising the pyramid, which has been a resounding success in Scottish football, harnessing the player pathway and accelerating the development of the country’s most talented young players through the national youth teams to the full international stage.”

Thomas Brown, Chairman, Lowland League, said: “We were always open to the inclusion of guest clubs for a further season given the successful player development outcomes from last year’s pilot.  We want to be a modern and progressive league and we are excited to be playing our part in the eco system that develops Scotland’s talent.

“Importantly we now look forward to working with the Scottish FA, the SPFL and our friends in the pyramid to create some new solutions to some existing challenges which will provide a bright future at all levels of our game.”

Neil Doncaster, Chief Executive, SPFL, said: “It is hugely encouraging to see such a joined-up and collaborative approach being adopted in such a vital area of our game.

“There are few more exciting things in football than watching the development of home-grown talent and it’s extremely encouraging that the Lowland League has agreed to assist our clubs on a temporary basis for Season 2022/23.

“The SPFL will commit our energies to a process that will explore options and, hopefully, allow us to move forward various aspects of our game for the benefit of our 42 member clubs and Scottish football as a whole.”