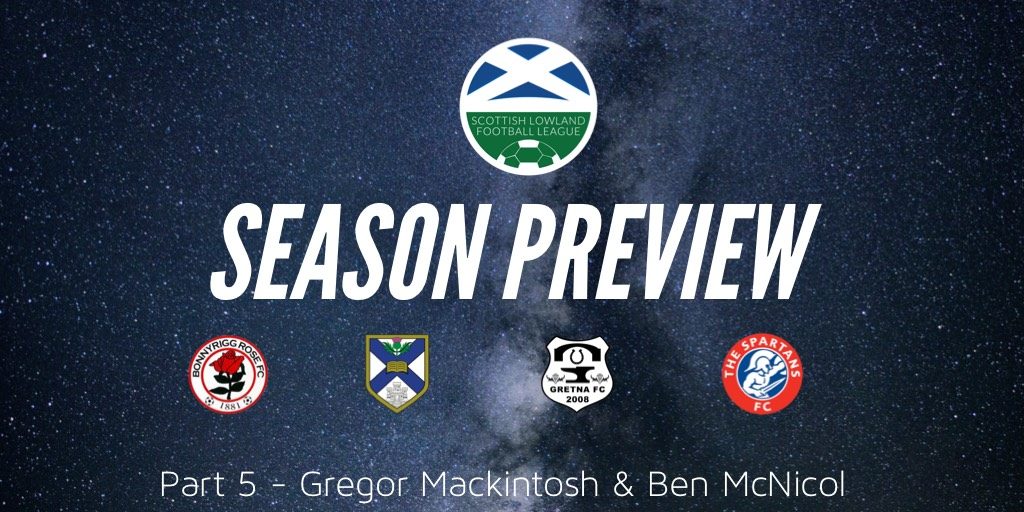 It’s the final section of our season preview. Our two new writers Gregor Mackintosh and Ben McNicol tackle the final four clubs ahead of tomorrow’s kick-off.

Bonnyrigg Rose will embark on their first ever Lowland league campaign after gaining promotion from the East of Scotland leagues. Bonnyrigg finished in 1st place in the East of Scotland Conference B after putting together a 20 game win streak. They then played Penicuik Athletic and Broxburn Athletic in the championship play off which saw them gain promotion, despite initial concerns over licensing issues.

Bonnyrigg Rose have made some improvements to an already solid side as they brought in goalkeeper Mark Weir from Wichita FC in the USA. Defender Daniel Baur has also joined on loan from Hearts until January 2020. Midfielder Jamie Docherty joins from St Johnstone having spent much of last season on loan at Lothian Thistle. Striker George Hunter comes in from Newtongrange Star and midfielder Scott Gray has also returned to the club over the summer after working for football academies in the USA and Mexico.

Aaron Murrell and Dean Hoskins have both moved on, with both players joining The Spartans over the summer. The Rose have managed to keep a large core of the squad together for their first ever Lowland League season after many successful years in the Junior leagues.

Pre-season has seen Bonnyrigg draw 1-1 with Leith Athletic, before suffering 1-0 and 2-1 losses to Whitehill Welfare and Clyde. A 2-1 win over Tranent Juniors and a 2-0 win over Rossvale followed and a 0-0 draw with Bo’ness United capped off preseason. Bonnyrigg begin with a home game to Vale of Leithen in their first ever Lowland league season.

Dean Brett is currently in his second spell with the club, having initially signed in March 2017 after some off the field issues caused his contract at Cowdenbeath to be terminated, where he had made over 140 appearances. He then moved to Montrose in summer 2017 but left just a few weeks later. He rejoined Bonnyrigg Rose in summer 2017 and is a versatile player who can play in defence or midfield. His versatility could prove valuable in what appears a relatively small squad for the upcoming season.

Edinburgh University are a team who are always hard to predict at this time of year. The Uni team normally tend to finish around the bottom half of the table, but in the 2015/16 season they actually finished sixth in the Lowland League but the increase of standard throughout the division will make this difficult to repeat.

Most of “The Uni’s” signings will come in September, when the trials start for the squad after students return from their summer. The only departure to note for the East Peffermill side, was Finnish midfielder Santeri Kuivalainen, leaving the club to join Otago University in New Zealand.

The University side tend to struggle in the early part of the season due to the squad not being as strong as they would want it to be, but last season they actually started the season well and found themselves in fifth before going on a horrible 12 game winless run which led to them dropping down the table and finishing 11th of the 15 team league.

They shouldn’t be underestimated however, as Dorain Ogunro’s men are a very hard working side and they are more than capable of toppling one of the big boys. Last season they beat East Stirlingshire and also Cumbernauld Colts.

Edinburgh University’s first game of the season comes against Caledonian Braves at East Peffermill this weekend.

An experienced central midfielder who often doesn’t get the credit he deserves and is pivotal to Ogunro’s sides success. Has been almost ever present in recent years providing the steel in front of the back four and being capable of bringing the strikers into play with his range of passing leading to assists. Didn’t find the back of the net last season but did net three times in 2017-18.

With the Lowland League being more competitive than ever this season, it will be interesting to see how Gretna 2008 fare under new gaffer Chris Humphrey this season. The former Motherwell man took his first step into management as he was appointed manager of The Anvils in April and is tasked to try bring Gretna back up the Lowland League table after least seasons lowly finish.

There has just been the two signings for Gretna so far this summer, with Darren Addison returning to the club as the 32-year-old midfielder re-joined from Carlisle City. They have also signed Odaine Demar, who is a currently a full internationalist for Jamaica. The defender, who tends to play in centre-back, joined Gretna from Australian side Clarence United.

The most important piece of summer business for the Gretna has to be managing to keep hold of striker Kevin Connelly and his striking partner Daniel Smales. The Englishman scored 12 goals for The Anvils last season after notching 15 the previous season and is a key asset to The Black and Whites. Smales managed to score nine last season, so between the two front-men they scored near enough half of Gretna’s goals.

Gretna set up and under 18s team earlier in the summer after handing our numerous trials, which should help create a path for youngsters to step up into the first team in the future.

Chris Humphreys men have had a busy schedule throughout pre-season. They started by suffering a 7-0 defeat to Premiership side Motherwell, but they responded well with 1-1 draw with Milnthorpe Corinthians, before hammering Kendal Town 5-2.

However, The Anvils ended their pre-season on a low as they were beaten 3-1 by Threave Rovers before they were decisively beaten 4-1 at home by Workington AFC.

Grenta’s first game will be on Saturday when they welcome Civil Service Strollers to Raydale Park.

A 22-year-old central defender who has a big season ahead of him if Gretna are to have an improved campaign compared to last season. Will look to form a solid partnership at the back with experienced Jamaican internationalist Odaine Demar. Wadge has now tallied up 77 appearances for the Raydale Park side and collected the supporters Player of the Year award last season and will be a key figure for Humphrey’s men as they will look to be stubborn to defeat and pick up positive results against tough opposition.

Spartans finished 4th in the Lowland league last time out, perhaps a disappointing season as they would have looked to build on their league title win the previous year. Spartans ended the campaign fairly strongly as they demolished Cumbernauld Colts 6-2 at home in their final league game of the season before embarking on a run to the Lowland League Cup semi finals where they were eliminated by The Shire.

As the teams around Spartans have strengthened heavily, Spartans have flown under the radar with some impressive signings of their own, namely experienced centre back Michael Bolochoweckyj from Montrose as well as Bonnyrigg Rose duo Dean Hoskins and Aaron Murrell. Dale Baxter has also been brought in from Gala and Gregor Woods has joined on loan from Hibernian for the upcoming season.

However, some key players have moved on over summer with talented winger Jamie Dishington leaving to join The Shire and defender Gary Cennarazzo joining Kelty Hearts. Youngsters Callum O’Neil and Lewis Hall have both departed to Vale of Leithen.

Pre-season has saw Spartans defeat Keith FC 2-1 in their opening preseason game, before succumbing to a 2-0 loss at the hands of Raith Rovers. A goalfest with Musselborough Athletic followed as the teams drew 4-4. Spartans then took on their highly anticipated match against the Liverpool U’23s where they lost 1-0. A 3-1 win over Jeanfield Swifts got things back on track before a 2-1 defeat to Dalkeith Thistle rounded off preseason for Spartans.

A vastly experienced centre back who has spent most of his career in League 1 and League 2, Bolochoweckyj will add to a notoriously successful Spartans defence who are able to frustrate teams with their defending. Bolochoweckyj is also capable of chipping in with some goals from set plays and looks to be a fantastic addiction to the Spartans side for the upcoming season.