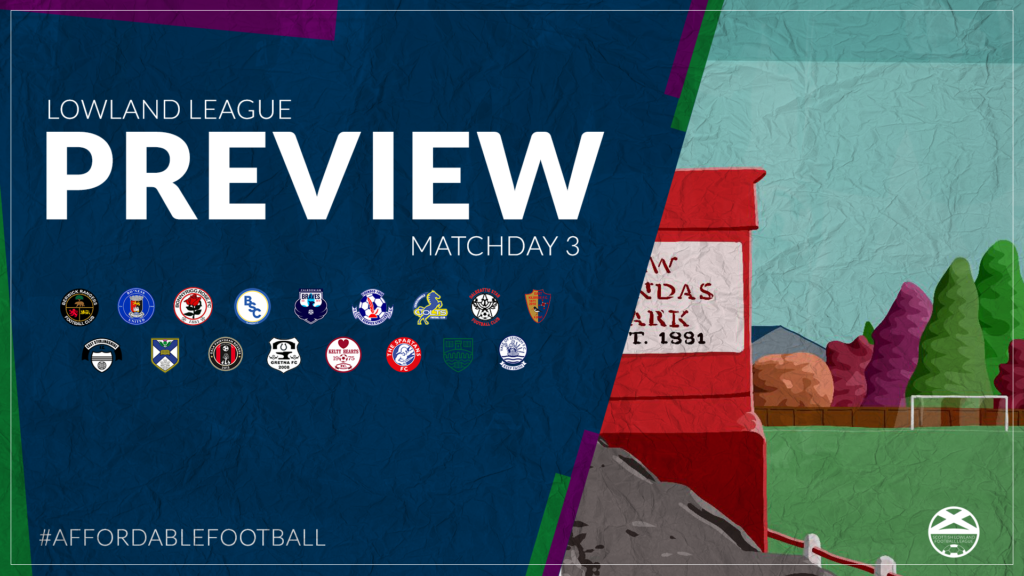 After a busy opening week to the season, we are back for more on Saturday

We’ll again be adding each game to this page as the previews come in, and announcing each one on our social media channels.

spartans vs university of stirling

Two sides who will be happy with their opening two fixtures meet in the capital on Saturday with Spartans looking to continue their perfect start.

Dougie Samuel’s side have collected maximum points so far after victories over Gretna 2008 and Berwick Rangers. Their midweek fixture with the Wee Gers looked to finish as a stalemate before Cameron Dawson headed home an 89th minute bullet header. That made it 2 goals in 2 games for the towering striker this season who will be aiming to nail down that number 9 shirt after being patient the past couple seasons, with most his minutes coming from the bench and spending time out on loan.

For the visitors, Chris Geddes’ men ran East Kilbride all the way on the opening day of the season before falling just short in a 2-1 defeat but bounced back with an impressive victory on their travels at Cumbernauld Colts during the week. Jamie Penker has scored in each game as the students have retained the core of last season’s squad for the new campaign. Those names include young keeper Ben Fry, Matthew Burrows and Ben Quigley at the back, with Craig Brown and Jason Jarvis who all impressed last season to name just a few.

The results between the sides last season were a mixed bag. Spartans won 3-2 at Ainslie Park in the league, but Stirling won 3-2 in Edinburgh in the Soccer Shop Challenge Cup, with the reverse fixture at Forthbank in the league ending 0-0.

Edinburgh University go in search of their first points of the season when they welcome newly promoted Bo’ness United to East Peffermill on Saturday.

The students have had a tough start to the campaign as they’ve faced title contenders Kelty Hearts and East Stirlingshire in their first two games. The Kelty match resulted in a 4-0 loss but they improved at home to Shire on Tuesday night. Dorian Ogunro’s men got into half time at 0-0 but a red card on 40 minutes put them up against it and they ended up losing 2-0. Uni were bright in spells and will be hopingmthat first goal and point will come on Saturday.

However, their task doesn’t get any easier as they welcome a Bo’ness side who have made a perfect start to the season. Cumbernauld Colts were defeated 2-1 last Saturday before a man-of-the-match performance from Nicky Locke steered the BU’s to a 4-0 win over Vale of Leithen on Wednesday. New signing Kyle Bell scored on his debut after he joined on loan from East Fife and Max Christie has recently added former Edinburgh Uni defender Stuart Macfarlance to bolster the team.

Bonnyrigg Rose go in search of a third consecutive victory to start their Scottish Lowland League campaign when they welcome Gretna 2008 to New Dundas Park this weekend.

Rose, who are yet to concede this season after 4-0 and 2-0 victories over Gala Fairydean Rovers and Caledonian Braves. They have signed left back Dean Hoskins from Spartans during the week and have allowed young trio Nicky Weir, Robbie Neave and Arran Laidlaw to join Vale of Leithen on loan.

Gretna 2008 could consider themselves unfortunate with their fixtures as they search for their first points of the campaign as they face last year’s runners-up after an opening two fixtures against former league champions.

A late Cameron Dawson penalty denied the Anvils a point on the opening day before a heavy defeat in midweek from East Kilbride.

The corresponding fixture last year was one of the games that never got played but Rose triumphed in Gretna 2-1 last September.

Caledonian Braves and Berwick Rangers meet at Alliance Park this weekend hoping to bounce back from midweek defeats.

Braves were beaten at New Dundas Park by Bonnyrigg Rose 2-0 while Berwick suffered a late defeat away to Spartans. Another sour note from the Braves game was that key striker Ross McNeil limped off injured during the defeat. However, Braves have bolstered their attacking options by re-signing Ahmed Bouchentouf and World Cup winner Pierre Mankowski has joined the club as a football advisor.

Caley Braves, who were the team missing from the first matchday, have only won one of their last four competitive matches at Alliance Park but drew 2-2 with Berwick last season.

Calum Smith has impressed the Wee Gers fans so far this season after picking up their Social Media man of the match award from both their games.

Berwick won on the opening day against Vale of Leithen after a stunning free-kick from Jordan Sinclair and are aiming for a first away win in the Lowland League since beating Edinburgh University last August.

East Kilbride will be looking to extend their lead at the top of the Lowland League when they welcome Gala Fairydean Rovers to K Park on Saturday afternoon.

Kilby backed up their opening day victory away at Stirling University with the 6-1 thrashing of Gretna during the week, with summer signing Steven Old scoring twice from set-pieces.

However, another tough challenge awaits this weekend as they welcome Gala Fairydean Rovers to K Park. Neil Hastings’ men slumped to a disappointing 4-0 opening day defeat against Bonnyrigg Rose, but bounced back with a 3-2 win away to Dalbeatie Star on Tuesday night.

If records are anything to go by, there will only be one winner this weekend as the visitors haven’t beaten East Kilbride in the last night attempts, their last win against the Lanarkshire side coming all the way back in 2015.

Unfortunately we don’t have full match previews from the other games due to a s shortage of writers, but Vale of Leithen go in search of their first points against and unbeaten BSC Glasgow side. The match will be streamed on Twitch by Mozza Plays. Dalbeattie Star host East Stirlingshire and Civil Service Strollers welcome Kelty Hearts to the capital, which will be streamed by the Strollers.