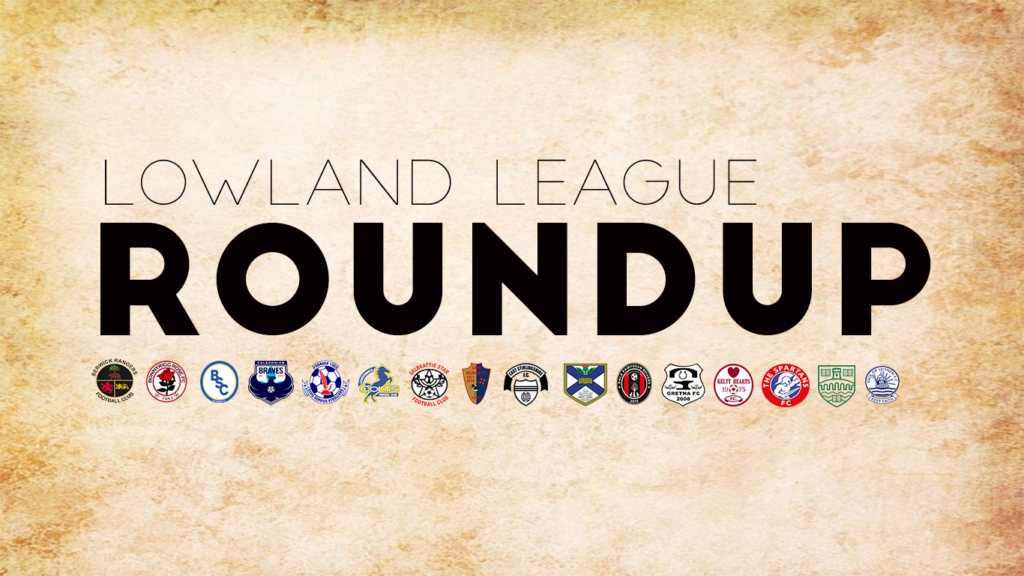 The new Lowland League season kicked off in style on Saturday and our reporters have all the action from the weekend’s matches.

The opening weekend saw two Lowland League heavyweights BSC Glasgow and East Stirlingshire open their respective seasons to each other for the 3rd season in a row. This highly anticipated game ended in a 1-1 draw at a wet Indodrill Stadium.

Both sides started off fairly well, with The Shire probably having the better chances of the first half. BSC had a free kick from Declan Hughes go over the bar in the 20th minute before The Shire won a corner where Mark Millar’s cross was met by Jordan Tapping, who had his header bounce off the ground before it landed in the back of the net past a helpless Ryan Marshall in the BSC goal. From that point on the Shire looked to be in control of the game, with BSC Glasgow’s only other noteworthy chance being a Martin Grehan header which went past the post. Nicky Low forced Ryan Marshall into a decent save, before Bobby Barr was set free on a counter attack but a rather questionable shot/cross from Barr ended the first half with The Shire 1-0 up at the break and BSC struggling to create against a solid Shire defence.

The 2nd half saw BSC start strongly as they forced a good save from Jamie Barclay from a low driven shot right off the bat. Some good clean passing play from BSC saw new signing Jamie Hamilton have a curled effort from outside the box caught by Barclay in the Shire goal. BSC were then awarded a penalty after Shire centre back Connor Greene appeared to bring down BSC striker Tommy Orr. Orr took his penalty well as he placed it low and hard into the bottom right corner, Shire keeper Jamie Barclay came agonisingly close but wasn’t able to keep it out of the net. BSC looked to be in control of the game for the rest of the second half although neither team looked capable of getting another goal. The Shire had some debatable penalty shouts denied by the referee and created their only real chance of the second half from a back post Connor Greene header which hit the side netting. Things turned ugly at the latter stages off the game with yellow cards being given out and a scuffle erupting   saw some pushing and shoving from both teams as both teams became rather frustrated.

Overall, a 1-1 draw was probably the fairest result as Shire controlled much of the first half and BSC dictating much of the second, although both teams will be feeling they should have pushed on and won the game. BSC are back in action on Tuesday night with an away game against Spartans, while Shire will host Edinburgh University on Wednesday night.

The newly renamed Caledonian Braves got off to the perfect start for their first season as a rebranded Lowland League side while this opening fixture will be one to forget for the University side.

Fans didn’t have to wait long for the first goal as Ross McNeil opened the scoring only 4 minutes in. The rest of the first half seemingly went 50/50 with Dorian Ogunro’s boys fighting for an equaliser.

The Braves came flying out the gate determined for more as the second half commenced and it was debutant Blair Docherty who grabbed the second goal of the game shortly before David Sinclair smashed home a free kick. Neil McLaughlin also got in on the scoring to make it 4 and Ross McNeil and Blair Docherty finished the Edinburgh side off by securing braces and cementing a solid 6-0 victory for a dream opening day for the Braves.

GOALS | All six goals from the opening day of the season win over @EdinburghUniAFC. Big thanks our opponents for letting us use their footage as well 👊⚽️ pic.twitter.com/9yQLXKJLUW

It wasn’t the best afternoon for the Fairydean as their opening fixture hosting the Colts saw the away side grab three goals and the three points.

The first goal never came until the half-hour mark when Marty Wright slotted it home in his first competitive match for Colts. The travelling Cumbernauld faithful had to wait until the second half for another goal at Netherdale when Lewis Bonar found the back of the net. Two minutes later Stephen O’Neill grabbed the third to properly secure an opening victory.

The Galashiels men will hope to bounce back in their mid-week fixture while Colts will fight to continue on from this convincing victory.

We’ve added the few photos we did get from today’s game into an album over on our Facebook page! Go check them out 👀 📷 🔴⚫️ pic.twitter.com/SmPtE9MgeV

Kelty Hearts put out a statement of intent on Saturday as they demolished Dalbeattie Star 8-0 at New Central Park.

The Hearts have invested heavily throughout the pre-season by bringing in significant signings to try mount up a title challenge and it’s fair to say that Barry Ferguson’s men couldn’t have got off to a better start.

The Fifers weren’t messing around as they opened the scoring after just six minutes on the clock. After Nathan Austin was fouled, Scott Linton stepped up and curled his free kick into the top corner to put the home side ahead.

Kelty continued to dominate proceedings and doubled their lead on the 34th minute. Dylan Easton breezed by Curtiss Wilson on the left-wing before driving into the box and setting it up on a plate for Stephen Husband to slam home from six-yards out.

Two minutes later it was three-nil and this time the roles were reversed as Easton slotted home. The 25-year-old took down a long ball brilliantly before twisting and turning Lee Wells and firing low into the far corner by Vinnie Parker.

The Stars ship had well and truly sunk as Nathan Austin notched a quick fire double to open his account for his new club within two minutes of the re-start to have Kelty 5-0 up. Firstly, when a long ball forward by Danny Ashe beat the whole Dalbeattie Star backline, allowing Austin to control it and slot it home beyond Parker.

The fifth goal was the exact same combination and it produced the same outcome. A punt forward beat the two centre-backs allowing Austin to sneak in behind and power a half-volley home.

It was beginning to turn into a rout as Husband scored his second, which was a beauty. A quick throw-in caught the visitors midfielders napping, allowing Husband to pick up the ball, dribble forward and send his curling effort into the top corner from 25-yards out to make it Kelty 6-0 Dalbeattie.

Things just continued to get worse for the away side as The Hearts were awarded a penalty on the 57th minute after Easton was pulled down inside the box. Austin stepped up coolly slot home to complete his hat-trick.

Dalbeattie must have been in a huge state of shock after conceding four goals in twelve minutes, but luckily for them Barry Ferguson’s men took the foot off the gas as they were in cruise control. Sometimes being in complete control is a hard thing because the home side began to lose concentration and allowed Dalbeattie a few efforts at goal, something they hadn’t seen all afternoon. They had an excellent chance to pull one back when Ben Irving burst down the wing before his cut-back found Wells, he laid it off to Steven Degnan,  who was just about to pull the trigger but Husband got back to put in a vital sliding challenge.

The home side began to take off their key players with Ross Mutch, Stuart Cargill and Ross Philp coming on to replace Nathan Austin, Dylan Easton and Chris Dodd.

The two substitutes linked up to make it 8-0 and seal off a fantastic day for The Fifers. Philp ran down the line before squaring the ball to Mutch to tap home.

It was a day to forget for Dalbeattie, and life doesn’t get easier for “The Star” as they host East Kilbride on Wednesday evening. As for Kelty, their confidence will be sky high after Saturday’s excellent performance and they will fancy their chances against Caledonian Braves next weekend.

Bonnyrigg Rose got their first season in the Lowland League off to a flyer as they ran riot against Vale Of Leithen, winning 6-0.

There was a couple of concerns pre-match around 12pm on Saturday afternoon about the surface after some rain, so it had to undergo a pitch inspection, which it passed.

The Rose dominated the opening 20 minutes despite a penalty appeal for Vale being waved away, and were awarded for their dominance when they took the lead on the 23rd minute through Kerr Young, when he headered home a cross to score on his 150th appearance for The New Dundas Park outfit.

A couple of minutes later The Rose doubled their lead when Scott Gray’s cross was slid home at the back-post by George Hunter to put the Midlothian side in the driving seat.

Robbie Horn’s men went on to hit Leithen for another four in second half to chalk up a huge win.

On the 63rd minute it was 3-0 and again it came from a cross, something the visitors were seemingly struggling with. This time the cross towards the front-post was flicked over Gilpin by Kieran McGachie.

It looked as if the roof of the visitors defence well and truly fell in as The Rose made it 4-0 on the 65th minute when Dean Brett went on a solo run before finishing brilliantly by Gilpin.

The newly promoted side went on to score two more late goals through Jamie Docherty and Lewis Turner to make it 6-0, rounding off a fantastic win to start the season. Surprisingly it wasn’t the highest scoring result in the Lowland League on Saturday afternoon as Kelty Hearts beat Dalbeattie Star 8-0.

Thanks to all of the (418) supporters that attended our first ever Lowland League game today. We would also like to thank @ScottishFA President Rod Petrie who presented Secretary Robert Dickson with our SFA membership award. Worth waiting for. 🌹 pic.twitter.com/1AsuQoVNqd

The Strollers opened their account for the season with a comprehensive victory at a rain-sodden Raydale Park.

A goalless first half saw few chances, in a game that the weather seemed intent on winning. Gretna looked the better side, with Ashley Neto causing problems down the right, though the Strollers carved out the pick of the chances.

With the rain failing to let up, the second half looked in doubt. Once a puddle had been swept from the goal line, however, play resumed.

Mark McConnell’s superb header gave the Strollers a deserved lead from Scott Main’s corner, as they started to dominate the game. Forward Jack Downie soon made it two, chipping goalkeeper Cameron Copland with a superb floating shot into the top corner.

But for Copeland, it could have been so much worse for the Anvils, who had to weather the storm in the second half. It got even worse for them when David Renyard saw red for a kick on Scott Main.

Jack Downie was at the centre of the Strollers’ dominance, and he capped off a strong performance with his second and the Strollers third late on, tapping in from six yards.